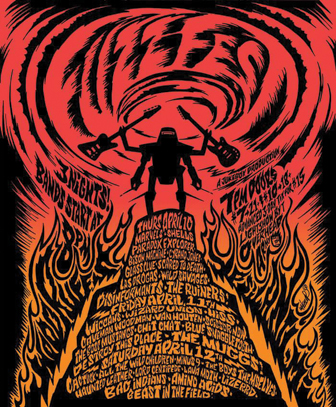 We get a lot of “fests” around here, but this one’s inspired by a specific sound. It’s a sound, as famed proto-punk outfit MC5 once sang, that “abounds and resounds and rebounds off the ceiling…”

Actually, it’s an effect. Not to get too technical, but you know – how Mudhoney glorified their effects pedals like the Univox Super-Fuzz and Electro-Harmonix Big Muff. It’s a dazzle of distortion.

Blue Snaggletooth, a metal-inclined, sci-fi inspired psych-rock outfit from Ann Arbor, leads the way – with lead singer/guitarist Chris Taylor’s wife Theresa encouraging him to do so after his band played the last YpsiFest. Thinking the name she suggested had a nice ring to it, he started conjuring the image of a band blasting out loud, high-energy rock music “with the sound of heavy droning riffs and guitar feedback. So, those are the types of groups I asked to play…”

That was a different Blue Snaggletooth, we should mention; but that’s another story. By the end of 2012, all the original members had left the group. Again, Theresa (along with friends) encouraged Taylor, whose resume includes tenures with Powertrane, Mazinga and more, to continue his musical journey, or, rather, to “…find some new people to jam with…” Blue Snaggletooth’s members were once fans of the Ann Arbor outfit, now they’re in it–Casey O’Ryan on guitar and Joe Kupic on bass. Mike Popovich joined on drums last October, but let’s list some of the bands on FuzzFest:

Lizerrd, Bad Indians, Chit Chat, Beast In The Field, The Amino Acids, Destroy This Place, The Boys Themselves, Shells (Shelley Salant) and many more – more than 30 bands in three nights – at Woodruffs in Depot Town.

“We’re lucky to have so many music festivals,” says Taylor. “Mittenfest, Totally Awesome Fest, YpsiFest. There’s plenty of room for Fuzz Fest in that mix.”

Anthony Gentile (of Lizerrd) has hosted YpsiFest nine times, well aware that a fest’s title can be overly suggestive, (i.e. not every band that plays his fest is from Ypsi, far from it). “To me, ‘fuzz’ encompasses so much while still making it clear we can expect some blissed-out fuzz-tones throughout the weekend. I’m really glad to be part of this great line-up. Practicing at (Jeremy) Wheeler’s space in Ann Arbor, where Chris practices and where they work on The Bang, so I know those guys put a lot of hard work and thought behind their creativity. I expect the same for Fuzz Fest.”

In terms of what styles of music to expect – could be psychedelic, drone, noise-pop or shoegaze. Could be feedback-heavy hardcore punk or just surging metal… Could be a lot of things. “I’ve never understood labels,” said Gentile. “What (Taylor)’s done, I presume, was name it after a sound and not something that could be hijacked by appearance or pretense. It isn’t limited to one community of music so to speak.”

That sound can really just hint at descriptions, but it “goes beyond that,” as Nehring notes. “Like, Wiccans, one of my favorite bands on this bill, doesn’t use any fuzz on stage.”
That said, let’s talk about “sounds.”

“I’m a space-head in many ways,” Gentile said. “I love music with an edge, and lots of times people will find their unique sound or vibe through their effects as well as their natural playing style. To me, the attraction is super-obvious and yet elusive.”

Shelley Salant, who performs with Fred Thomas (of Saturday Looks Good To Me) with Swimsuit, prefers to keep it simple. “I only use two pedals, at most. I prefer to overdrive the amp and use overtones as opposed to distortion pedals, at least in this project.” Salant has played as Shells since summer 2011, beginning with a cassette she gave to notable Detroit-based music avant-gardist Warn Defever featuring “solo psychedelic guitar stuff.” Using delay and loops, she tries to focus on actual guitar playing and not just effects. “Basically, this project is trying to transmit emotion through the guitar, through improvisation and composed pieces,” said Salant. “It’s a wider spectrum of emotions.”

“Loud guitars, smashing drums, screaming vocals, and plenty o f devastating tones,” Gentile surmises. “Lizerrd… (which started as a tribute band to The Jesus Lizard, evolving over the years) is all of that…I remember, as a kid, older guitar dudes ripping on newer rock that was fuzzed-out too much. I still always loved it and felt like those dudes were jealous because they knew too much about the guitar to be able to fuzz-out the right way.”

Nehring (of Bad Indians) said much of his influences for writing songs come from record-collecting and seeking new music. “It’s led me to a lot of amazing private-press albums that have had a huge effect on how I write and listen to music: Electronic Hole, Anonymous, Träd, Dark Cold Sun, The Index (from Grosse Pointe).”

Taylor, meanwhile, said he still approaches writing songs the same as when he started out, seeking the kind of music that he would enjoy listening to and want to see performed live.

FuzzFest is brought to Woodruffs by Jukebox Productions and will feature a light-show each night, provided by Overhead Army. Blue Snaggletooth, meanwhile, is ready to shine under those lights, with its new line-up.

O’Ryan and Kupic are “two amazingly talented players,” says Taylor. “Their excitement and enthusiasm for the music really helped me stay inspired and revitalize the band. Casey is a great song-writing partner. Mike is a seasoned musician who has been playing in bands as long as I have. His tight, straight-ahead drumming style fits the sound perfectly. For me, the new version of BST might be the best so far…”

Blue Snaggletooth will be releasing a new album this summer. Salant, meanwhile, as Shells, put out her first LP, A Cloud, on Fred Thomas’ label Life Like and recently wrapped up her first solo tour of the west coast. She’s working on new recordings this month, but is looking forward to see how her recent recordings with at Dub Narcotic in Olympia, WA last month with Beat Happening’s Calvin Johnson turn out.

As we head into Fuzz Fest, I think we’ll let Gentile have the last word:

“I love crazy, loud, weird music because it makes me feel crazy, noisy, loud and weird. I’m comfortable in that place. I like to be there, actually. But, who knows? Some people want to hear perfect harmony. others find comfort in dissonance.”