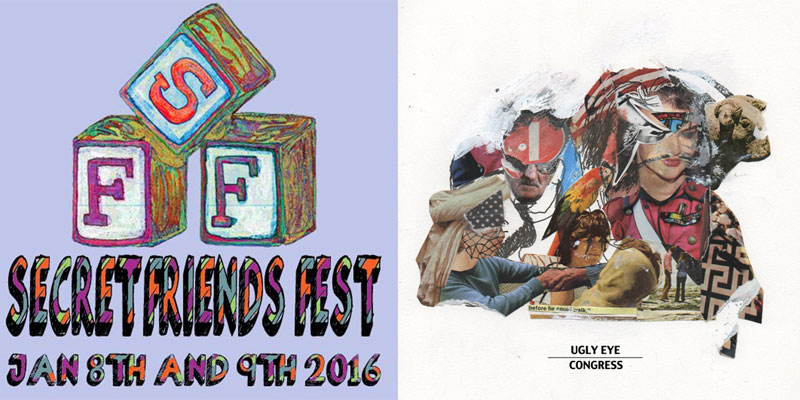 Congress had these songs ready about two years ago, but only recently got into the studio to lay ‘em down. That gave them plenty of time, through rehearsals, rewrites and live recitals at sporadic concerts, to give the tunes space to breathe, nurtured with sweat droplets and galvanized by cranked amps. More than that, the quartet (Jim Cherewick, Eric Gallippo, Ed Golembiewski, and Aaron Quillen) have also had time for their chemistry as bandmates to congeal.

“We wanted to try some things that filled the songs out this time,” said Gallippo. “…more textures and subtle sounds in the mix, like on the early R.E.M. records. Nothing you would miss if it wasn’t there live, but parts that mix things more richly or just sound more exciting, if just for a few measures even: acoustic guitars, different amps, piano, organ, hand claps, extra percussion.”

You’re always more limber 20 minutes into a jog. You can always do your fourth and fifth cartwheel better than those first two tumbles. Congress, accordingly, is tighter, tougher; more air in its lungs and stepping with a surer footing. The grooves are synced snugly and slick, the guitars seem more at home inside their occasionally monstrous growls, the riffs sleek, taut, the vocals feel like a caustic kite cut loose into the gale, applying just the right amount of alien-fuzz-fx to Cherewick’s already otherworldly trilled yowl. Congress is sounds unanimous.

“I think this one had maybe less bravado?” Gallippo says, thinking about it out-loud. “Or, fewer ‘bluesy’ riffs, maybe. A few more twists, turns, and false starts/stops; probably because we got more comfortable together as a band.” That’ll happen after 3+ years. If you aren’t listening yet, welcome to the party.

When they broke out of the gate, I anticipated Congress to be inheriting a bit of Wire’s post-punk and some of Fugazi’s post-hardcore. But the great news contained in Ugly Eye is that they’re not really either of those derivatives and, instead, winningly, becoming their own curious concoction of propulsive percussive rock and funk-flaired surf/punk. These songs, produced with Ian Saylor, are more toe-tappers than head-bangers, more driving, coasting, soaring type jams rather than moshed-bombast. These songs sound like they have wings. They can do barrel rolls. And, to reiterate the chemistry, it sounds like they’re all securely harnessed, so why not try a loop-de-loop. Seek Ugly Eye out. Halfway through the record, we get "Pond Fight," which I'm declaring a new classic of modern American rock.

While I know everyone is either planning for New Year’s Eve or trying to recover from an extended hangover, I hope you’ll take this column’s advice to opportunely update your cultural calendars and consider a trip toward Ferndale on Jan 8 & Jan 9.

Jason Stollsteimer (of PONYSHOW) has curated a two-day festival that sort of shines a beacon out from the Detroit region out toward SE-Canada and across the rustbelt, calling several on-the-cusp bands who have devoted their lives (or at least every free hour from their day jobs) to fostering their groups as their own DIY managers. Secret Friends Fest is an opportunity not only for hard-working up-and-coming (and nearly-breakout) indie bands to come together under an umbrella of mutual support (and inevitable future-touring networking opportunity) but also for local fans to hear a handful of exceptional bands who may not otherwise have gotten around to touring through their town if not for these circumstances. This is the 3rd annual Secret Friends Fest and it seems to only be getting bigger, both in terms of lineup and reception.