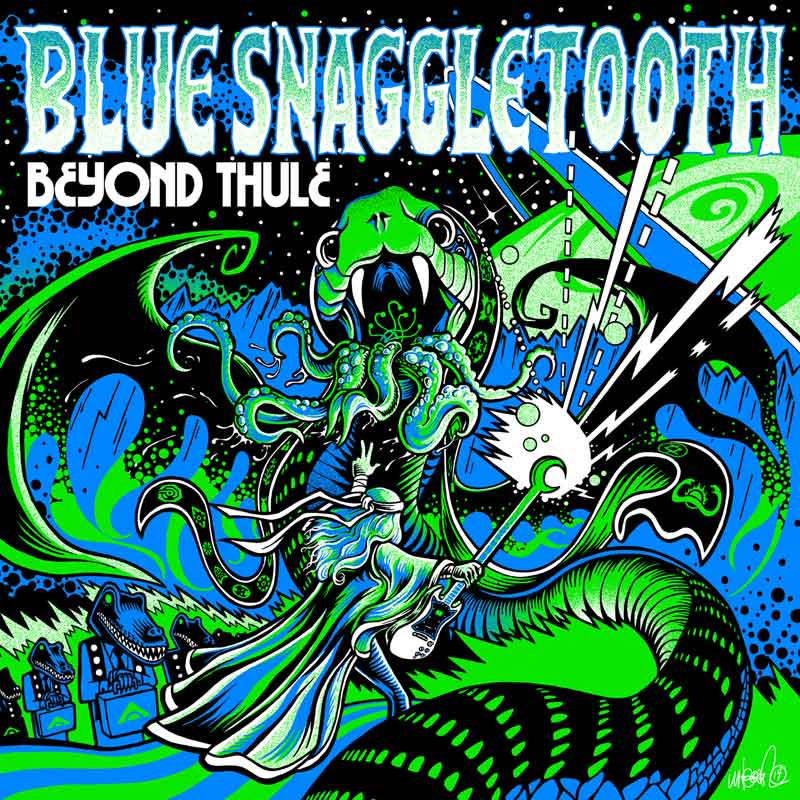 Ann Arbor quartet Blue Snaggletooth certainly sinks its teeth in, with the grimace and grind of metal and the hypersonic barrel-rolls of space-rock. Imagine heavy metal inspired by the mysticism (and gnarly beasts) of Dungeons & Dragons along with the operatic action of Star Wars….

Singer/guitarist Chris Taylor helped forge this outfit back in 2009 (with Jess Willyard, Ian Sugierski and Ian Harris). The group established their reputation for a radical brew of sped-up blues rhythms, hooking riffs and arena-rock recalling balladry, stirred together in a cauldron of metal, of course. The result was their debut album Dimension Thule.

Personal commitments lead to a reordering of the line-up, with Taylor still leading the way along with guitarist Casey O’Ryan, bassist Joe Kupiec and drummer Mike Popovich, who joined together to record the band’s second full length, Beyond Thule.

One new song, “Sleeping Mountain,” seethes with its sinister-toned reverberations over an opening riff that will either make you air-guitar along to it or at least want to grip a claymore sword (or maybe a lightsaber) and step up to slay something. It sounds niche or maybe it sounds too thematic in my description, but if anyone’s ear just tunes in for the melodies they cast, the hard-hooking riffs suturing you into the grooves and the tastefully headbang-able, fist-pumpable beats, than you’ll enjoy it just for the sake of Rock!

Ypsi fans can see Blue Snaggletooth live as part of an ambitious and admirable four-band journey, or “mini-tour” known as the “No One Survives” Tour – joined by Bison Machine, Whaler and Beast In The Field.

November 13th at  The Crossroad's Bar & Grill in Ypsilanti.
(This is officially Blue Snaggletooth’s release show "Beyond Thule"). The tour continues to Saginaw, MI on November 14th, at Whites Bar and wraps up on November 15th in Hamtramck, MI at Small's.
Blue Snaggletooth's new album Beyond Thule is now available for digital download. The vinyl will be available on Nov. 13th and can be pre ordered now at the band's website.