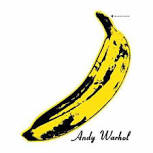 The Immortal Warhol.  Just listing the ways in which Andy Warhol was one of the most influential artists of the 20th Century would consume this column.  Most of his work is easily recognizable and some fetches in the tens of millions at contemporary auctions.  Few people realize that he was something of a music nut.  Visitors to his famous-for-being-infamous “Factory” of experimental art and lifestyle would often encounter two stereos blaring simultaneously, one playing Bach or the Beatles, the other Charles Mingus or Mexican folk tunes.  Warhol’s career as a commercial artist began as a record cover designer shortly after he arrived in New York in 1949, the year after CBS released the world’s first LP.

He continued to design record covers until his death in 1987, as vinyl was nearly dead as a way of distributing music.  The Cranbrook Art Museum – just 45 minutes from downtown Ann Arbor – has the world’s finest and most comprehensive collection of Andy Warhol-designed record covers, thanks to a recent gift from locals Frank Edwards and Ann Williams.  The CAM’s current exhibition, “Warhol On Vinyl:  The Record Covers, 1949-1987+” showcases this amazing collection, including three covers that have never before been seen by the public and one that was just discovered last year.  All together there are more than 100 authenticated record covers, from the esoteric to the immediately recognizable – every cover that Warhol designed over the nearly 40 years of his illustrious and now iconic career.  And not all of his work is easily authenticated; he, himself said, “If someone faked my art, I couldn’t identify it.”

Early Works.  Warhol’s earliest cover illustrations were for classical music and jazz:  Arturo Toscanini conducting “The William Tell Overture,” Thelonius Monk’s album “Monk.”  In 1952 he did the cover for “The Nation’s Nightmare,” the CBS recording of a six-part radio documentary on crime in America.  It’s bracing to see Warhol’s blotted line drawing of a young man shooting up, a needle still in his arm.  Warhol’s first celebrity portrait was of Count Basie for Basie’s eponymous 1955 record.  These early works, images and lettering, are, not surprisingly, in a mid-century modern (some might say “Mad Men”) style.  From the beginning Warhol saw record covers as a way to gain recognition, reputation and popularity.  Almost any record commanded a much wider audience than almost any of his paintings, even after he had skyrocketed to fame with his first Campbell Soup Can series in 1962.

Music Production Years.  In 1966 Warhol became a record producer.  Lou Reed’s Velvet Underground had been a sort of house band for The Factory and in 1967 Warhol released “The Velvet Underground with Nico.”  We of a certain age remember the cover: a white background with a large yellow banana sticker and the words “peel slowly and see” near the tip.  (If you peeled it there was a pink, peeled banana underneath.)  The cover was so striking that it revolutionized record promotion and the Velvets became the leading New York City avant-garde band, even though many radio stations wouldn’t play it because of the song “Heroin.”  And who can forget the 1971 cover of the Rolling Stones’ “Sticky Fingers”?  To go with the suggestive title the cover features a close-up of a jeans-clad male crotch, with a real, working zipper and mock belt buckle that could be unzipped and opened to reveal cotton briefs, stamped in gold rubber:  “Andy Warhol THIS PHOTOGRAPH MAY NOT BE – ETC.”  Later covers for Diana Ross, Aretha Franklin and John Lennon and many others are done in his signature “snap-convert-edit-print” serigraph look. In addition, the exhibition has listening booths that let you play select albums and experience the music behind the cover art – rock, jazz, opera, soul, musicals, experimental, classical.  Also included in the show is a documentary history of mass-produced vinyl records, with video and artworks from the CAM’s extensive Andy Warhol collection, including nine huge prints that were a recent generous gift from the Andy Warhol Foundation for the Visual Arts in Pittsburgh.