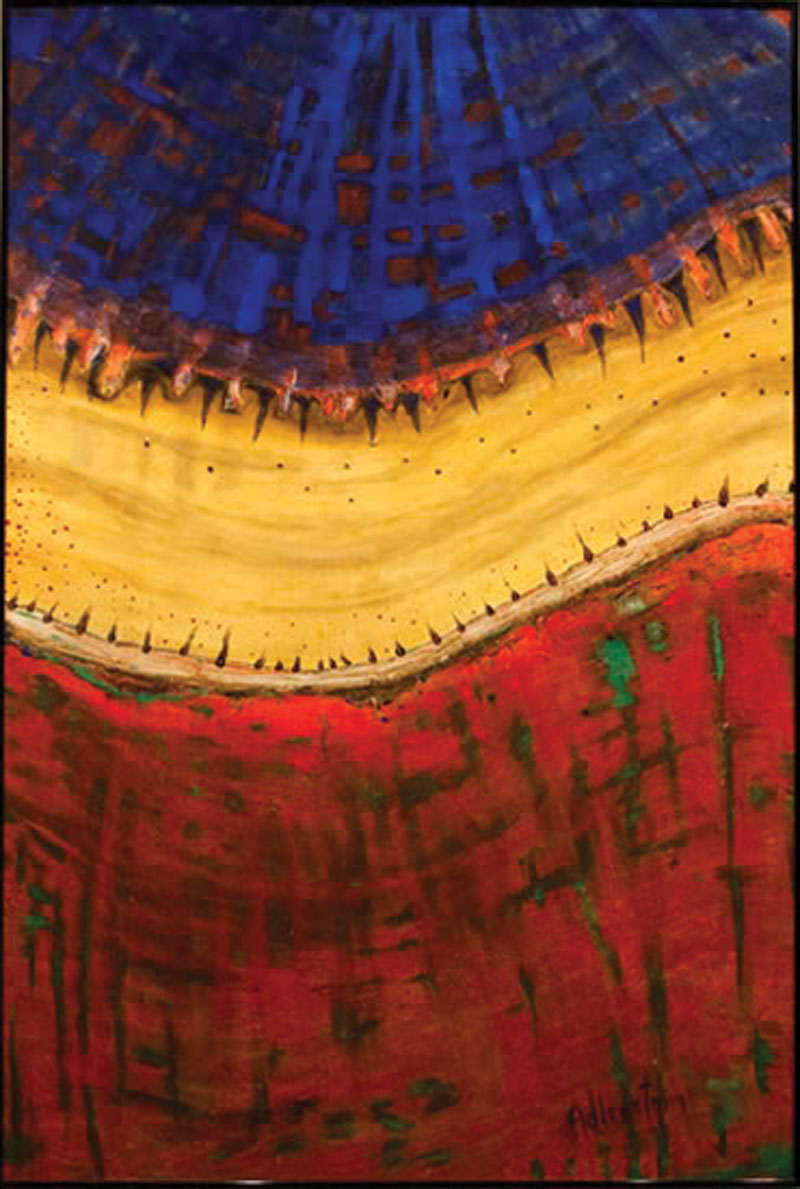 Sara Adlerstein-Gonzalez moved to Ann Arbor in 2001 and since has been one of the amazing, high-energy people who give it such great character. She has two careers, both successful, sometimes blended. On the one hand she is a visual artist, curator and arts promoter. On the other hand, she is a bio-environmental scientist who has conducted significant research on multiple continents. Adlerstein sees art and science as pursuits that naturally, creatively go together “like air and water.”

Adlerstein was born in Chile and grew up in the shadow of the General Pinochet junta which overthrew the elected President Allende in 1973. It’s easy to be enamored with water in Chile, with  2,700 miles of ocean coastline, and it was there, at the University of Concepcion, that she entered into the study of aquatic ecosystems, earning a Master’s degree for her inquiry into phytoplankton. In the process she drew nearly 400 species, which would later greatly influence her paintings. In the 1980s Adlerstein decamped for Seattle and the Pacific Northwest. She was awarded a second Master’s degree and a Ph.D. for her doctoral research at the University of Washington, studying the growth patterns of sea snails by using photography and sketching, documenting 15-day growth periods caused by tides. It was that combination of painstaking record-keeping and creative intuition that characterized the work of Galileo and the early astronomers. At each stage Adlerstein used her scientific insights to inform her creative artistic output.

Adlerstein is a member of WSG Gallery on Main Street, where she displays her work and points up the gallery’s public relations. She teaches art classes at the University of Michigan Penny W. Stamps School of Art and Design, the Residential College and the Program for the Environment. From her position as Research Scientist at the School of Natural Resources and Environment she is a major player in Sea Grant Michigan, dedicated to the protection and sustainable use of the Great Lakes. Think zebra mussels, Asian carp and oil pipeline breaks.

The final exhibition of the academic year at the Enviro Gallery is called “Compromised Beauty,” which runs through June 30. The show highlights the work of Jennifer Steensma Hoag, a conceptual artist who works in photography and video. Hoag earned her Master of Fine Art degree in Imaging Arts from the Rochester Institute of Technology. Her video work was screened at the 5th Cairo Video Festival and at the 4th International Conference on Fine and Performing Art in Athens.  That’s Egypt and Greece, not Illinois and Georgia, in case you were wondering. She is a professor in the Department of Art & Art History at Calvin College, where she has taught for the past twenty years and which gave her a generous sabbatical leave so she could mount this exhibit. “Compromised Beauty” is a collection of gorgeous landscape photographs with unobtrusive but unmistakable figures in Hazmat suits. You don’t notice the figures at first, but when you do you get the point, subtle but powerful. Thank you, Ms. Adlerstein, for mounting this show. I don’t know how you do it, but keep up the amazing work!

Opening reception on Monday, April 6, 4-5pm, Dana Building, 440 Church Street, on the northeast corner of the diag. The Gallery is at same location and
runs through June 30.