Adventures on North Campus: Exploring Art across the River 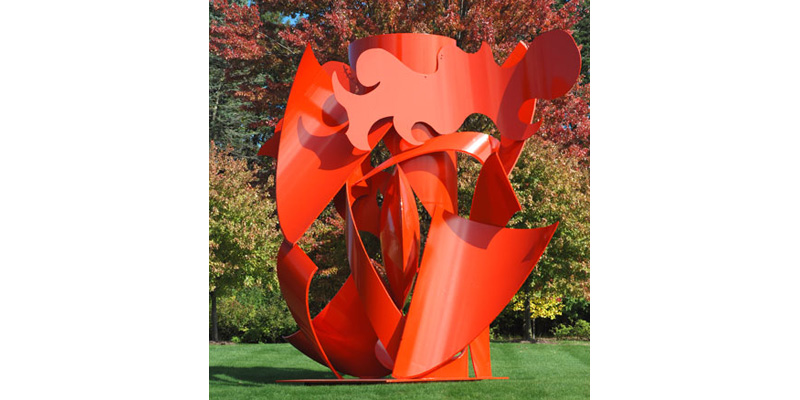 North Campus, far more compact than Central Campus, hosts a year-round outdoor sculpture garden with striking, massive works around every corner.  Many of these sculptures are near the College of Engineering and most are within easy walking distance of any parking space.

Some of my favorites include the mural “The Order of the Spheres” by Roberto Juarez, painted on the dome of the Aerospace Engineering Department’s wind tunnel.  Nearby is “Wave Field,” sculptured lawn by the architect Maya Lin, who designed the Vietnam Memorial in Washington, D.C. I adore “Hobnob,” a 32-foot-long, 17-foot-wide tastefully twisted block of aluminum by the Australian artist and aeronautical engineer Clement Meadmore.

But for me, best in show is “Begob,” a 20-foot tall 12,000-pound “chili pepper red” steel design by Alexander Liberman that evokes Calder and Matisse. And, of course, no one can miss the College of Engineering’s Lurie Tower, the only thing on North Campus that can be seen from the Nichols Arboretum on Central Campus. There are only 23 grand carillons in the world, and the Michigan campus has two of them: The Lurie Tower and Albert Kahn’s Burton Memorial Tower.

The Bentley and the Ford

Less obvious on North Campus are the Bentley Historical Library at 1150 Beal Ave. and, right next door, the Gerald R. Ford Presidential Library. Established in 1935 and named after Alvin M. Bentley, University of Michigan Regent and United States Congressman, the Bentley was endowed by his widow, Arvella. It is really an archive more than a library, with seemingly endless information on both U-M and the State of Michigan. To quote Director Terrence J. McDonald, the university and the state “were born together and grew up together.”

One of the largest and most successful university-based archives in America, the Bentley is your go-to resource if you have any question about the people, organizations, voluntary associations, and official documents of U-M or the state. The library publishes a magazine twice a year and an ongoing series of news articles drawn from its archives.

For personal reasons I was drawn to a recent article based on the donated work of John Richard Behee, Ph.D., a U-M athletic historian. For his 1974 book Hail to the Victors, Behee interviewed 28 African-American U-M athletes in what was then a pioneering study of race and sports.

One of those 28 interviews was of Willis Ward, a bona fide U-M track-and-field and football superstar in the early 1930s. In an infamous blot on U-M athletic history, the Georgia Tech football team came to Ann Arbor in 1934, but refused to play if Ward was on the field. The U-M administration caved and the incensed U-M team was about to rebel. Gerald Ford threatened to quit the team, but Ward, his good friend, told him to go ahead and play, and they did, beating down Georgia Tech in fine form.

I’d known about this long before Behee did his research because my dad played on that team with Willis and Gerry, as he called them. They all stayed friends as Ward went on to become a highly respected judge in Detroit and Ford a highly respected President of the United States of America, as decent in the Oval Office as he was on the U-M team. You can check out President Ford’s library at 1000 Beal, a lovely building with exhibits and special events and lectures.  December 4 from 1-4pm is the annual free Holiday Open House replete with Santa and Mrs. Claus.

The Bentley also oversees one of the most exciting Central Campus venues, the fully operational Detroit Observatory. The oldest observatory in Michigan and the second oldest building on the U-M campus, it’s called the Detroit Observatory because funding came from benefactors in Detroit.  A full restoration was completed in 1998 and it stands today, at the corner of Observatory and Ann Streets, essentially as it was in 1854.

With the Department of Astronomy the Observatory hosts mind-blowing viewing nights, usually 8-9:30 pm Monday and Wednesday, and tours on Sunday.  It’s great for a date or a family outing.