Ypsi Alehouse is a New Classic 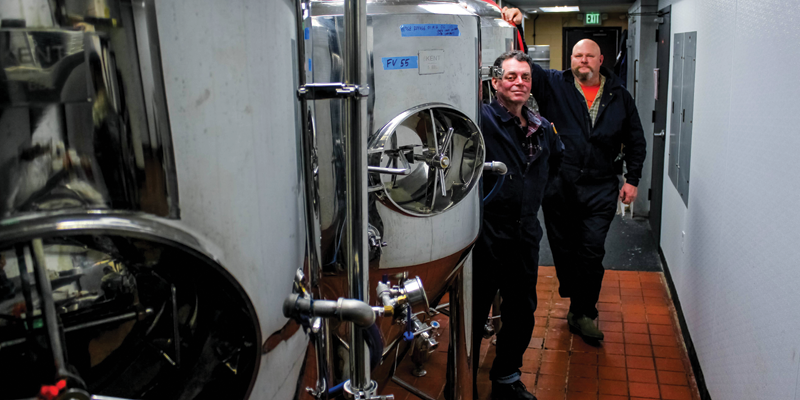 Michigan is a very sporting state. We have the most public access golf courses and pleasure boats per capita of any state in America. It’s also a very thirsty state, with 120 breweries, and growing. Adding to that count is the new Ypsi Alehouse, in scintillating downtown Ypsilanti. I’ve been covering local breweries for almost 20 years now, and there’s not a better beat, not just for the suds, but for the genuine friendships I’ve formed with brewers and pub owners. They are amiable, hospitable, sporting and they are often artists and intellectuals outside the beer world. They have actual personalities (a rarity these days) that comes through in their lagers and ales. Although you can’t get a bad pint of beer in London, Brussels or Cologne, the offerings in those faraway, sophisticated locales don’t hold a candle to Michigan’s craft brews, which are fresher, more varied and handled with more loving care.

Ypsi Alehouse, which opened this January in the historic Centennial Center Building at 124 Pearl St., is the latest, newest craft brewery in Michigan, but in a way it is also the first. That’s because it’s brewer, the redoubtable, inimitable, nonpareil Ted Badgerow, was the first small-batch brewer in the Midwest. His Real Ale Company in Chelsea was written up in the July 25, 1983 issue of Time. The article expounded on the new phenomenon of microbrews and pondered whether they could survive.

I wish I could say that it was all before my time, but I remember buying four packs of Real Ale Stout at the Village Corner and grumbling that it cost more than Guinness. But it was better than Guinness, so I sucked it up and scrimped on textbooks. Now I have no textbooks to scrimp on and Badgerow’s stout and ten other brews at the Ypsi Alehouse cost less than Guinness and are still better. I especially love the Woodruff’s Porter (7.1% alcohol by volume), Mishabooz XXX Stout (7.1%), Isle Royale India Amber Ale (6.8%), and Deja Brew (7.2%). What does that tell you about me? Gulp. I also dig the Beaver Island “Dam It” Ale (4.5%), and Jimmy Jack’s Normal Beer (5%) a tribute to Ypsilanti’s first major college, the Michigan State Normal College. For those of you under a hundred years old, a “normal school” used to mean a teachers college.

Badgerow is also a professional musician who has played at the White House. He put himself through college as a strolling guitar player. The first time I met him was eons ago when he was strumming at a Christmas celebration at Ypsilanti’s Sidetrack Bar and Grill, the coolest place in Depot Town. But it takes more than great beer to make a great alehouse, and the Ypsi Alehouse has it.  To start with it has great, not just good, bar food. It’s worth going even if you don’t drink beer. Chef Mary Potts was the youngest firefighter in the country and took second in the world in her judo weight class. She took an extended tour in Europe, especially Germany, and perfected what to me is brasserie food (the menu calls it “English gastropub with an Italian Osteria Philosophy”) using the best and freshest local produce. I had the best chili (made with brisket) that I’ve ever tasted. My wife and son were blown away by the Duke Burgers on fresh brioche buns with zip sauce, marrow butter and Gorgonzola. That’s all we could eat, but we’re coming back for more.

There is a dart league on Wednesday nights.  And, my favorite, there is a pick-up Celtic – Irish and Scottish – jam every other Sunday. Local musicians bring their own fiddles, banjos, harps, pipes, guitars, penny whistles for an informal acoustic jam session. Ypsi Ale is a group effort all around, including Assistant Brewer, Chris Fraleigh, bartenders Alec Bretzloff and Andrew Nordstrom and Tap Room Manager extraordinaire, Nicole Miller.  Cheers, all!  Keep up the great work.