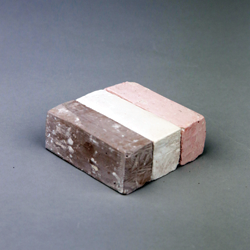 The University of Michigan School of Art and Design is now presenting its annual Master of Fine Arts Thesis Exhibitions. Student shows are always fun, frequently wild, and sometimes a great way to spot an up-and-coming talent who’s still affordable. And it’s a good way to observe long term trends in academic art and design. This semester all the exhibitors are women – a trend? Two shows are running through April 5 at the Slusser Gallery. The Slusser is inside the awesome A&D Building on North Campus. Also running through the 5th is one exhibit at Work.Ann.Arbor on State Street near the State Theater, and two shows are open through June 16 in the Special Exhibitions Gallery of the mind-blowing Kelsey Museum of Archaeology on State Street across from Angell Hall.

At the Slusser is Belongs to Whom, by Siyang Chen. Chen came to UM from Tsinghua University in Peking where she earned a B.A. in industrial design. Some artists seek to elicit delight or amazement. Chen strives to produce “confidence” by deconstructing the ephemeral and evoking what is permanent:  love, friendship, sharing. She believes that confidence can be conveyed in new media art, illustration, product and interaction design – anything!  In this show Chen questions authority via two and three-dimensional designs of authority icons: a jade seal, a monogram logo, money itself. Also at the Slusser is Phenomena, by Jessica Joy Goldberg.  Jessica Joy, as she goes by, is an experimenter par excellence. She combines art and science to create interactive installations, “infect spaces” and prompt “child-like curiosity.” “Phenomena” is culled from hundreds of her paintings from the past nine months, all exploring the interface of the deliberate, the spontaneous and natural phenomena (like evaporation). For her, this exploration calls into question her role as the maker.

At the Kelsey is 100 Ways to Avoid Dying, by Kayla Romberger. Romberger came to Ann Arbor after a Bachelor of Fine Arts degree in printmaking from the University of Montana. She is concerned with the borders between urban spaces and the countryside. Through drawings, prints and object-making she teases and pokes fun at the anxiety, even paranoia that arises at the possibility that pastoral life may become nothing more than a place in the imagination or a vacation destination. “100 Ways” is a site-specific instillation using the archeology museum with its motifs of excavation, documentation and display to juxtapose the stuff of survivalists – tin cans, foodstuffs, matches, bullets, batteries.  In my case, that’s the stuff of a round of golf. Romberger was awarded a Rackham International Research Award and is concurrently enrolled in the interdisciplinary Museum Studies Certificate Program.  Also at the Kelsey is From Afar It Is An Island by Alisha Wessler.  After her B.F.A. from the School of the Art Institute of Chicago Wessler began a dual program here: M.F.A. and Museum Studies.  She is drawn to the collecting and arranging of objects – personal and public – in order to create surprising narratives. Her own paintings and drawings result from the accumulation of infinitesimal detail, scenes frozen in time, cross-sections of singular moments. These moments are not only historical or archeological, but psychic, probing the depths of the unconscious. Using psychoanalytic and other pseudo-scientific imagery she brings about what Freud called a “transference” of emotional memory from patient to doctor, or in this case between artist and viewer. It sounds a bit abstruse, but for me it worked. The Kelsey is an especially effective setting for this exhibition, and as always, always, always it is worth a stop, with or without special exhibits.

Down the street is New Painting by Bernadette Witzack at Work.Ann.Arbor. Witzack has both a B.A. in Fine Arts from Chicago’s Beloit College and an M.A. in Public Service from Marquette. She thinks of herself painting the way a jazz musician improvises. The result is saturated color next to muddled hues, jagged scratches adjacent to graceful contour lines, geometric shapes merging into organic forms.  If you’ve never gone into Work, this is a perfect opportunity.