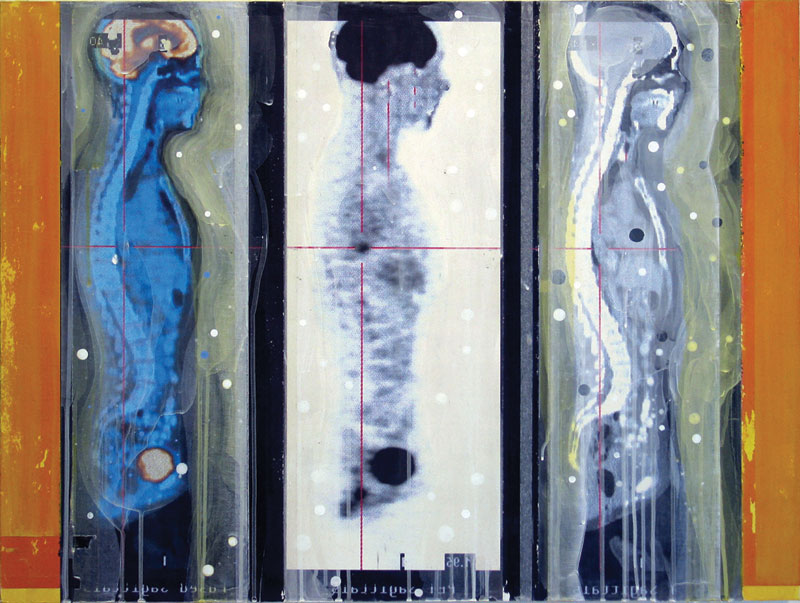 Greeting, returning students (and returning parents). The Penny W. Stamps School of Art & Design is putting on a very exciting exhibition. The Stamps is on North Campus, in case you just moved to town, and its shows are always free and open to the public. It’s a great cheap (er, sophisticated) date, and a joy to behold even if you’re rich and solo. The show, “Mary Hambleton: Waiting for the Miracles,” runs from September 8 through October 3 in the Slusser Gallery within the A&D Building at 2000 Bonisteel Boulevard. If you’re timing your visit to coincide with a game at the Big House, keep in mind that the Gallery is only open 12 – 5pm on Saturdays.

Mary Hambleton was a major East Coast artist. She was born in Baltimore and lived on a farm in Maryland, going back and forth to New York City from a young age.  She died in 2009 at 56 after a seven-year battle with cancer. The show is titled after one of her final paintings. Her first solo show was in 1988 and although by all accounts she was a slow painter she tried to stage a new exhibit every year and a half.  Her career took a major evolutionary turn in 1999, and it is to the last decade of her life that this exhibition is dedicated.  It includes a wide sampling of her work, paintings and other works on paper in a range of sizes.  She lived her adult life in New York City, beloved by collectors and students.  She taught at all the biggies: The New School for Design, Parsons and the Rhode Island School of Design.  And she was recognized by all the biggies: awarded two Jackson Pollock grants, an Adolph Gottlieb Foundation Grant, and a Guggenheim Fellowship.  (I hope you made it to the fabulous Adolph Gottlieb show at the University of Michigan Museum of Art that you read about in this space a year ago.)

After she was diagnosed, Hambleton saw her painting as a means of surviving in the world.  But she had always had a concern about survival, extinction and the fragility of life.  As she deteriorated she introduced color, often bold color, into her work.  Adding an additional layer to her already multi-layered work in oil, alkyd, and polymer, she began applying digital prints with gouache.  These “attachments” included images of extinct and endangered birds, such as the Dodo and the Ivory-Billed Woodpecker, and even some of her own PET scans.  She called herself a “maximal minimalist,” but was known as a very serious, abstract painter.  “Often too serious,” she said.  Her mainstay was juxtaposition, of style, of material, and ultimately of form, space, time and sensation.  She was fascinated by science, especially waves and particles, and her pictures are suffused with striping and dots to create an underlying rhythm.  She loved her own smaller paintings in which she used hundreds of tiny colored dots because they created an “intimate gaze.”  I love all her stuff, large and small, and you will, too, when you see it at the show.

There will be a special Opening Reception at the Gallery from 5-8pm on Tuesday, September 15, featuring a talk by the curator, Tiffany Bell.  Ms. Bell is a private curator and writer and is the editor of the catalog for “Agnes Martin,” a travelling retrospective that will be seen at the Tate Modern in London, the Los Angeles Museum of Art and the Guggenheim in New York.  This is especially apt, as Mary Hambleton often referred to the late artist Agnes Martin as her spiritual mentor and even her “mother.”  Life is short, art long and it’s a small world.

“Mary Hambleton: Waiting for the Miracles,”
Noon–5pm on Saturdays, September 8 through October 3
Slusser Gallery within the A&D Building, 2000 Bonisteel Blvd.