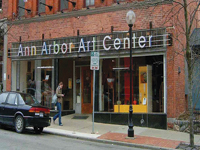 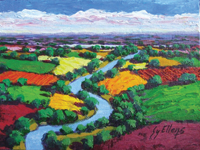 If you’re new in town, or even if you have been here a while, be sure to check out the Ann Arbor Art Center. It’s on Liberty, a block west of Main. It’s not a new operation. It’s in its 102nd year and it’s better and cooler than ever (the second-best era was the Roaring Twenties). The Center has a permanent gallery, a space for special shows, art classes, creativity camp and happenings, like the annual Paint the Town Winefest fundraiser, now in its 29th year. This year’s fest in May was mind-blowing. Great live music, strolling supper and beverages, including wine from Dick Sheer of the Village Corner, the best wine shop between Chicago and New York.And the live and silent auctions. My favorite was the drawing for the use of an apartment on the Ile St. Louis in Paris, with a view of Notre Dame.

The current show, 5-9, celebrates and satirizes the creative work we get done outside of our regular, pedestrian day jobs. This is a group effort put together by James Noellert, local painter and designer who earned his Bachelor of Fine Art degree from the hallowed College for Creative Studies, across the street from the Detroit Institute of Arts. The college was called the Center for Creative Studies from 1975 to 2001, and before that had been known as the Society of Arts and Crafts since 1906 – wow, it’s four years older than our Art Center! Noellert has assembled a gang of interdisciplinary artist friends to tackle the problem of creatively unsatisfying and disgruntling workplaces. The gang includes Detroit-area photographer Daniel Ribar, known for his imagery of the wild and pristine parts of northern Michigan.  The show runs through September 2.

The Center has its own gallery. Not a gift shop but a going concern representing outstanding artists from Ann Arbor and elsewhere in Michigan and around the country. When the set designers of the movie The Five-Year Engagement, which was set and shot here and will be out in blu-ray in August, were looking for authentic local art they were drawn to the Center and ended up buying pieces by 15 different artists including Michelle Bagnasco.  For a while now Ms. Bagnasco has expressed herself in assemblages of found, lost and other materials with added colorings and textures, then fixated with acrylic and silicon gels and covered with UV protective glass. They become what she calls, aptly, “dioramas of the soul.” It reminds me, painfully, of a period in my youth when, in lieu of legitimate presents for people, I would make collages and assemblages taking, for example, open cigar boxes turned on their sides, and gluing things in them in what I hoped was an ironic if not artistic manner. Michelle Bagnasco can rest easily that I am long retired.

Two other of my favorite artists represented by the Center are Sy Ellens and Ruth Langs. Kalamazoo based Mr. Ellens’ work is in private and corporate collections in North America, Europe, Africa and the Far East. He paints entrancing landscapes in what I guess might be called a neo-impressionist version of hyperrealism. His warm, fiery reds, yellows and oranges are juxtaposed with hues of blue, green and purple to produce a calming, soothing sense of peace and harmony. In me, anyway. It speaks to me, and I recommend a look.

Ruth Gilmore Langs studied for more than a decade with the legendary Kwok Wai Lau in Hong Kong and San Francisco. Her vivid, vibrant color field oils, pleasing and well balanced, remind me of the best of the Fauvists – Dufy, 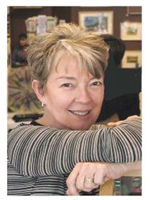 Vlaminck, Derain — saturated in color, but perhaps even less representational. Art is a personal thing, but I happen to dig what she does. Look for it when you visit the Center.

After three decades as president and CEO of the Center, Marsha Chamberlin is retiring. A potter herself, she began her tenure in 1979 when the Center was still called the Association. Eventually she will serve on the Public Art Commission, an unusually talented group. What will she do first when she steps down? “First thing, I’ll go to Paris.” That’s what I’d do. Bon voyage, Marsha. And thanks for the memories.