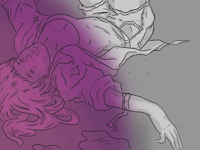 Heroin addicts dying in the street. Ghosts revisiting their kin. Adventure. Walking through dreams. Memories of a father. Natural disasters. These are the themes covered by our six winners, whose evocative, powerful, oftentimes chilling stories and poems were chosen as the winners of this year’s annual Current Magazine Poetry and Fiction Contest. Enjoy.

1st: A BED FOR DAMARIS
by Yma Johnson 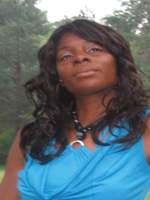 Yma Johnson is a fiction writer/journalist whose work is inspired by her Sierra Leone ancestry and visits to relatives in Africa. The author also spent several years living in San Juan, Puerto Rico which is the setting of her first short story “A Bed for Damaris”.  Yma’s first book, a short story collection titled “Peeling Back the  Night”, is slated for release in December 2012. Excerpts are available on her website at ymaj1968.wix.com/nu-production. She currently resides in Ann Arbor with her wonderful daughter Shechinah and beloved rescue kitty Roseanne.

She’s a thief and a slut!” Damaris flailed her rail-like arms, shifting angrily from side to side.  A hell-worn crew of heroin addicts clustered around her nodding their agreement. They hustled tourists for drug money in Old San Juan. Scams relying on partnership and honesty usually ended in rip-offs, beatings, and street fights.

“She ran off with all the money and nobody knows where she is!”

Damaris’ skin was pock-marked with weeping wounds from dirty needles and the gory ulcers of latter stage AIDS. The alarming image was capped off by a filthy, ill-fitting, black cocktail dress draped over her cardboard-colored skin. She seemed to be rotting in the bright, damp heat. In the middle of her tirade, she caught me staring open-mouthed at the golf-ball-sized lump disfiguring the side of her neck.

I turned away quickly, trying to slip unnoticed into the sanctuary of my apartment, but it was too late.  Damaris slid me a sick, slow-motion smile, grabbed her crotch and thrust obscenely. She smacked her lips and yelled, “¡Mira, mami!”

Fear and embarrassment chased me through the building door, past two locked gates, and into the cool darkness of my home. Trembling, I began re-evaluating the wisdom of moving to this particular corner of Old San Juan. Continue reading… 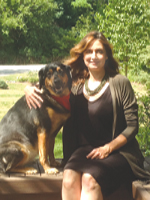 Leslie Eringaard has a Bachelor of General Studies and a Master of Social Work degree from the University of Michigan. She worked as a Research Associate for a newspaper bureau for three years and as a Clinical Social Worker and Therapist for nearly 15 years. She was recently trained in Canine Assisted Therapy, and works as part of a certified therapy dog pair with her dog, Callie.  Leslie lives with her husband, two sons, a cat and a dog in Ann Arbor.

The ghost sighed. It was a soft sigh. No one heard it but the orange tabby cat, who twitched her tail on the front porch of the bungalow. The wind chimes blew a little, although it was a hot still day. And little Mandy came out to play.

The screen door slammed behind Mandy, who was two and a half. She was dressed in a diaper and nothing else. There were red smears around the outside of her lips, like popsicle or juice stains, or maybe Mommy’s lipstick, hastily applied. She was carrying a small clear rubber ball, with some kind of toy in it. “Ball,” she said happily. (It was a favorite word.)

The ghost looked on the little girl with a mixture of fondness and nostalgia. Surprisingly, when you were no longer living, all previous life stages seemed to come clear with equal clarity. She remembered the feelings of being a child and having a child just as easily. And she could read the child’s motivations as if she were reading the pages of a novel.

This little girl was her granddaughter; her son’s child, who she’d never gotten to see as often as she liked after she’d left for Florida, away from Michigan’s harsh winters. But the girl seemed an assignment in a way. The ghost, Madeleine, felt a strong sense of purpose in watching her at present.

Now the toddler laughed at the cat. “Kitt’n,” she said. She laughed again, as if laughing at a private joke. Inside the house, the ghost heard dishes clanging in the sink, as if ‘Mommy’, her son’s estranged wife, were distressed. She heard the plop of a cork open.

“She’s opening another bottle of wine,” thought the ghost, who used to be known as ‘Maddie.’ “That’s why I’m here; to keep an eye on the child.”

The cat, Tigger, jumped off her perch on a sunny spot on the porch rail and ran down a flight of stairs to the front of the walkway. Madeleine could sense Mandy deciding to follow her. Continue reading…

This is Andrew Pardiac’s third story to place in Current Magazine’s Fiction Contest. He is also the writer of the comics “Blood Red Run” and “Guardian Angel”. Currently, he is revising his first novel.

A little boy, no more than ten, crossed the sea in a plastic, yellow raft.  He was all alone in the world except for his toy, a plush rhinoceros his father had won for him at the fair.  It was the last thing they did before the trip.  His father promised he’d see the real thing soon enough, and not at any zoo, either.  His parents had stayed in the air, they hadn’t come down with him.  When the night came, he could see them, sitting on stars, riding Ursa Major like Romans crossing the Alps.  Their images rode with him, across the rocky wake of the open water, through the billowing drafts of the
clear night sky.  Jacob was almost there, across the sea, to Africa.

“We’re almost there,” he would say to the black Rhino, whom he had named Obsidian, with the help of his mother.

He couldn’t see the land yet, but he knew it was there.  Somewhere across the horizon.  It was only a matter of time until he reached the massive continent.  How big could the sea be?

As it turned out, the sea was bigger than his imagination would allow.  The water reached into the air and mixed with the sky.  The clouds above him were brackish pools, mixed pieces of the earth, suspended impermanently until one side defeated the other.  Then the rain would come down like the blood of fallen soldiers.  And Jacob would drink the puddles that formed on the floor of his small craft.  He would wring his clothes out into his mouth before the sun could dry it up.  Nothing more than an ant, Jacob thought.  The beneficiary of nature’s great struggle. Continue reading… 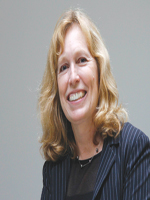 Max Gibson has been an English instructor  at Washtenaw Community College since 1980 and is constantly inspired by her students and colleagues.  A native Ann Arborite, she enjoys spending time with family and friends, playing with her dog, gardening, strolling along Lake Michigan, and hanging clothes on the clothesline.  She hopes those who were in the March 15, 2012 Dexter tornado have recovered; her thoughts are with them.

I dreamed the first line of a poem—

words perched on the ledge of my peripheral vision,

just out of reach. I begged them, “No, no, please

don’t jump,” but they were lifted like leaves and

rose out of reach, never to be caught.

No matter, the journal where I’d hoped to press them

also went missing. And the raspberries and strawberries

I bought for dinner? How could they disappear?

While I searched the upstairs fridge, a voice on the radio

knifed my dread with a deeper panic, If you live

So my little dog, Georgie, and I made our way to the basement.

What if the tornado touched (Is that really the right word?)

down my house? Would it find my journal,

the raspberries and strawberries, the first line of this poem?

And what if it found everything I’ve ever lost or saved?

What if I sat now amongst my Dexter neighbors

under trees and telephone poles of weeping insulation—

dug with my hands beneath the roof under our feet—

unable to find my mother’s wedding ring, or the pictures

of my daughters’ graduations? And what if I

forever lost the words to tell our story? 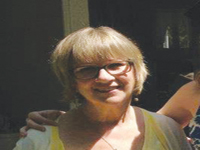 2nd: THE RIVER WHERE MY FATHER DWELLS
by Elizabeth Polk

I live with my husband along the River Raisin in Manchester, Michigan.  After studying creative writing in the 60's at the University of Michigan, I abandoned my pencil to raise two children.  A few years ago, I took creative writing at Washtenaw Community College with Max Gibson as my mentor and I am thrilled my poem was judged second to only hers!  I have had a lifelong love affair with rivers and all things wild.

I cannot go to the river now
without thinking
of my father.

As I stoop to touch the coolness
of the water
I hear the casting of his line
and the patient reeling in
of the spinner
and lure.

I know how the trout linger
in the darkest part
as the fisherman approaches.
My father had the patience
to wait until one strayed
and fast
he would bring it to shore.

My father is too old now
to fish these waters –
his step unsteady
on the moss-slick bottom,
his eyes unable to see
where the deep holes lie,
but he is here
just the same.

I can still feel my father’s presence
in the current
of the river.
I hear his voice in the white water
and see his line still dancing
above the surface
of the taunting rapids.

This river has christened my father –
washed away his sins

3rd: AT SITKA
by Marilyn Peretti 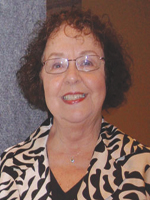 Marilyn Peretti has written a group of poems about the Japanese tsunami and the Haiti earthquake which will appear in a forthcoming book on blurb.com, To Remember, To Hope. She was nominated for the Pushcart Prize in 2010.  She is retired and loves writing, painting and exhibiting. Her son Tom lives in AA.

A girl spots debris washing up
from thousands of miles away,
a floating mass drifting in
from the dark sea.

forcing the predictable sea
into a freakish spout
that falls smack
giant waves into nearest land:

their dishes, their beds, books,
tires, tools and boats,
clutter then rushing to sea,
a tsunami bringing its baggage

YOU HAVE BEEN JUDGED 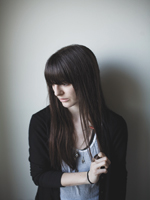 Chelsea Hodson is a 2012 PEN Center USA Emerging Voices Fellow and is currently writing a personal essay collection. Her chapbook, Beach Camp, was published in 2010. She has worked as a reporter, a copy editor, and a Space Grant Intern for NASA’s Phoenix Mars Mission. She lives in Los Angeles and blogs at www.chelseahodson.com. 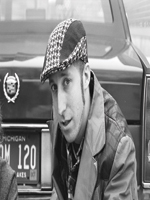 Davy Rothbart is the creator of Found Magazine, a frequent contributor to public radio’s This American Life, and author of the story collection “The Lone Surfer of Montana, Kansas.” He writes regularly for GQ, SLAM Magazine, and The Sun, and his work has also been featured in The New Yorker, The New York Times, and High Times. He lives in Ann Arbor, and was a winner in Current Magazine’s 1st Annual Poetry & Fiction Contest in 1999. 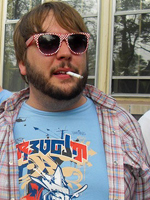 Ryan A. Bunch is a writer from the hill-less gray area between Detroit, MI and Toledo, OH. He is currently the Performing and Literary Arts Coordinator at the Arts Commission of Greater Toledo and Music Editor at Toledo.com, and was the former Arts and Entertainment Editor at Toledo City Paper and Current. Bunch’s poems have been published in print and online nationally and internationally, including publications in Istanbul (not Constantinople) and the U.K. He enjoys tennis, but isn’t very good at it and rarely plays.

Jessica Young holds an MFA in poetry from the University of Michigan, where she won a Zell fellowship and two Hopwood awards.  Her book "Alice's Sister" is forthcoming from WordTech in 2013, and her Pushcart-nominated work has appeared most recently in The Massachusetts Review, Bellingham Review, and Versal. 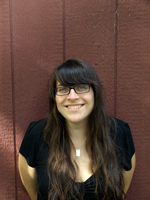