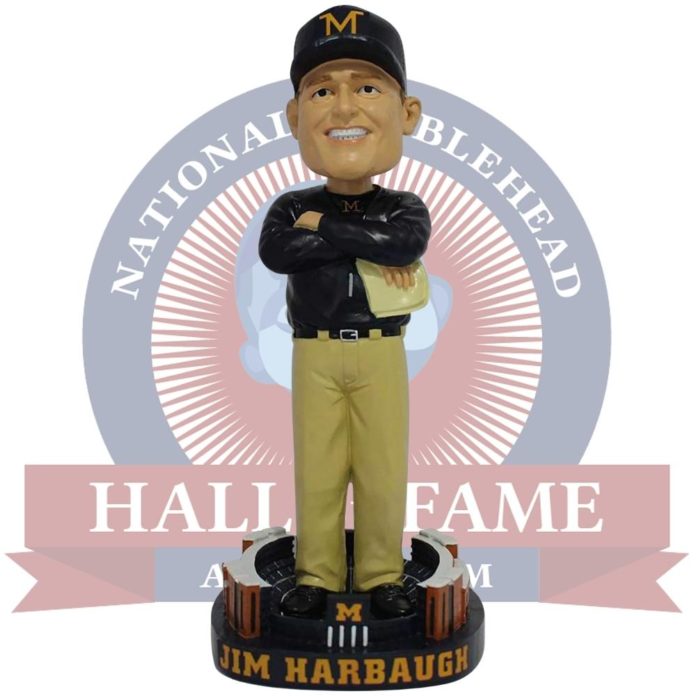 UM’s Jim Harbaugh was recently named The Associated Press College Football Coach of the Year – the first Michigan coach to ever win the award – after leading the Wolverines to their first Big Ten Conference title in 17 years and the school’s first berth in the College Football Playoff.

In his seventh season as coach of his alma mater, Harbaugh and the Wolverines rebounded after going 2-4 in the Big Ten’s abbreviated schedule in 2020. This year, (2021), Michigan snapped an eight-game losing streak to rival Ohio State and routed Iowa in the Big Ten title game.

In January 2021, Harbaugh signed a contract extension to remain as the coach through at least the 2025 season and he was named the AP College Football Coach of the Year in December after leading the Wolverines to their first Big Ten title in 17 years.

This morning, the National Bobblehead Hall of Fame and Museum made an officially licensed, limited-edition bobblehead of University of Michigan football coach Jim Harbaugh available for sale ($40 + $8 for shipping).

The release comes ahead of Michigan’s College Football Playoff Semifinal Game against Georgia on Friday.

The bobblehead features a smiling Harbaugh wearing a Michigan long-sleeved shirt and baseball cap along with khaki pants. He is standing with his arms crossed in the middle of a replica of Michigan Stadium – better known as “The Big House.”

The National Bobblehead Hall of Fame and Museum, (located at 170 S. 1st. St. in Milwaukee, Wisconsin), opened to the public on February 1st, 2019. The HOF and Museum also produces high quality, customized bobbleheads for retail sale as well as organizations, individuals, and teams across the country. The bobbleheads were produced by FOCO.