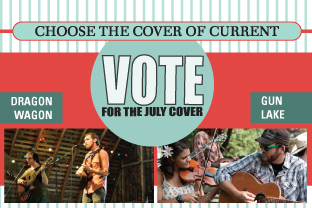 We started with 12, now we're down to the final two. Current caught up with the finalists — Gun Lake and Dragon Wagon — of the Cover of Current Competition for a brief conversation to help our readers cast their final vote. The winner will be our July cover feature. Check out the Q&A, watch the videos, visit the websites and cast your vote at the bottom of this page. We've had a lot of fun through this whole process; a big thanks to the bands, voters and readers.

Current to Gun Lake: Some of the songs on the first album, Balfour, were written two years before the album dropped. Did the songs change at all during that time, or are you someone who sticks to that initial, raw burst of creativity? 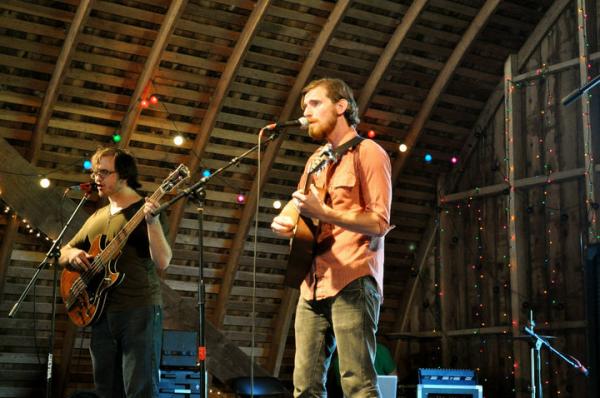 They definitely change. The songs on Balfour were mostly written over the last six months of 2009, and during that time, there was not yet a band called "Gun Lake," so I was giving myself feedback about things I'd write. If I had feedback, it wasn't finished. I sometimes had a few versions of the same song. One of those is actually recorded, and these days I find I like it better than the album version. I also had several songs or bits of songs that didn't make it on Balfour. Trials was almost one of those because I had been playing it forever, trying different things, but it was never quite right. Fortunately, I played it for Jim in the studio, and he had me record a live take without a click, and that became the core of the song.

Current to Dragon Wagon: You guys can really get a crowd moving. Even the melancholy songs have so much life infused in them. Is that something that comes naturally or have you guys worked to kind of define that sound? 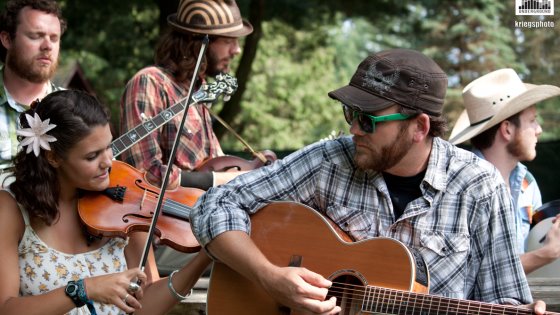 One of the best compliments we can get is "You guys really look like you are having a blast up there". The reality is that we really are.  When Dragon Wagon was formed, we were an acoustic project with no drums. When we played festivals, we would have a drummer sit in with us and then we got to the point two years ago where we felt the the energy with the drums and percussive bass really added not only to the crowd's energy, but also to our own. Fritz, our drummer, graduated from University of Michigan with a percussion degree. He had never played the full drum set with a band instead focused on other percussion instruments like the Marimba and Bodhran. We were looking for the right fit, not just another bluegrass shuffle player and Fritz was perfect. Our sound has really developed over the past couple of years to who we are today. We find that if we are dancing around like goofballs on stage, it's an invitation to the crowd to join along. We want people to have a ton of fun when they come see us. We definitely don't take ourselves too seriously and our rhythm section lends itself to be dance friendly.

Current to Gun Lake: Has your song writing process changed at all since Gun Lake formed in 2009?

It probably has. I hope I'm always getting better because I think that's sort of the point. I know the new songs are good, but I'm constantly tweaking stuff.

Troy and I started the band back in 2008. We had known each other since college and have each played in many other bands in a variety of genres previously. We actually had the name before we played our first note. Through a couple years of playing we had a number of musicians play with the group until it was just down to me and Troy again. We sat down and decided whether or not we were going to continue the project or move on to something else. We decided to push forward because we believed in the music and asked another friend from College to join, Rich Delcamp on Banjo. Diana and Fritz joined shortly there after and finally Mike joined on the Uke-bass to make Dragon Wagon as we are today.

Current to Gun Lake: You're from Northern Michigan, but settled in Ann Arbor. What brought you here?

Current to Dragon Wagon: What do you guys have coming up in terms of shows or releases?

We have a really exciting summer planned. Most of May and June we will be on the road traveling from the East Coast all around the Great Lakes and beyond. Also, we have been fortunate enough to have booked many festivals through to the fall. Our facebook and website pages are updated often to let everyone know where we will be. We are close to finished with our Album, which will be released by July 1st. July 13th, we will be having our Ann Arbor CD release at the Blind Pig and then July 27th at Woodruffs in Ypsilanti. We just feel so grateful to be able to play music, travel and to have found each other.  We have become really great friends and really feel that the sky is the limit for Dragon Wagon. Right now we are just really enjoying the ride.

Current to Gun Lake: Is there more material written, recorded or anything in the process?