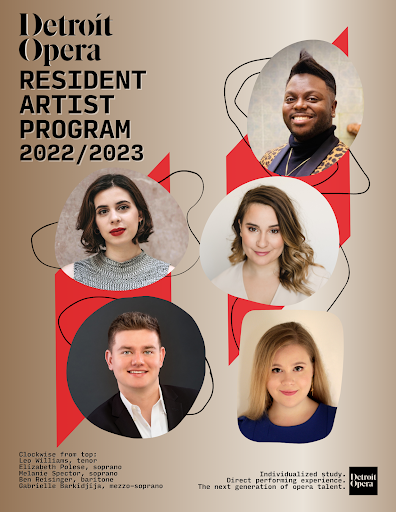 “I am delighted that Detroit Opera will once again sponsor a Resident Artist Program for young singers,” says Detroit Opera President & CEO Wayne S. Brown. “Under the leadership of Christine Goerke and Nathalie Doucet, participants can expect an extraordinary experience with our organization and the Detroit community.”

“One of the most unfortunate losses for our company during the pandemic was putting our studio artist program on hold. So it’s wonderful to see the program not simply revived but also given a fresh perspective,” says Artistic Director Yuval Sharon. “I look forward to seeing how Christine Goerke and Nathalie Doucet’s leadership of this renewed Resident Artist program will create a unique opportunity for these fantastic singers.”

The five Resident Artists will commit to an intensive program while living in Detroit from September 2022 through June 2023, training directly with Goerke, Doucet, and other members of the Detroit Opera community in specially crafted and individualized curricula of voice, movement, and language.

As Associate Artistic Director of Detroit Opera, celebrated soprano Christine Goerke is eager to reshape the Resident Artist Program to keep pace with the spirit of innovation, outreach, and community-building that has characterized Detroit Opera’s programming and administration since the arrival of Gary L. Wasserman Artistic Director Yuval Sharon. To assist her in this new venture,  she appointed internationally renowned opera coach and pianist Nathalie Doucet as Director of the Detroit Opera Resident Artist Program. Goerke and Doucet strive to create a program that will align with the country’s top training programs. Along with visiting artists coming to share their knowledge and expertise, regular access to Goerke and Doucet with their combined international experience in performing and training emerging artists will provide invaluable insight into Detroit Opera Resident Artists’ emergence as future stars of tomorrow.

“Having had the good fortune to have had a career spanning the better part of three decades and counting, I know without a doubt that I would not be where I am today without having benefited from various training programs,” says Detroit Opera Associate Artistic Director Christine Goerke. “Having a space to grow, explore, learn, test boundaries, and even fail in a safe place allows us to craft the artist that we will become. I am so proud to oversee the Detroit Opera Resident Artist Program, and I look forward to supporting the creation of the next generation’s stars.”

“Providing a safe space for the next generation of singers to thrive and get to the next level of their artistry is very important to us at Detroit Opera,” says Detroit Opera Head of Music Nathalie Doucet. “Our goal is to give the five extremely talented selected singers a place to collect the tools they need to succeed in this highly competitive industry. It is thrilling to be part of their journey toward achieving their dreams. I have been training emerging singers for the better part of almost thirty years. It is one of my greatest passions and I am looking forward to working with the talented singers we have assembled for the 2022–2023 season!”

Nathalie Doucet was named Head of Music in 2021, a new position in which she works closely with Detroit Opera Associate Artistic Director Christine Goerke, assistant Music Director and Choir Master Suzanne Acton, and Detroit Opera’s future Music Director. Doucet comes with more than 25 years of experience as a vocal coach, collaborative pianist, and lyric diction coach with significant experience in opera, art song, and oratorio. She has extensive experience in training young singers at both the university and studio program level and has previously aided in both the development and management of professional young artist programs. She was most recently a coach, collaborative pianist, and professor at the Music Conservatorium van Amsterdam, and has worked closely with the Dutch National Opera Academy, the Opera Studio Nederland, the Dutch Radio Philharmonic Orchestra and the Royal Concertgebouw Orchestra. She has also been a regular coach with Knoxville Opera, Orlando Opera, and Des Moines Metro Opera, where she worked with emerging young professional opera singers and served as coach and répétiteur for many productions.

Praised for her “beaming soprano” by Operawire, Melanie Spector is a coloratura soprano on the rise who was born and raised in New York City. Most recently, she performed as Königin der Nacht in Mozart’s Die Zauberflöte with both Eugene Opera and the Stuttgart Philharmonic, making her international debut. Other recent performances have included the Metropolitan Opera Guild’s In-School Performance Tour and a concert of Italian opera repertoire with the Queens Symphony Orchestra. Melanie has been a District Winner/Region Finalist in Metropolitan Opera Laffont Competition (2021, 2022), and has received awards from the Gerda Lissner Foundation, the National Society of Arts and Letters, and the SAS Performing Arts Company. This summer, she will be a Festival Artist at the Great Lakes Chamber Music Festival, and she will sing Woglinde in Wagner’s Das Rheingold at the Miami Music Festival. In addition to singing, Melanie is a regular panelist on the Toll Brothers Metropolitan Opera Quiz during Saturday matinee broadcasts.

Canadian soprano Elizabeth Polese has been praised as “powerful and engaging” by The Globe and Mail, with “power to spare” by Opera Canada. She has recently been a young artist with Atelier Lyrique (Opéra de Montréal), Tanglewood Music Center, Highlands Opera Studio, and the winner of the Sullivan Foundation Gail Robinson Award for Soprano and Hynatyshyn Developing Artist Award for Classical Voice. This season, she has appeared as Papagena in Barrie Kosky’s Die Zauberflöte (Opéra de Montréal). She goes on to sing Queen Isabel in the North American premiere of George Benjamin’s Lessons in Love and Violence (Tanglewood), and in a chamber music recital with Mendelssohn Orchestra Academy at Gewandhaus Orchester in Leipzig, Germany. During the 2022-2023 season, she will also appear in concert with Orchestre Classique de Montréal and as Nuria in Ainadamar with Opéra de Montréal. Originally from Toronto, Elizabeth holds degrees from the University of Toronto and calls Montréal her home.

Mezzo-soprano Gabrielle Barkidjija is originally from the Chicago area. Notable performances in her career thus far include Dorabella (Cosi fan tutte), Ada Lovelace (The Infinite Energy of Ada Lovelace), Fanny Price (Mansfield Park), Captain (Dog Days), Béatrice (Béatrice et Bénédict), Zerlina (Don Giovanni), Mère Marie (Dialogues of the Carmelites), and Estelle (Later the Same Evening). She has been a young artist with the Merola Opera Program, Central City Opera, the Aspen Music Festival, and the Boston University Opera Institute. She completed her bachelor’s and Master’s of Music (full-scholarship) at Northwestern University. She earned Encouragement awards in the Metropolitan Opera National Competitions in Boston and Chicago and second place in the Orpheus Vocal Competition and the Classical Singer Competition. In 2021, she received a nomination for a GRAMMY with The Crossing Choir. The Boston Musical Intelligencer recently wrote that Gabrielle was “riveting on stage and sang with damnable commitment and satisfying vocal chops” as Brittomara in the Boston premiere of Jake Heggie’s If I were you.

Leo Williams is a proud alumnus of Indiana University and recipient of The Georgina Joshi International Grant, The Jacobs Premier, & The Schmidt Foundation Scholarships. Stage credits at Indiana University include La fille du Régiment, Peter Grimes, The Crucible, The Consul, Les Pêcheurs de Perles, Samson et Dalilah, It’s a Wonderful Life, and Lucia di Lammermoor. He has also had an active performing career overseas and appeared in La bohème, L’elisir d’amore, Lucia di Lammermoor, and Don Giovanni. Leo was a 2020 Opera Maya Studio artist, Berlin Opera Academy Principal Artist, and an Opernfest Prague Fellow. Recent debuts include: Cavaradossi/ Spoletta (Naples, Fl), Macduff (Australia), Don Ottavio, and Tamino (Germany). He is a past participant in The UNISA International Voice Competition (South Africa). After winning a coveted spot in the Nationwide Detroit Opera Resident Artist Program final auditions, he goes on to join the program for the 2022–2023 season. An avid lover of world travel and speaker of 5 languages with years of classical dance training, Leo served as Assistant Professor of the Indiana University Soul Revue.

Ben Reisinger is a baritone from Rochester, New York, living in Lansing, Michigan. Reisinger attended Michigan State University, where he studied with Professor Mark Rucker. He also works with Laurie Feldman, stage director, teacher, and coach.  Reisinger is a two-time District of Michigan winner in the Metropolitan National Council Auditions and a two-time Encouragement Award winner and recipient of the Dr. David Dichiera award both in 2020 and 2021 in the Eastern Regional event. In 2017 he was the American Prize Award winner in Vocal Performance in the Collegiate Opera/Operetta division. He has performed many roles while studying at Michigan State University; notably, Ricky Ian Gordon’s Grapes of Wrath, coached by Ricky Ian Gordon. He was part of the Martina Arroyo Foundation’s Prelude to Performance Program in 2017. He has been a frequent performer in masterclasses with many great artists, including Renee Fleming, Jan Opalach, and Julia Bullock. Along with being passionate about opera, Ben was one of the Northeast Vocal Finalists for the Michael Feinstein Great American Songbook Competition in NYC.