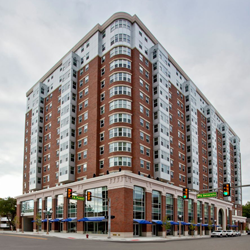 Some major moves have happened this month — in several different senses of the word. A craft franchise is moving into a student housing complex, a local real estate agency is merging into one of the nation's largest and a local bar has filed a lawsuit to fight a state rule that doesn't allow endorsement signs at establishments with a liquor license.

A craft beer bar franchise is making it even easier for students to grab a pint of the globe's finest brews. World of Beer, which previously had no locations in Michigan, is opening on the first floor of the Landmark student high-rise, which houses about 600 residents. The franchise boasts over 500 beers, numerous TVs for sports and live music at each of its over 30 locations across the nation.

A top Washtenaw County real estate company made a huge move, merging with one of the nation's leading forces in the real estate game. Edward Surovell Realtors, which has been owned and managed by Ed Surovell for 30 years, has announced it will be merging into Howard Hanna Real Estate Service based out of Pittsburgh, which is the U.S.'s fourth largest real estate company. Ed Surovell will be on the company's board.

Aut Bar is challenging a 1954 state rule that bans establishments with liquor licenses from being able to post campaign signs for politicians. They have filed a lawsuit in Detroit federal court under the grounds that the rule violates the 1st amendment. Currently, Michigan bars are allowed to post signage regarding issues, but not signs endorsing candidates.