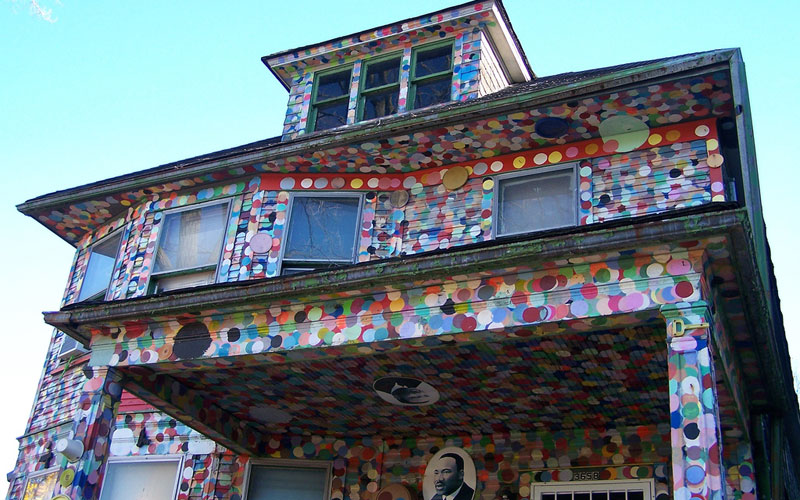 I wrote about the Julian Schnabel show at the University of Michigan Museum of Art a couple of months ago, and I hate to showcase the same venue too often, but the UMMA is still coming on strong (shame on you if you missed Julian Schnabel,  it was mind-blowing, and his two-story pieces in the A. Alfred Taubman Gallery in the “new” Maxine and Stuart Frankel and the Frankel Family Wing were a rare treat for all us here in the fly-over territories.  Come to think of it, when I did the R.I.P. story on the immortal Al Taubman earlier this year, and listed major buildings and schools he gave to UM I forgot to include his contributions to the UMMA).  Ptoo!  How I wander.

On now through January 3rd is The Art of Tyree Guyton:  A Thirty-Year Journey.  Guyton is world famous for his Heidelberg Project and this is the 30th anniversary of his oeuvre.  My devoted readers and fans know this because I reviewed the movie Come Unto Me:  The Faces of Tyree Guyton when it came out in 1999.  Guyton took a run-down abandoned street, Heidelberg Street in Detroit, where he grew up, and turned it into a gargantuan work of assemblage art.  To be honest, I wasn’t even aware of it until twenty-five years ago when a friend from Grosse Pointe (now a leading Hollywood set designer) absconded with a doubting me and “forced” me to see it.  It was a shocking, stunning, mind-boggling, beautiful freak-out.  And it still is.  It is one of those things that has to be seen to be believed, not only a work of art but a force of nature.  It reminded me of when I first beheld the brand new Centre Georges Pompidou in Paris, France.   What the…?…Wow! 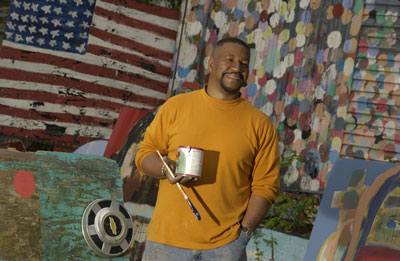 The bottom line is that Guyton took a row of abandoned houses and used bright house paints and discarded objects (toys, clothes, televisions, records, furniture, you name it) and put them all together to genuinely artistic, monumental effect.  His grandfather, Sam Mackey, had been a house painter, and is credited as Tyree’s muse, steering him away from drugs, guns, pimping and community organizing.  Guyton had grown up in poverty on Heidelberg, one of nine children.  He served in the United States Army and worked a number of jobs that were frustrating to the artist within. Then the artist within took the plunge. Abandoned houses became canvases.  Junk on the street became objets d’art.  You have to Google-Map it, drive down the two blocks on Heidelberg Street and just smile and maybe gasp.  You’ll see why UMMA Curator of Modern Art, MaryAnn Wilkinson, calls it “one of the largest, best-known, and longest-running site-specific art installations in the country.”

The Heidelberg Project, like any great work of art, has had its controversies (many Parisians had wanted to tear down the Eiffel Tower, and for that matter the Pompidou).  Neighbors on Heidelberg objected.  The City of Detroit bulldozed several of the houses on two occasions.  Very recently there has been a series of arson attacks that have destroyed more home/art/installations.  Excellent video, “Heidelberg Television,” at the UMMA highlights the carnage, before and after.  Guyton studied art at Wayne State University and the College for Creative Studies in Detroit.  He returned from a fellowship in Switzerland and moved back into his studio to create smaller scale, but recognizable pieces, painted on car hoods, guitars, vacuum cleaners, hats, doors, mattress springs and other found objects.  And that is what the UMMA show is — new work and a video retrospective of Guyton’s timeless genius.  By the way, UMMA has a fine permanent collection of the artist’s work.  If you go downstairs you’ll see a great painting on your way into the Men’s or  Women’s Room.  It’s worth the trip.