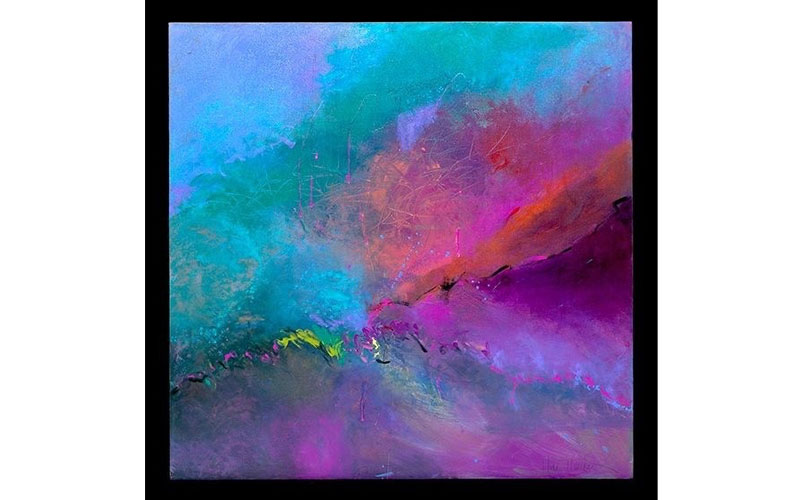 I love Nina Howard.  To know her is to love her.  She touches so many people in so many ways, and now is your chance to experience her latest creation. Thursday, November 5th is the opening of Back2Roots Bistro, the new vegan gourmet restaurant on Main Street.  Nina is a nationally renowned interior designer and artist, and a long-time bio-dynamic organic food farmer, so it made perfect sense for the owners, Pradeep Chowdry and Swaroop Bhojhani, to ask her to design the restaurant’s interior, including 20 of her paintings on the walls.  When she paints, she puts the oils in front of her, and the canvas, and lets the Spirit flow through her and take over the process.  And it works.

From NYC to A2

Howard has been a fixture in Ann Arbor for more than 20 years, but the way she got here is a marvel in itself.  She went to New York in the early 1970s and earned her design certificate from the New York School of Interior Design.  Then it was on to the State University of New York’s prestigious Fashion Institute of Technology, where she graduated Magna Cum Laude and first in her class.  She was snapped up by Warner Communications at Rockefeller Center and began designing interiors, some small, some hundreds of thousands of square feet.  She continued designing retail shops, salons, spas, and residences, including Kenneth Cole’s first shoe store and his private residence, and Merrill Lynch’s headquarters.  Remember, this is not local yokelville we’re talking about, this is New York City.

Howard had always been into painting as well as designing, and got her first break in New York when a client couldn’t decide on a painting for a certain wall and Nina offered her own work.  “My first commission!” she beams to this day.  And to this day, 34 years later, she has created hundreds of paintings from postcard size to ten feet long.  (She was voted “Best Artist” in Current Magazine’s Readers’ Choice Awards in 2010.)  She had always had a deeply spiritual side as well, and found a spiritual home in Waynesville, North Carolina, just outside of Asheville in the foothills of the Great Smoky Mountain National Park.  (I’ve been there a couple of times, myself, and I can understand her sentiments exactly, although for me it might not just be the staggering beauty, but that Asheville has the most breweries per capita in America).  In Waynesville Howard continued to paint and design.  She built a fifty-foot geodesic “biodome” ecosystem.  And she opened a spa.  And as it turned out she was as good at spas as she was at art and design.

Nina is also a romantic.  In 1994 she moved to Ann Arbor “because of a love interest.”  She worked as a massage therapist and soon had enough clients to open her own spa, Bellanina, now at 409 North 4th Avenue, across from the People’s Food Co-op.  Within a few years she grew to 33 employees serving thousands of clients annually (in 2007 Bellanina Day Spa was named National Day Spa of the Year).  She developed a skin care, bath and body brand.  She bought a major spa training institute in California, that trains massage therapists, estheticians and healing arts professionals in unique facial massage techniques.  And she bought up five prime real estate locations in Ann Arbor and opened Bellanina Guest Houses, luxury short-term living or vacation rental properties for visitors to town.  She designed the interiors, including her own art.  Brilliant.  Everything Nina does is brilliant.  Check her out.