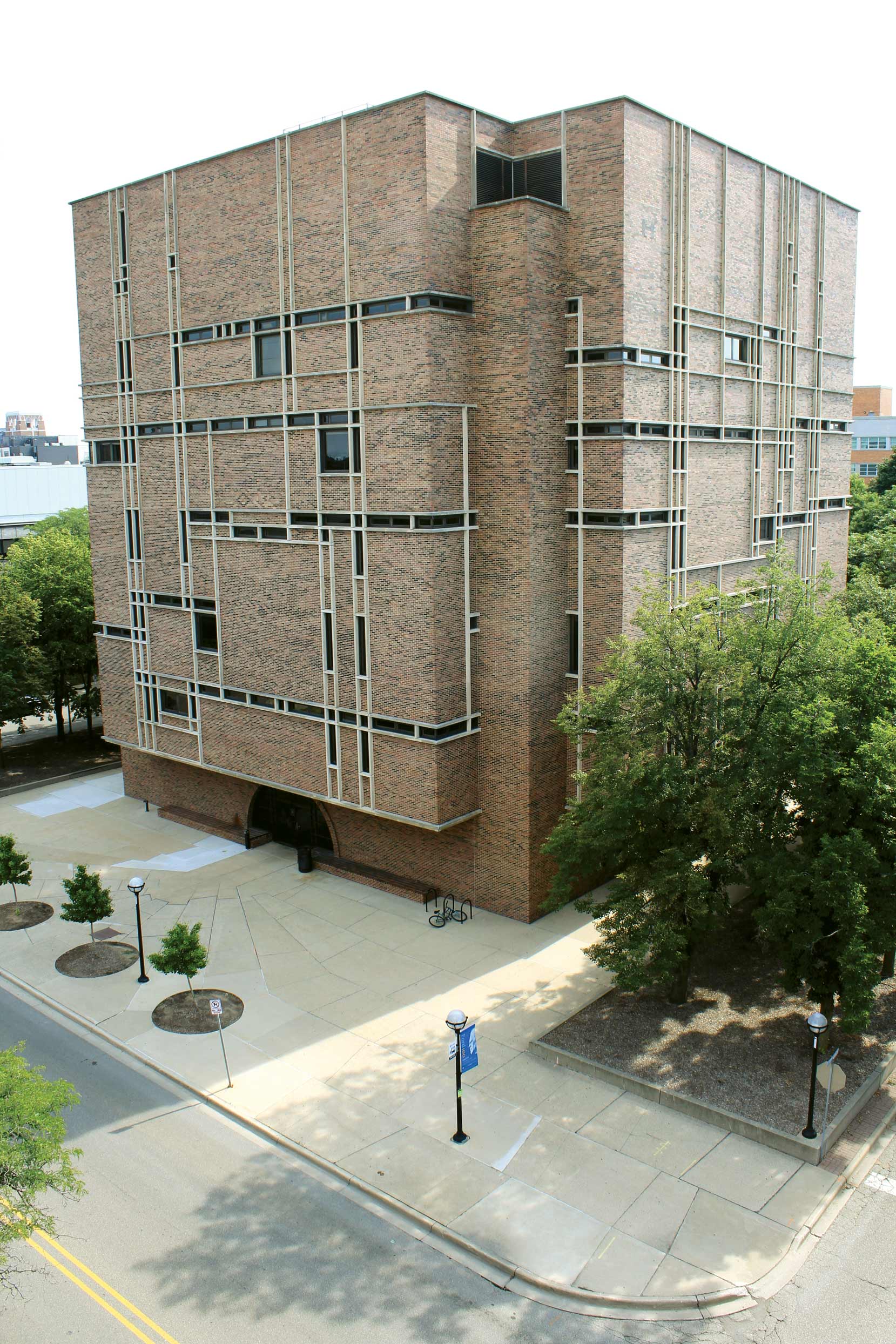 I knew the name Alden B. Dow because his foundation sponsored so many public radio and television programs. I assumed he was related to Midland, Michigan’s Dow Chemical Corporation, and that he was a honcho or a distant nepotistic legacy. It wasn’t until I saw giant photos of his work featured in a major exhibition at the Cranbrook Art Museum last year that I realized he was no dilettante-philanthropist but a bona fide world-class architect. Subsequently I went on a tour of the Alden B. Dow Home and Studio in Midland, Michigan, and it was mind-blowing. It is not only a National Historic Landmark, it won the Diplome de Grand Prix as the best residential design in the world at the 1937 Paris International Exposition. And Dow’s architectural legacy in Ann Arbor is second only to that of Albert Kahn, designer of Hill Auditorium, Angel Hall, and over a dozen other U of M buildings.

Indeed the son of Henry Dow, founder of the world renowned chemical company, Alden was born in 1904. As a teenager his family took an extended voyage to Japan where he marveled at the Japanese gardens and architecture. He studied engineering at the University of Michigan, then transferred to Columbia’s School of Architecture. In 1933 Alden studied with Frank Lloyd Wright at Taliesin in Spring Green, Wisconsin. You can see the influence in Dow’s work, and you can see why Wright called Alden his “spiritual son.” Over 36 years, Dow built 18 buildings in Ann Arbor, and the only structure not still in use is a former Leonard gas station on West Stadium. His most inspired work dates from the mid-1950s to mid-1960s and four of his best are within steps of each other on Central Campus. 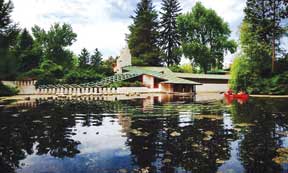 The Fleming Administration Building (503 Thompson) was named after University of Michigan President Robben Fleming. It is an upright rectilinear structure of light, earthy brick with narrow windows variously arranged so as to remind commentators of a Mondrian painting.  Fleming was the miraculously successful President of U of M from 1968 to 1978 – Michigan’s most volatile years, with riots, sit-ins, lock-ins and, in 1970, the 12-day Black Action Movement strike demanding that 10% of Michigan enrollment be black students. My, how things change. I remember Fleming from the mid-70s, supremely dignified and uniquely able to mollify, placate and see the tumult sub specie aeternitatis. Now that’s dignified! Just four doors down at 426 Thompson is the Institute for Social Research, the leading survey research body in America. It is a dazzling configuration of black and white rectilinear form, imposing, impressive, slightly surreal. Dow designed the interior so that the researchers (all men) had private offices and the support staff (all women) were in a central area without private space. A few short blocks west, at 343 South Fifth Avenue, is the Ann Arbor District Library. It evinces Dow’s love of vivid colors and angular arrangements. And it is just as functional and inviting and modern as it was when it opened in 1956. Now head straight north for another few short blocks until you come to the Larcom Municipal Building, 100 North Fifth Avenue, aka City Hall, Court and Police Station. It is an inverted-step pyramid, a cubist version of Wright’s Guggenheim Museum in New York. The new East Wing obscures some of Dow’s original edifice, but I guess that’s “progress.”

Dow also designed the gorgeous Bell Pool (1952), the “Women’s Pool” as we called it, which went coed in 1976. And he created the buildings of the Matthaei Botanical Gardens, one of the finest university gardens in the country. Dow was the recipient of the first Frank Lloyd Wright Creativity Award in 1982, and the next year, the year he died, he was named the State of Michigan’s Architect Laureate. There are those who wrongly believe that Modernism, especially in architecture, is bleak and sterile. But like Duke Ellington said about music, there is only good and bad. Alden Dow was good. He helped invent Modernism which, to people born after the War, may appear pedestrian. Like drunkenness at a fraternity party, it goes unnoticed. But keep your eyes open, and realize that there was a time when it never existed