In your cups at the clay 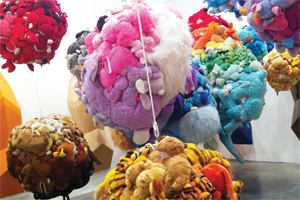 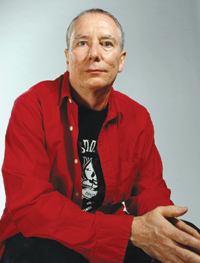 The late Mike Kelley was a fixture of the art and music worlds, at left.

Sad news: University of Michigan art school grad Mike Kelley was found dead in Pasadena, California the other day, an apparent suicide. I knew him in passing on campus in the old days, just another long-haired nice kid trying to get high and get laid and get by. And he got all he wanted, partly by fronting for the proto-punk noise band Destroy All Monsters (a contemporary of the MC5 and Iggy Pop). He earned his BFA here, then his MFA at the California Institute of the Arts, where he studied under Laurie Anderson and formed the art-band “The Poetics.” Then he skyrocketed: The New York Times called him “one of the most influential American artists of the past quarter century.”
I love his drawings of garbage, but Kelley is best known for wild, large-scale assemblages of, among other things, drawings and paintings, his own writings, sculptures, videos, dolls and stuffed animals sewn onto or covered by hand-knit afghans. At first he would join in with performance art, but he gave that up in 1986 because he had to get drunk to do it.  (One of his last performances was with Sonic Youth at MIT and they used his art on the cover of their 1992 album “Dirty.” God, that was 20 years ago.) Throughout, his work is known for one thing:  attitude. Anarchic and anti-establishment. Gross-out and young and funny. Sardonic, parodic, unique. It is bizarre but exhilarating and with heart. And people love it. Including the people that count: museum curators, gallery owners, civilians with big bucks. He was a smash hit with Wall Street types who bought tons of his stuff to make themselves look hip.
Major retrospectives of his work have been staged in New York, L.A., Munich, Barcelona, and at the Tate in Liverpool. He will be represented at the upcoming Whitney Biennial, his eighth appearance in that show. Kelley was born and raised in nearby Westland, but his lone show around here was in 2010. In conjunction with London-based Artangel and the Museum Of Contemporary Art Detroit he staged a work of public art, “Mobile Homestead,” in which a facsimile façade of his childhood home was mounted on a flatbad and hauled from MOCAD through the Irish area of Detroit, Corktown, down Michigan Avenue to Ford Headquarters and Greenfield Village in Dearborn, and finally to his old home on Palmer Road. Now he’s home for good. Rest in peace, Mike Kelley, wherever you are. And don’t forget to kick out
the jams. 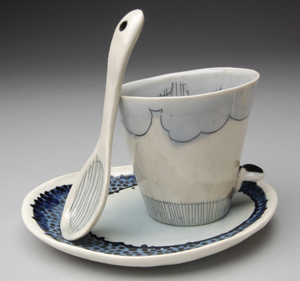 Drop everything and hurry over to the Clay Gallery on Main for the last week of their “Cups of Fire” exhibition. The Clay Gallery, if you’re new in town, is Ann Arbor’s leading co-op of local potters andceramicists. They split the costs of their charming venue and share the space to show off their wares. Formerly the Potter’s Guild, this is their 28th year and they now boast 21 members. The art is all handmade and includes fine art and sculpture, wall pieces, decorative and functional pieces, all done in, well, 21 different styles.  The gallery periodically hosts shows for outside artists, but the “Cups of Fire” exhibit is their first national competition. And it features – you guessed it – cups and mugs. The 313 entries came from all around the country, from which 169 were selected by juror Susan Beiner. Susan earned her MFA at UM and now teaches at Arizona State University. Her pieces are part of the permanent collections of museums in America, Europe and Asia. She was impressed by the quality of the craftsmanship and variety of imagery, color, composition and narrative in the entries. The show is the brain child of Clay member Yiu-Keung Lee who midwifed the whole thing over the past year. Mr. Lee earned his BFA from Eastern Michigan University in ceramics and drawing, and his MFA at UM in ceramics with a minor in drawing. Maybe it’s just me, but I like an artist who can draw.  Now he’s teaching at Eastern and breathing a sigh of relief that “Cups of Fire” has been a raving success. Upcoming exhibitions will feature the work of Janell Songer and Geralyn V in April, and in May the estimable Marcia Polenberg.  Call for more info:  734.662.7927.