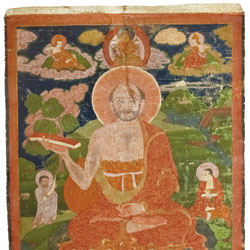 Thangkas are Tibetan and Nepalese religious paintings on silk. They grace the walls of sacred temples and monasteries, recounting scenes and exploits from Buddhist mythology (especially from the Vajrayana branch of the faith). They are colorful, often bright and always pleasing to the eye. Running from February 23 through June 9 is a special exhibition of them at the University of Michigan Museum of Art: “Buddhist Thangkas and Treasures: The Walter Koelz Collection, Museum of Anthropology.” Thangkas are didactic devices – teachers’ aids – steering devotees toward enlightenment. They portray the Buddha and Buddhist deities and they simultaneously serve as yantras (visual mantras) and mandalas (foci of attention as a path to meditation and trance).  For rubes like me, they’re just really pretty. I bought a thangka at a garage sale many years ago. It was darkened from years of incense smoke exposure and the borders had been cut off, but every time I look at it on the wall I nearly lapse into a state of karma.

In conjunction with the exhibit is a special talk in the UMMA Stern Auditorium by Gelek Rimpoche, on Sunday, February 24 at 3pm. You should get there early. Gelek is a genuine lama, nephew of the 13th Dalai Lama and tutor of the current, 14th Dalai Lama. After fleeing Chinese barbarism in Tibet he founded Jewel Heart in Ann Arbor in 1988 and gained an international following, including Allen Ginsberg and Philip Glass who did fundraising benefits for him. The exhibition is part of the enlightened UM Collections Collaborations Series, which showcases the renowned and diverse collections of the University of Michigan. In this case, the items highlighted are from the Museum of Anthropology, located on Central Campus at 1109 Geddes (734.764.0485). Stop by to see more.

Also at the UMMA, February 2-May 5, is “El Anatsui: When I Last Wrote to You about Africa.” El Anatsui is Africa’s most widely acclaimed contemporary artist, and this is the largest compilation of his works ever assembled: sixty pieces from public and private collections worldwide. The exhibition spans four decades and includes massive metal wall pieces and large-scale, monumental floor installations. His technique includes the assembly of lost objects that we readily use and pitch, thousands of cast-off beer bottle caps, for example, melded into shimmering, moving patterns with stunning visual impact. The show also is comprised of work in wood and ceramics, as well as drawings, prints and paintings, often all “married together.”

On Tuesday the February 5th from 5-7 pm in the Stern Auditorium join a roundtable discussion: “African Workshop: What is African Art?” Tell the truth: when’s the last time you were at a roundtable? Then, at 5pm on Thursday February the 7th at the Michigan Theater is El Anatsui himself. After I get his autograph I’m going to make sure that he’s seen Detroit’s Heidelberg Project, the monu-monu-monumental assemblage that El Anatsui may appreciate more than anyone.

Just a few miles due east in friendly Ypsilanti, Eastern Michigan University’s Art Department is hosting three exhibitions.  The first, running through February 8, is the Annual Juried Student Art Exhibition at the Ford Gallery. It is juried by none other than Gary Grimshaw, the world famous poster artist from the psychedelic sixties. He grew up in Lincoln Park, south of Detroit, and his best friend in high school was Rob Derminer, aka Rob Tyner of the MC5.  It was natural that he was the house artist for the Grande Ballroom, but he was just as popular at the Filmore and the Avalon Ballroom in San Francisco. As we go to press, the winners have not been announced, but keep your eyes out for Heather Kubacki and her jet print posters for the Arts, Beats and Eats festival in Royal Oak and the Otaku Anime Club. And look for the prints and screens from Bethany Bruce and Inna Gringauz. I love the necklaces of Julie Willaker, done in bronze with beads, quills and threads.

The Graduate Student Art Exhibition runs from February 18 to March 15, also at the Ford Gallery. Melissa Machnee has produced mind-boggling faux taxidermy of a deer and of a hybrid wolf-and-sheep, using Styrofoam, aluminum, fabric, paint, plastic, bronze, faux fur, rubber and glass. Erik “The Iron Eagle” Simmons has a cool poster that is a throwback to the 60’s. The Annual Faculty Exhibition is at the University Galleries through February 26. I’m a sucker for Professor Margaret Davis’ hyper-real oil paintings. Do note that the Ford and University Galleries are not next to each other. 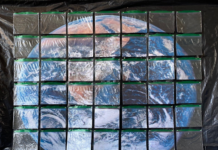