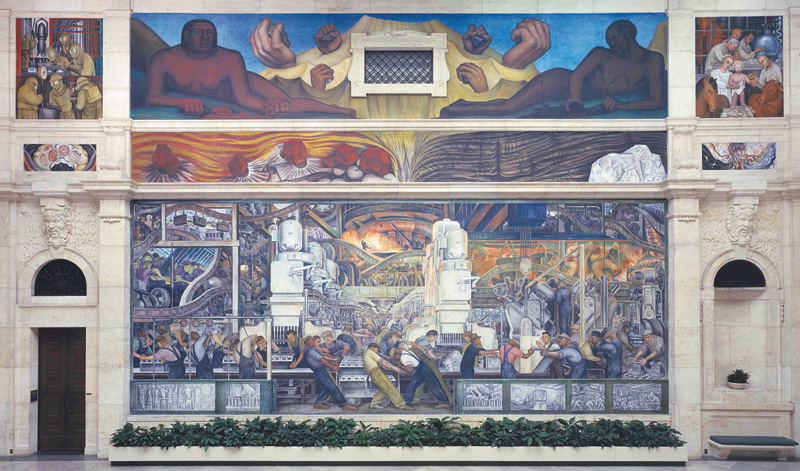 Through July 12 the Detroit Institute of Arts presents “Diego Rivera and Frida Kahlo in Detroit.” We, in Southeast Michigan, know Diego Rivera from his monumental “The Industry of Detroit or Man and Machine” murals covering the DIA’s Rivera Court (believed by many to be his single greatest masterpiece). The exhibition explores husband-and-wife Rivera and Kahlo’s year in Detroit—1932-33. He was 45 years old, a world famous celebrity artist at the height of his creative powers. She was 24, almost unknown in the art world, and just beginning to find her artistic stride. Kahlo had contracted polio as a child, leaving her with a deformed leg and a defiant personality. When she was 18 she suffered a horrifying bus accident that left her other leg broken in 11 places and her foot crushed. Her collar-bone, two ribs and pelvis were fractured, and an iron rod skewered her left hip and vagina. In Detroit Kahlo underwent her greatest injury: the miscarriage of her first and only pregnancy. The grief triggered her most important artistic realizations, including the paintings “Henry Ford Hospital or the Flying Bed” and “Birth or My Birth,” both completed in 1932. The former depicts her raw, dreamy, poster-like reaction to losing her baby. The latter is a painting of her own small head emerging from the vaginal canal of a birthing mother whose face is obscured by a white sheet. It was shocking, revolutionary, and for Kahlo, cathartic. 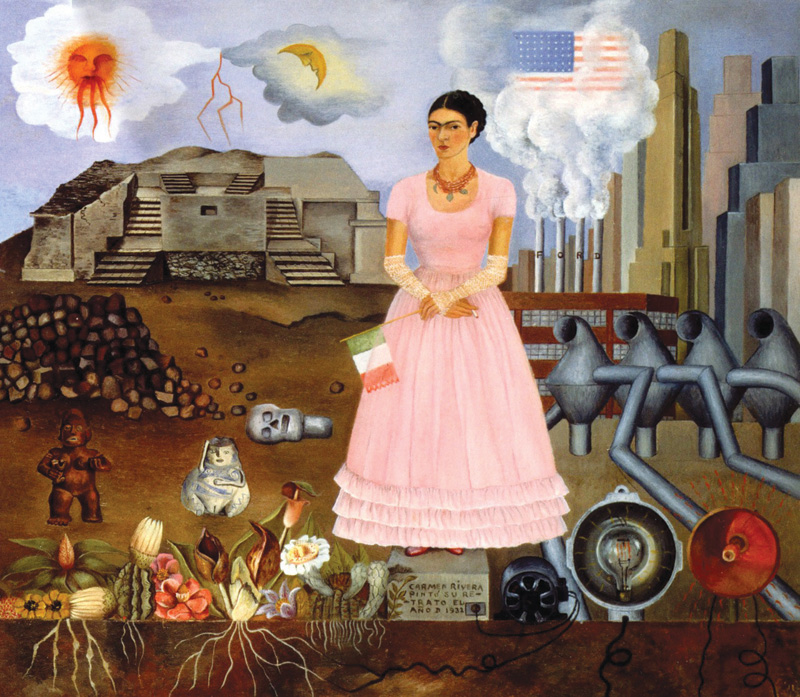 The marriage was legendary for its volatility and its excesses in addition to its prodigious artistic accomplishment. They drank heavily. He carried a gun. Both were dyed-blood-red-in-the-wool Communists. Rivera ‘s political leanings served as the emblematic theme of his murals, which in his mind meant championing the working man, indigenous peoples and a utopian vision of the proletarian future. It also meant demonizing capitalism, industry, free enterprise and Western civilization. Nelson Rockefeller commissioned him to paint a mural on the subject of “Man Looking for a Better Future” in the atrium of New York’s Rockefeller Center. But Rivera included and refused to remove a romantic depiction of Lenin, the bloodthirsty Communist tyrant responsible for millions more murders than Hitler. So Rockefeller paid Rivera and had the whole thing sledgehammered into powder.  Bravo. Rivera later reproduced the work in Mexico.

Frida and Diego were notoriously promiscuous. She slept with Leon Trotsky and other men and women. He slept with her sister and untold other women. But for some, for Frida and Diego, at least, art transcends faults and foibles. Rivera began painting in France and became an accomplished cubist, redolent of Georges Braque, Kazimir Malevich and Juan Gris.   Throughout his career he executed mesmerizing representational paintings, particularly portraits. His murals are informed by the rich tradition of the Mexican muralismos but remain distinctively awe-inspiring and revered.

The show highlights a number of large-scale studies (Rivera called them cartoons) that he prepared prior to applying the final version to the massive Rivera Court walls. Then check out the Rivera Court afterwards, and you’ll see it as you’ve never seen it before. And then check out the DIA’s wonderful ancient Meso-American art collection to see where it all began.

Kahlo’s style defies simple categorization. Strolling through the show (more than 80 works of art), her inspiration seems drawn from René Magritte, Yves Tanguy and even Salvador Dali.  It is surrealism but with a painfully personal and, at times, primitive flavor, no doubt informed by her extraordinary life story. Surreal expressionism, I guess. Perhaps an ironic twist to the story is that Frida’s work now commands more reverence than Diego’s.

Don’t miss this show. This is the only venue and it won’t be seen anywhere again in our lifetime.