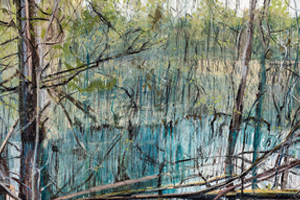 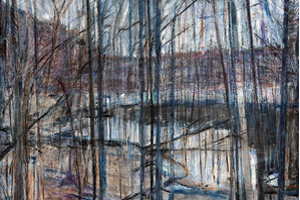 The 53rd Ann Arbor Street Art Fair runs this month from July 18 through the 21. If you like crowds, it’s always a mellow mob-scene. Just don’t forget to wear your hat and carry a large water bottle. The art gets better every year (more art, less kitsch), with artists coming from all over the country. One local perennial exhibitor and award-winner is Karin Wagner Coron.  She won’t be in this year’s fest, though, because she’s having a special exhibition at the WSG Gallery on Main, now through June 28th. The show, called “Wetlands,” is a series of drawings and installations created in response to current conditions in our native wetlands.  I find this series spectacular, a juxtaposition of abstraction and precision. These pieces transport me to a peaceful, awe-inspired tranquility – I guess that’s what nature does and art should. Coron earned her Bachelor of Fine Arts degree at Eastern Michigan University and did grad work there in printmaking. Karie is co-owner/manager of Format Framing and Gallery on North Campus with her husband Steve, a triple-threat artist (sculpture, drawing and painting, photography) and the head of the Visual Arts Department at our vaunted Community High School here in Ann Arbor.  Lucky them!

The University of Michigan Museum of Art has two shows on now through September 2.  The first is the inaugural “Flip Your Field” exhibit. This will be an ongoing series of exhibitions curated by UM faculty, who will select artwork from the museum’s permanent collection, but outside their field of specialization. The first guest curator is Celeste Brusati, Professor of History of Art, Women’s Studies, and Art and Design – is that all? She is a world-renowned expert on the visual art and culture of the Netherlands from the fifteenth through the seventeenth centuries, but has assembled a deeply satisfying exhibit of 20th century abstract art.  Think Helen Frankenthaler, Kandinsky, Miró, Robert Motherwell and many other heavy hitters. It’s a chance for Professor Brusati to have fun, for the UMMA to show off, and for us to be amazed by “modern” art, some of w 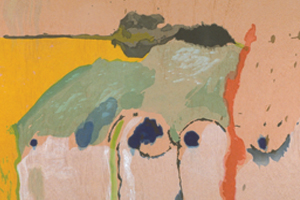 hich was created nearly a century ago.

The second show, “Judith Turner:  The Flatness of Ambiguity,” is an exploration of this American artist’s dynamic photographic renderings of architecture. Turner’s signature style consists of highly abstract black-and-white compositions that tease with the ambiguity of light, shadow, and tonality to reveal visual relationships that are not ordinarily apparent.  The exhibition will feature 40 works that span Turner’s three-decade career.

Also note that Haroon Mirza’s installation at UMMA is closing on July 22. From London England, Mirza garnered the Golden Lion award as the most important young artist at last year’s Venice Biennale, the world’s most important art happening. This has been Mirza’s first solo exhibit in the United States, and on the closing day at 2pm a UMMA docent will lead a discussion about this show.

Now through August 26 at the charming and oh, so impressive Toledo Museum of Art is “Revelation:  Major Paintings by Jules Olitski.”  This is the first exhibition since Olitski’s death in 2007 and represents the major periods of his career (mainly the 60’s and 70’s).  The show demonstrates why he is considered one of America’s most notable modern painters. More than 30 works are featured, including his signature Color Field paintings.  Like his contemporaries, Frankenthaler and Morris Louis, Olitski’s focus was on material and surface, eliminating the illusion of depth. Summer is an auspicious time to visit the TMA because in addition to the splendid permanent collection you can stroll the stunning sculpture garden that wraps around the museum. And mark your calendars now for the exclusive North American exhibition of Manet portraiture – forty paintings of his family, friends and 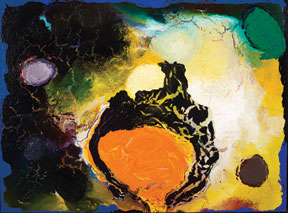 famous figures of his day , October 7th through January 1st, 2013, after which it travels to the Royal Academy of Arts, London.