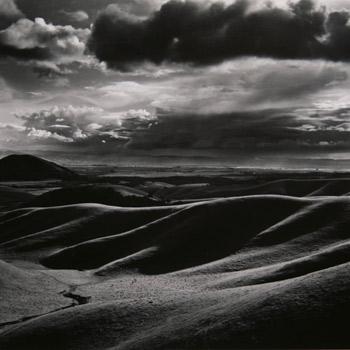 September is the best month in Ann Arbor. The weather is mild. The annual return of the students breathes youth, vigor and optimism into the air. Love suffuses the UM campus. What better setting for the appreciation of beauty? And what better setting within a setting than the University of Michigan

Museum of Art? With free admission, it is the perfect high-class cheap date for students and townies alike. As always, there are several remarkable exhibitions for your viewing enjoyment.

Showing now through January 5, 2014, is “Adolph Gottlieb: Sculptor.” Gottlieb, born in 1903, was one of the seminal Abstract Expressionist painters who put New York City at the center of the art world in the years following World War II. As a teenager he studied in Europe, and was teaching at Parsons School of Design and at Cooper Union in 1935 to support his art habit when he and nine other painters including Mark Rothko (known then by his maiden name, Marcus Rothkowitz) began exhibiting their work together. They called themselves “The Ten,” and their style, Abstract Expressionism, put an emphasis on spontaneous, “automatic,” subconscious creation.

It appealed to the collective unconscious of an audience imbued and immersed in the gospel of Sigmund Freud.

emblematic of this style, but the UMMA has a fine permanent collection of such “modern art” including gigantic wild-and-crazy sculptures by Marc di Suvero outside the entrance to the new wing. A masterful colorist, Gottlieb—with Rothko—developed the abstract “color field” style of painting. He once said, “If I made a wriggly line or a serpentine line it was because I wanted a serpentine line. Afterwards it would suggest a snake but when I made it, it did not suggest anything. It was purely shape.” In other words, it can mean something different to each viewer, or, it can mean nothing at all, simply evoking an emotion or state of mind. If your cheap date asks what it means, display a little museum know-how and demand that he look at the bottom of his shoe and tell you what that means.

In 1967, Gottlieb took up sculpture. For the next year-and-a-half he worked in aluminum and bronze and

produced works of various sizes, exploring themes of form, color and space as he had in his paintings, but in this case in 3-D. It is this period in Gottlieb’s career that the

current UMMA show explores. While you’re there, check out the “Brett Weston Landscapes” exhibition (through December 1). Weston (1911-1993) is one of the iconic nature photographers of the 20th century. From sweeping landscapes to striking close-ups he brings the eye of a painter to the frame of a photographer. If your date asks you what these pictures mean, it’s pretty much over.

I dare say that most Americans love Dr. Seuss. My granddaughter, Gigi (age 3), is a fanatic, and yours truly delivers spirited oral interpretations of these distinct American classics. It is with curiosity and delight, then, that I look forward to the special exhibition “Hats Off to Dr. Seuss,” opening on Friday, September 20 and running through Sunday, October 6 at the Art Leaders Gallery in West Bloomfield. The show opened to great fanfare at the New York Public Library last February and this is one of 16 stops across the country. The exhibit is in honor of the 75th anniversary of Dr. Seuss’ “The 500 Hats of Bartholomew Cubbins,” the second of his 46 books. The good doctor, born Theodor Seuss Geisel in 1904, was something of a hat collector—he had hundreds of them, and this is the first time any have traveled outside his

estate since he died in 1991. He adorned his many

creations in hats (not just The Cat) and would festoon his dinner party guests in them, making for happenings somewhere between the giddy and the surreal. Geisel is not only the bestselling author of children’s books of all time; he won an Academy Award in 1947 for Best Documentary Feature and another in 1950 for Best Animated Short Film; He was a contributing illustrator for Vanity Fair and Life, and he had a wildly successful career in

advertising. Did I mention 11 television specials, four feature films and a Broadway musical?