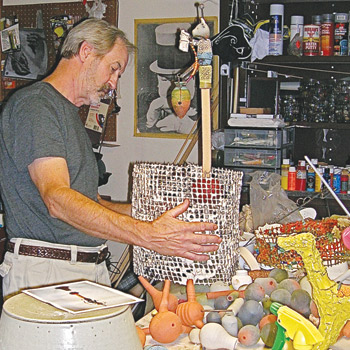 Consider the vessel. A vessel may be described as a hollow utensil or closed containment of space used as a receptacle. Nationally acclaimed Michigan artist Thom Bohnert dismisses the traditional idea of a vessel by creating aesthetic sculptures of vessels that invite us to explore alternative ways to perceive, interpret and experience the spaces they contain.

Abstract expressionist, David Smith once remarked that the only difference between drawing/painting and sculpture was the addition of a third dimension. Bohnert's wire-drawn vessels blur the distinction between sculpture and painting by suggesting the form of a vessel through contrasting positive and negative space while using the color of glazed clay shapes to evoke and express emotion.

Fascinated with drawing at an early age, Bohnert was discouraged from pursuing an education in art for practical reasons and entered Southern Illinois University at Edwardsville in 1965 to major in mathematics. Within a few years, his interest in exploring the nature of abstraction led to art courses where he found his strength in three-dimensional work and

began to focus on sculpture, finding clay and glazes as his best means of expression. In 1961, Bohnert entered the prestigious Cranbrook Academy of Arts where he became interested in challenging traditional ideas of space and acquired his MFA under the instruction of acclaimed ceramicist Richard Devore. "I wanted to get inside the form,” Bohnert says. “Most ceramic vessels are a containment of closure decorated on the outside–the inside is a mystery. I was interested in bringing the inside out."

Taking a minimalist and linear approach, Bohnert sculpts three-dimensional 'drawings' of vessels in wire, visually implying volume while exposing the inside of the pot, to

address the space inside the form. His challenge to the viewer is to consider what is absent. Bohnert embellishes areas of his spatial vessels with

abstract shapes of clay and brightly colored glazes, drawing attention to the inside of the structure to "have an exchange of personal information with the viewer”.

Bohnert labels his work through a system he refers to as the 'trois cirques' or three rings. He explains  “each piece has an identity and set of emotions labeled with a triad of thought processes or states of being, representing the spectator, the performer and the void or participant in the space.”

When Bohnert first began showing his work some 30-plus years ago it was not readily accepted because most people had a more conservative view of ceramics. He recalls,

"I was breaking tradition. In the 70's, when I won Grand Prize in an important show at the Detroit Institute of Art, people were provoked. My work was far outside the box." Ironically, the juror of that show was none other than the late Peter Voulkos, an innovator of the Abstract Expressionist movement in ceramics who, over the years, acquired the largest existing collection of Bohnert's work. Voulkos commented that "[Bohnert's work was]…everything ceramics is not supposed to be but everything ceramics is about."