America’s greatest summer celebration of art and entertainment, the Ann Arbor Summer Festival, opens early this year, with Bonnie Raitt at Hill Auditorium on Friday, May 25.  This is the 31st incarnation of the Fest and somehow it keeps getting better, thanks to Festival Director extraordinaire, maestro-with-the-magic-touch, Robb Wolfe.  I asked him for an upcoming sleeper show that might not get the local press it deserves. Answer: Feist at the Power Center on Tuesday, June 5.

The mononomial Feist has so many facets that I think of her act as performance art, including an innovative use of video projections and multi-media flourishes. The 36 year-old Canadian has chalked up enough awards, plum appearances and record sales for several careers. Her first three albums sold a total of 2.5 million copies. At the 2008 Juno Awards (Canada’s Grammys) she was top winner, including Artist of the Year and Album of the Year. Her current tour is promoting Metals, which was released last September and earned another Artist of the Year, Adult Alternative Album of the Year and Music DVD of the Year. She’s played with artists from The Ramones to Radiohead, and Beck to Wilco, but her music is beyond simple description. I find it fierce, tight and passionate, young Patti Smith meets early Sheryl Crow. She’s appeared on Letterman, SNL and A Colbert Christmas.

Even on Sesame Street with a cameo on last year’s movie The Muppets. She’s been lionized by Time magazine, the New York Times and Vanity Fair (photo by Annie Leibovitz).  She can be heard on movie soundtracks and big-budget ad campaigns. And she’s just as hot in Europe. This may be your last chance for an intimate, up close look at Feist before she ascends, inexorably to living legendhood. And you can check out Official Summer Festival Photographer, Myra Klarman’s giant blow-up prints of last year’s Fest on the Power Center walls.  Who knows, you just might catch a glimpse of yourself in one of Klarman’s evocative shots. (Or am I the only one who looks for himself?)  Annarborsummerfestival.org.

Landmark Theaters is the oldest and best art and indie movie chain in the United States.  The only Landmark in Southeast Michigan is The Main Art Theater in rollicking Royal Oak, a forty-five minute drive from Ann Arbor.  Opening in its lobby alcove on Friday, May 4, and running through the month, is a remarkable exhibition of photographs of fruits and vegetables by Mark Bertrand. Mr. Bertrand lives and works in Royal Oak and hasn’t quit his day job as physical therapist at William Beaumont Hospital. But his consuming passion is photography. He has a fine arts degree from Oakland Community College, where he spent all his free time in the photo lab (he eschews digital). 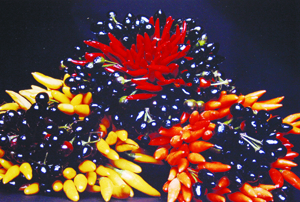 His photographs are dazzling, transfixing works of art, the product of patient, meticulous technique and a sensitive, loving eye. I’m not the only one who thinks so. Previous exhibition venues include the Washington Street Gallery in nearby Ferndale, the most important art gallery in metropolitan Detroit. (Inside scoop: if you’re a beer drinker, don’t miss the Royal Oak Brewery, two blocks from the Main Art, whose brewmaster, Tim Selewski, is known as the best in America.)  Google Landmarktheaters for easy directions.  Cheers, Mark!

Local chefs and food personalities are lending their expertise to help Growing Hope raise money to keep residents of Washtenaw County fed. Here’s how to join the auction!