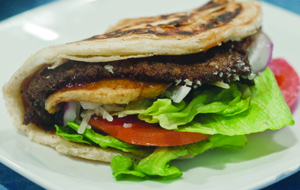 It’s rare that we get to welcome a completely new cuisine to our area, but this is one of those occasions: Samosa House, in the old Red Sea space on Washtenaw, is our first Somali restaurant. Owned by sisters Amina and Hawa Hassan, Samosa House showcases Somalia’s cuisine, demonstrating its culinary influences from India, the Middle East, and Italy.

It also demonstrates the Hassan family’s creativity and resilience.  One item, the Minato –sauced ground beef, vegetables, and a sprinkling of cheese baked inside a bread bun – was invented by their parents to serve at the family’s original restaurant in Mogadishu in the 90s.  (The restaurant itself was an adaptation to circumstances. The family perfume store was destroyed by the militias and they took advantage of their grandfather’s food distribution company to open a restaurant.) The streets of Mogadishu weren’t safe for women, so the women in the family did the cooking, sending the food to the restaurant in the morning.  Unfortunately, that meant that they couldn’t serve sandwiches, which would need to be prepared fresh. So they re-invented the calzone, naming it based on the Somali word “min,” for bomb, after a conversation in which a customer hefted one and said “this is really heavy” and was jokingly told “that’s because it has a bomb in it!”  (We’re told it’s now a popular Mogadishu item, but not well known elsewhere in Somalia or the Somali diaspora.) 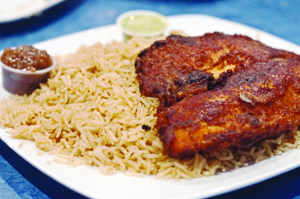 Having grown up in the family business – the Hassans owned several restaurants after coming to the United States in 1996, and used to supply samosas to local stores – it was natural that Amina and Hawa would open a restaurant. And since Amina already had a reputation for making samosas for school fundraisers, the name was inevitable.  (It’s also somewhat confusing; they regularly get Indian patrons who assume it’s an Indian restaurant.)

The Hassans have adapted their dishes and offerings to meet their customers’ demands, offering versions of Somalian dishes that wouldn’t be found in Somalia such as more vegetarian and chicken dishes.  They’re also planning to add more selections as time goes on. If you’re familiar with other Somali restaurants, you may see some differences here (though to be honest, you’ll see plenty of differences between any two Somali restaurants, both due to regional cuisine and individual style).

Samosas:  With a name like “Samosa House,” these had better be good. And they are —  huge, folded fresh for each order, with a crisp shell and fillings spiced with cinnamon, cardamom, and crushed pepper. In Somalia, they’re a special occasion food, most closely associated with evening meals during Ramadan. They’re also always meat-filled; a vegetarian samosa in Somalia would be considered “cheap,” and many Somalis won’t eat them.  Fortunately, the Hassans aren’t bound by that convention. The veggie version has a hint of sweetness from the cinnamon and cardamom. The delicate (but not bland) flavor of the vegetables and the spices shine through. (It was the favorite of some of our group.) The meat versions have more savory undertones of their respective meats; the lamb is Joe’s favorite, while the beef ones were particularly nice with the tamarind chutney. Two or three of these could make a meal.

Falafel: different from Middle Eastern chick pea-based recipes, theirs is a mix of six different beans plus carrots, with a fluffy texture somewhat reminiscent of hush puppies.  Well worth trying.

Spicy Potatoes: curried mashed potatoes, fried in an egg-shaped patty. They sound heavy, but they’re actually quite light. This is one of the spicier dishes, though the heat grows gradually.

Steak sandwich:  sounds boring, but it’s out of this world!  “Seriously awesome” as one of our group put it. Thin slices of crispy fried beef folded in one of their flaky chapattis with tomato, lettuce, onion, fried potato and a sweet-smoky barbecue sauce, sprinkled with a hint of cheese.   (They have a similar sandwich in Somalia, but made with pita and including hard-boiled egg.)  There’s also a chicken version.

Minato:  discussed above, this tasty “bomb” is made with  ground beef, a mix of carrots, onions, potatoes, hardboiled egg, and a bit of parmesan, wrapped in a bread shell and baked. Kind of like a sloppy joe, but somewhat drier and much less “sloppy.” One of them could even be lunch, especially if paired with falafel or a samosa.

Main dishes come with a choice of breads or rice. All are delicious. The rice is spiced with cumin, black pepper, and cardamom, and is delicious. Of the breads, chapatti is the most familiar; it’s the same as Indian chapatti.  Anjeero is the Somali equivalent of Ethiopian injera, a soft, stretchy, slightly spongy flatbread, in this case made from wheat flour and with a touch of sweetness which contrasts well with the slightly sour sukhaar stews. Muufo, thick bread patties made from white cornmeal and wheat flour, have the same slight sweetness with a soft but dense chewy texture. You can pay a little extra and try more than one.

If you’ve had prior contact with Somali food, you may know that, traditionally, Somalis like a banana along with their meal to cut up over the rice. Samosa House doesn’t serve bananas automatically, but they do have them and they’re happy to bring you one if you ask. 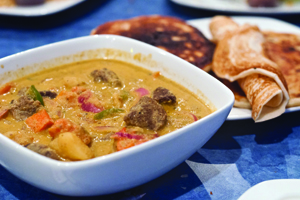 Sukhar: a mainstay of Somali cuisine, these stews vary regionally. In Mogadishu it’s usually a cubed meat in a tomato-based sauce, while in other parts of the country it may be a drier dish with caramelized onions and peppers. The Hassans wanted to do something different, so they transformed the Mogadishu regional variant into a creamy version with a little bit of dairy as their base.  We’ve tried both the lamb and the beef on different occasions, and prefer the lamb. The curry has both sour and sweet flavors, with a mix of vegetables, and tender chunks of meat. It’s not especially photogenic, but it is very, very tasty. (Note: if you’re sensitive to MSG, you may want to be careful with this one.)

Fried Tilapia: Spiced and dry-fried, this perfectly cooked fish is flavorful and wonderful. Goes fabulously with their rice. Expect to see more seafood dishes on the menu as the Hassans expand their offerings, as seafood is very popular in coastal Mogadishu.

Spaghetti: obviously a legacy of Italian colonial rule, this is now what many Somalis eat after Friday prayer. Like samosas, it’s a special occasion dish. Samosa House’s version is a large plate of spaghetti topped with a slightly spicy tomato sauce and slices of your choice of crisp-fried beef (similar to a Mexican milanesa) or chicken. We tried it with the beef, which is the same delicious thinly sliced beef that is used on the sandwich.

As a relatively new restaurant, Samosa House is a work in progress. They plan to expand the menu, and they’ve also got some dishes they can do on request which aren’t on it (yet), such as Goat Sukhar, so it’s worth asking about other options, especially if you’re familiar with the cuisine. Also be aware that it’s a small restaurant with limited staff, so call ahead if you’re bringing a big group. Despite the fact that they make everything fresh, they’re actually pretty fast, especially with items like the samosas and sandwiches. They’re rapidly becoming a favorite for us.

Lisa and Joe have been blogging about food in the Ann Arbor area (and points beyond) since 2004.
Check them out at www.kitchenchick.com