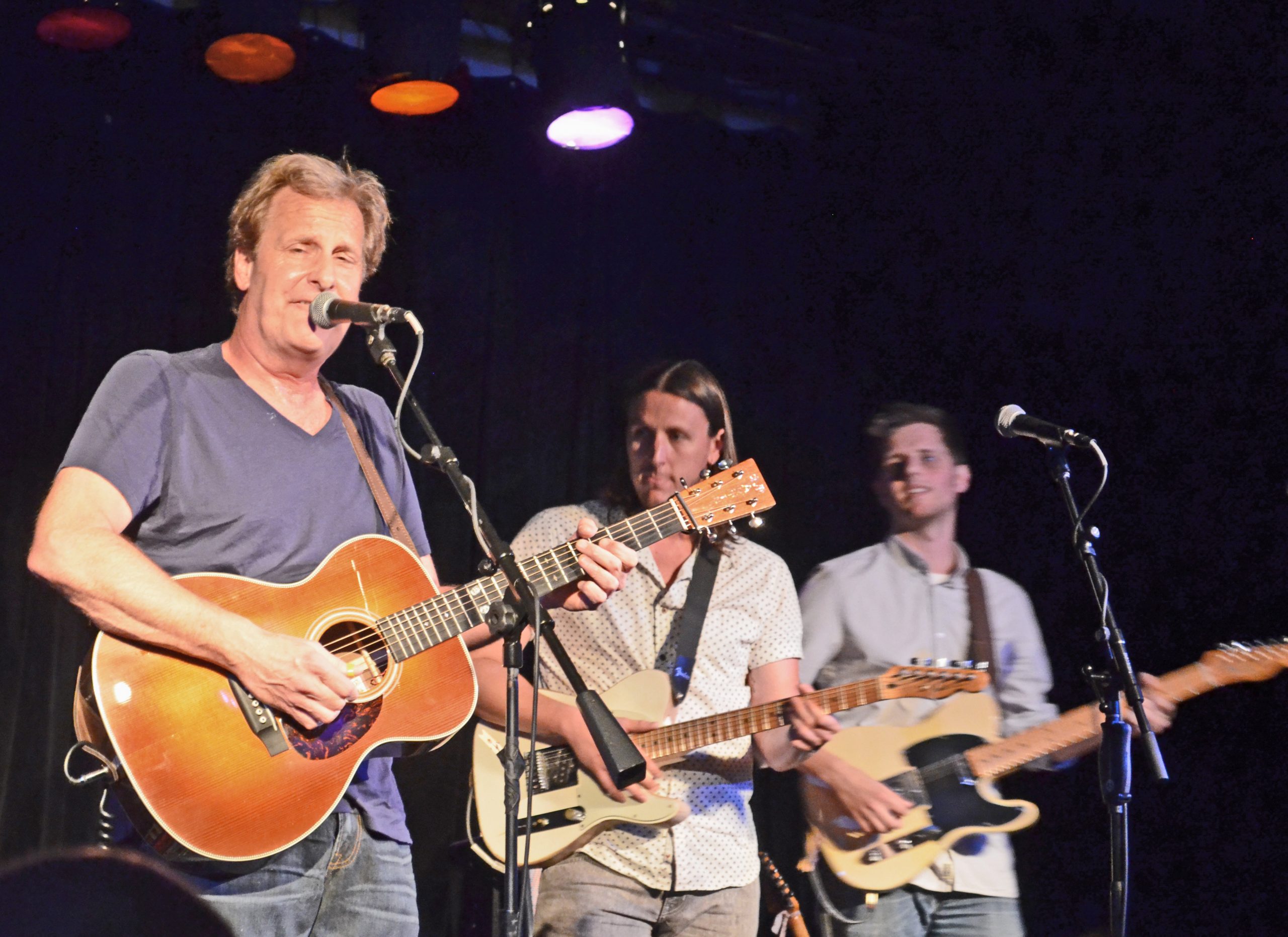 Jeff Daniels is practically our Toledo neighbor. The Hollywood star doesn’t live in Beverly Hills, but in Chelsea, Michigan, a small town about an hour north of here.
When I saw the news that he was playing a concert with his son, Ben, at The Ark in Ann Arbor, I bought tickets not knowing anything about the actor’s music. I just assumed it would be a memorable evening. After all, Daniels has entertained millions of folks playing roles as diverse as the urbane and cynical newscaster Will McAvoy on The Newsroom and lovable stooge Harry Dunne in Dumb and Dumber (plus the upcoming sequel—more about that later).

I imagined that on stage with a guitar and a microphone, backed by his son’s band, Daniels could easily skate through the night strumming a few chords and telling amusing stories.

I apologize for my ignorance, Mr. Daniels.

Yes, he told a number of very amusing stories and interjected many hilarious comments between songs on Sunday night (August 17), but Jeff Daniels is definitely a talented musician in his own right.

The guy can finger-pick a nimble lead on guitar. He can growl a blues vocal or croon a gentle ballad. He writes songs that are funny, poignant, melodic and catchy. E.g., Daniels is a legit musician, unlike many celebrities who use their fame to prop up their mediocre hobbies.

I’d describe his style as similar to wordsmith-folkies like Mose Allison, Lyle Lovett, and John Prine.

Put it all together and you have a down-to-earth movie star/musician/raconteur/proud father sharing the stage with his son’s talented band, playing music near and dear to his heart, before a jam-packed and adoring hometown crowd.

How could it not be a great night for all? 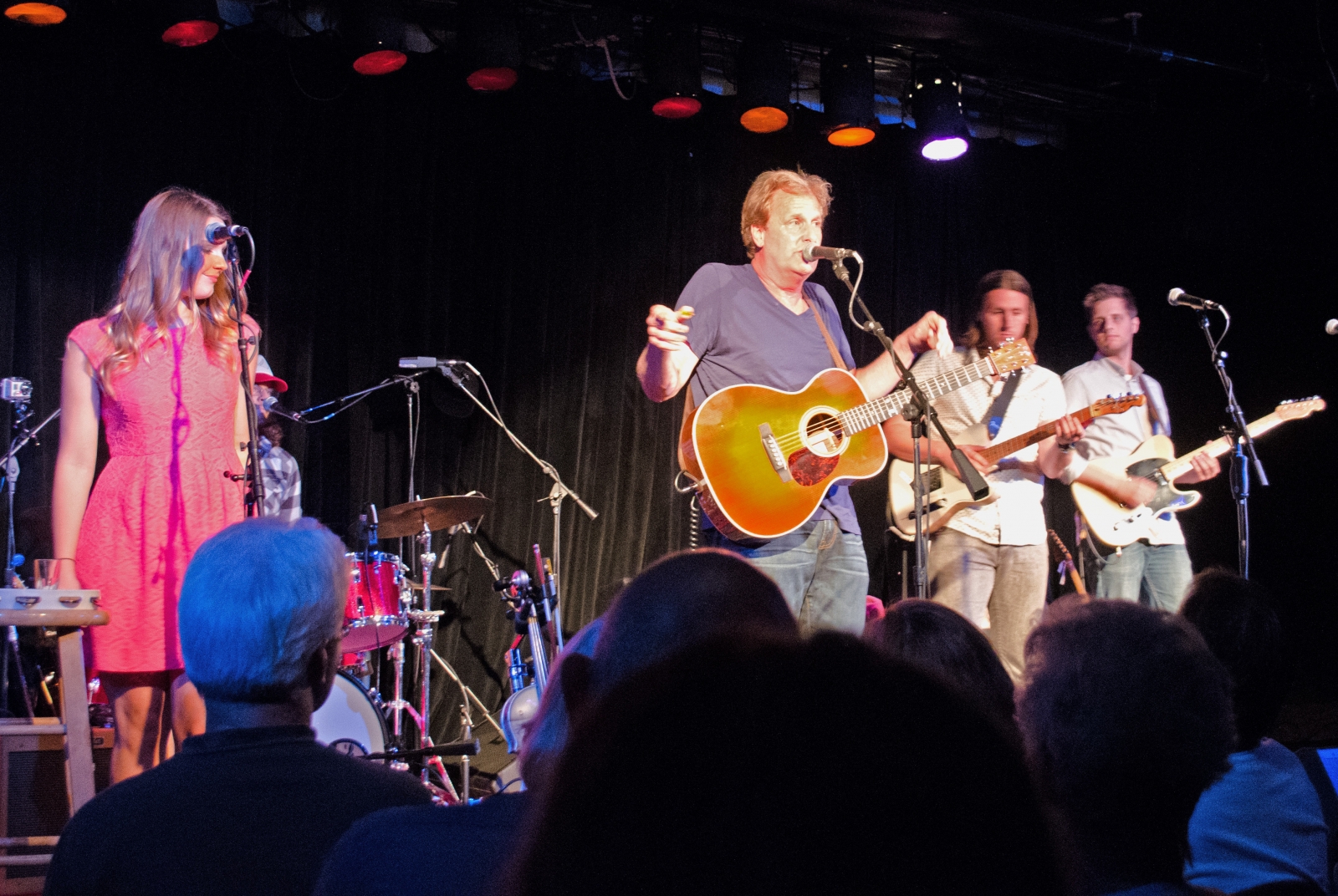 Daniels, wearing a plain blue V-neck shirt and jeans, led his son’s band from the opening song,  saying it was “beyond paternal pride” to be standing on the stage with with Ben “right here at The Ark,” a venue he has been to many times.

The group strode through mostly Jeff Daniels originals—rolling blues numbers with lyrical wit and dexterity like “Ain’t Nothing New in New York City,” and a knockoff of “Johnny B. Goode” with the chorus: “Go Henry David, Go.” One verse included this line: “I called my congressman. He said, ‘Press 1 if you’re Big Oil; hang up if you’re not.’”
Daniels introduced one of the songs with a story about meeting a biker dude decked out in $7,000 worth of Harley-Davidson gear who told him, “I’m a pastor at my church.” Daniels shrugged, with an “of course” expression on his rubbery mug. The preacher noted there was a “heaviness” in the world, which inspired Daniels to write a blues tune. Although the encounter occurred years ago, Daniels said the song is “suitably depressing” for today.

“What the hell is going on?” he asked, citing news from Ukraine, Iraq, Ferguson, MO, and Robin Williams’ suicide, then launched into a slow burner with the chorus, “Days like these … a hat don’t help.”

He mentioned his upcoming movie, Dumb and Dumber To, indicating that he’s not looking forward to the press interviews. He imitated a critic sucking on a cigarette and asking in a Capote-esque voice, “Why in God’s name did you do this film?” To which Daniels curtly replied, “F*** you.”
From blues to folk to jazz, the guitar star of the night was George Merkel of the Ben Daniels Band. Fluid and quick on the frets, Merkel added tasteful and creative guitar riffs that embellished without overwhelming the songs.

Also standing out was drummer Wesley Fritzemeier, who midway through the night showed his multi-instrumental virtuosity by playing mandolin and classical violin, at times keeping the beat with kick drum and high-hat while plucking or bowing the strings.

A highlight of the night was the humorous yet musically slick “Close But No Cigar” in which the Danielses and Merkel played three-string cigar-box guitars, sliding along the frets for a slow, twang-infused blues, stepping and swaying together in loosely choreographed unison. The title/punchline was a rejection delivered to Daniels by the band’s female backup singer, Amanda Merte.

The band played a railroad song in which an audience member was invited onstage to blow a wooden train whistle, on Daniels’ cue. The volunteer produced more of a squawk then a whistle, but gave it the old college try and blew with abandon in the fast-paced finale as the train picked up speed.

Jeff Daniels stood alone onstage for a solo on an obscure, early Bob Seger song, “Railroad Days,” and led the band with a funky, downward guitar riff threaded through the blues standard, “Rollin’ and Tumblin’.”

The show closed after nearly 2½ hours with father and son playing a duet on a song that Jeff wrote when Ben was 3 years old. 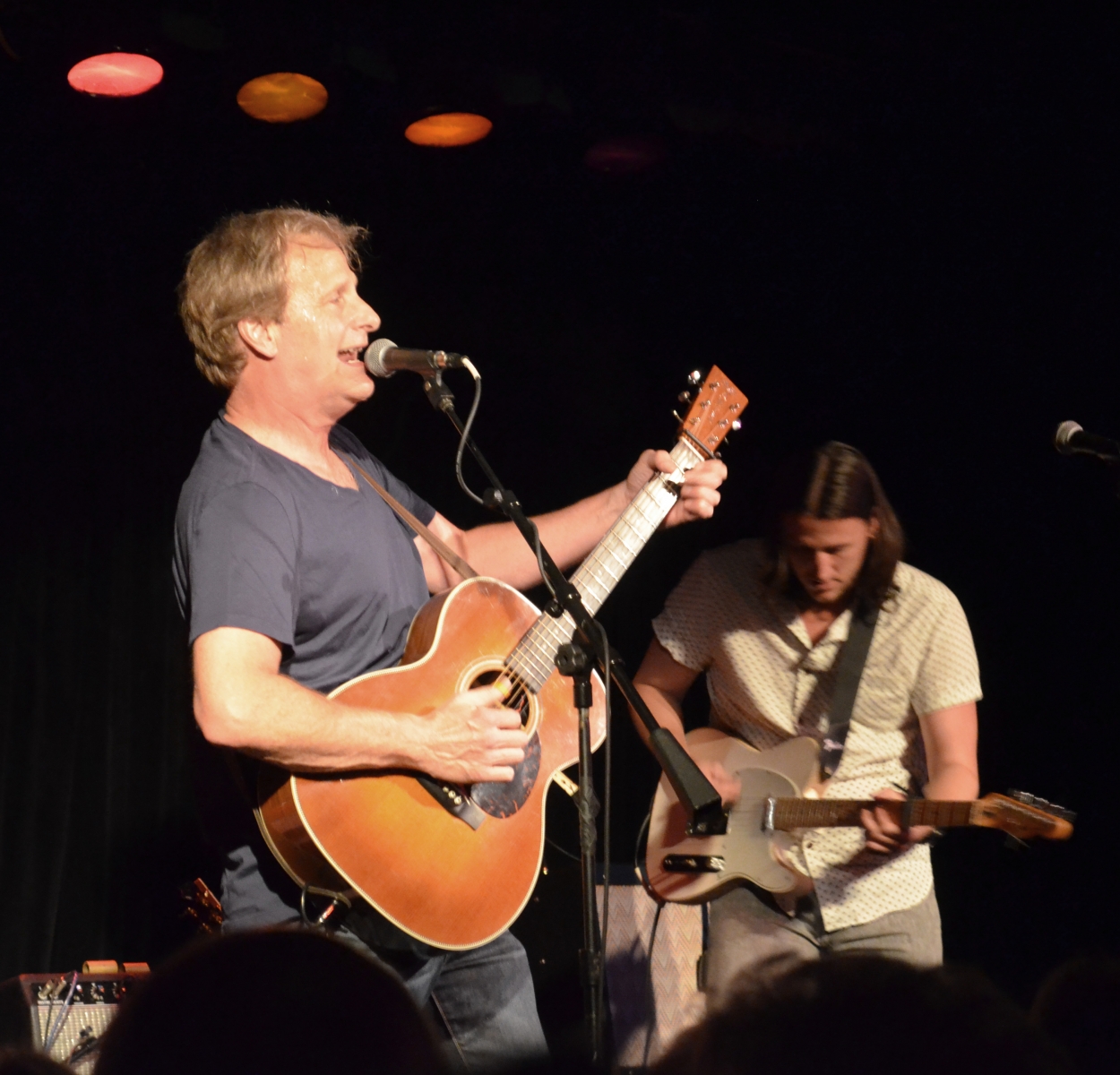 A poignant ballad, Daniels sang that it’s not about the money or the fame, “or the marquee screaming my name … but that young boy looking up at me.”
For some Hollywood stars that line would seem patronizing, but for Daniels the words felt genuine. The father and son embraced, and when dad turned away he  patted his heart with a palm.

The concert was as entertaining as I had hoped, and the musicianship was beyond what I had anticipated. The band added a second Ark show, for Monday, which also sold out, and is in the middle of a 13-concert tour that winds up Aug. 29 in another of Daniels’ favorite places, Michigan’s Upper Peninsula.