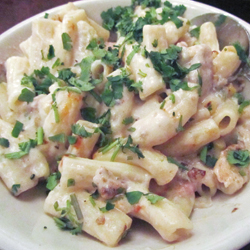 Outside, the Roadhouse’s smoker floods the parking lot with savory scents as a good barbecue should; inside, the countertops are decorated with vegetables grown on Chef Alex Young’s farm, which are featured prominently on the menu, along with burgers made of the farm’s own beef. “I feel like we’re really settling into our identity,” the chef says in a brief moment spared during preparation for an off-site dinner, “but that doesn’t mean we’ll be standing still.”

2013 will mark the Roadhouse’s 10th anniversary. Along that journey, Chef Alex and the Roadhouse have garnered recognition ranging from the coveted James Beard award to being designated as one of Bon Appetit’s “Top 10 New Barbecue Restaurants.” As Young’s Cornman Farms project has expanded, the Roadhouse has gone from buying all the ingredients, to growing a number of featured vegetables and using their own meat for many dishes. Five years ago, the Roadhouse started offering beef from their own Cornman Farms business as an option; they cut entirely over to it two years ago. “I’m still working about 60 hours a week at the Roadhouse, but now I’m doing about 20 at the farm,” says Young.

In this review, we’ve focused mainly on dishes that are usually on the menu, as opposed to seasonal ones which rotate off, but always look at the specials or you’ll miss some fabulous options. Big note: the staff are knowledgeable and helpful, and will bring you tastes of almost anything — so don’t hesitate to ask questions about the menu.

Sea Islands Sweet Potato Fries:  Hefty thick-cut fries with tender sweet centers and a sprinkle of sea salt, we think these are the best in the area. The spicy mayo pairs well and adds a kick. If you’re a sweet potato lover, you can substitute these for french fries on items like the burger.

Real Chesapeake Bay Crab Cakes: Made with a generous amount of blue crab, they’re small, but flavorful. The crab tasted fresh, and the seasoning is spot on with finely diced bell peppers and spices. The cakes are loosely packed, moist, and pan-fried to a lightly, crunchy golden sear.

Ancho Beef Chuck Chili: Especially nice during the cold months, this chili features cubes of Cornman Farms’ beef and black beans in a medium spicy ancho chili broth. A bowl or cup paired with Zingerman’s mini garden salad makes a nice lighter meal option. This can tend toward the salty side.

Rutabaga and Bacon Soup: WOW.  If it’s on the menu, definitely give this a try. Many people don’t care for rutabaga’s flavor by itself, but in this case the smokey bacon tames and even dominates over the roasted, puréed rutabaga’s split personality between sweet earthiness and a hint of bitterness. We’re smitten!  (It’s root vegetable season, and the rutabagas are grown at Cornman Farms.)

South Carolina Corn Grits:  If all you’ve had are instant grits, you’re in for a treat. Zingerman’s uses organic stone ground grits with big mellow corn flavor. Normally served with Cabot cheddar, but great without the cheese, too. Staff tell a story about an older Southern customer who called her server over to express her surprise that the grits were made from corn; she’d been eating grits all her life, but found the flavor of these a revelation.

Carolina Gold Rice: Grits aren’t the only thing from the Carolinas at the Roadhouse. This unique variety of rice, considered the grandfather of long-grain rice in America, delights the tongue with its creamy sweet flavor.

Buttermilk Fried Chicken: Large, juicy pieces of chicken, with a crust that’s perfectly crunchy and beautifully seasoned with black pepper. Even the breast piece was tender and moist. Comes with mustard coleslaw and mashed potatoes with (tasty!) chicken gravy.

Chef Alex’s Bearded BBQ Plate: Named in reference to the James Beard award (Alex is clean-shaven), this is a great plate for those who can’t settle on just one type of BBQ. You get a sampling of tender pit-smoked ribs, BBQ beef with Alex’s “red rage” tomato BBQ sauce, pulled pork with a South Carolina mustard BBQ sauce, and pit-smoked chicken with green tomato BBQ.  Comes with a side of chunky mashed potatoes and braised collards cooked with bacon. We’re particularly fond of the
pulled pork.

Macaroni, Smoked Chicken, and Monterey Jack:  Representative of the Roadhouse’s line of Mac & Cheese entrees, this is a robust, hearty meal with nice amount of heat from New Mexico green chilies. The Italian-made Martelli macaroni has a great chewy texture that grabs and holds on to whatever sauce it’s in.

Grilled Mullet:  A great example of the Roadhouse’s all-too-often overlooked fish specials.  Grilling enhanced the mullet’s flavor, and the fish played well with the nutty and sweet flavors of the pine nut and apricot topping. Perfectly sauteed spinach and roasted veggies rounded out this great plate.

Cornman Farms’ Burger:  This excellent burger has dry-aged beef from Chef Alex’s farm, grilled over oak and served on a Bakehouse Onion roll. Ours came out a proper medium rare; seared and crunchy outside with a warm red-pink center. Zingerman’s house fries are skinny-cut and tend toward the soft side rather than the crunchy side.

Catfish Po’ Boy:  They’ve switched from the too-crusty french baguette to a softer Italian baguette, which is a better texture for the filling and easier to eat.  The catfish po’boy features a  large catfish fillet fried up with a spiced creole cornmeal batter, garnished with heirloom tomato relish and mayo. Tastes as beautiful as it looks, and reasonable people can get a couple meals out of it.

In addition to offering a rotating variety of Zingerman’s Bakehouse cakes and pies and Creamery gelatos, the Roadhouse does some of its own desserts.  (Dessert tip: If you’re looking for a smaller dessert, the kid’s menu features a brownie sundae that is half the size. )

Ari’s Donut Sundae: house-made donut, vanilla gelato, bourbon-caramel sauce, whipped cream, topped with a sprinkle Virginia peanuts and a bright red maraschino cherry. It’s impossible to not smile when this party on a plate arrives at the table. The gelato melts into the hot fresh-made donut, creating a heavenly blend of crispy donut and melting cream.

Butterscotch Puddin’: a staff and customer favorite. Creamy butterscotch with a sprinkle of sea salt that makes this dessert just sing on the tongue. Strong caramel notes give this pudding a depth of flavor that makes boxed pudding a poor, distant cousin.

As we were sitting at the counter on our last visit — we recommend this for food nerds, it’s like a front-row seat at a cooking show —Joe hefted a giant root vegetable displayed there, which was as big as a child’s head and asked if this was what the rutabaga and bacon soup was made out of.  “Yep, they call that kind (of rutabaga) a Gilfeather turnip,” one of the chefs replied, leading to a discussion about the town in Vermont they were “invented” in and its annual turnip festival.  Not only does the Roadhouse have great food, but it’s attracted a staff that’s passionate and knowledgeable about it. We can’t wait to see what they do next.