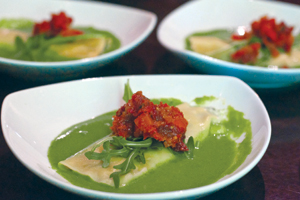 If you haven’t been paying attention to Vinology, it’s time to start. Chef Jim Leonardo and his team are doing complex, modern takes on classical dishes as well as putting things together in unusual, but delicious, combinations. Vinology stands up to its competition in cities like Chicago or New York. It’s taken a while to get there; Leonardo came on board in December 2009, and it’s been a continuous, very intense process to get to where they needed to be.

Vinology’s dishes can be difficult to describe, because there is a lot happening on the plate, and every bite you take can be different — this is by design: “Just as great wine changes in the glass, we want the food to open up, and change, and be more than just one note,” Leonardo says. It’s often important to try to get a bit of each component in a single bite, so that you can fully explore the flavor combinations. Fortunately, the lovely thing with how they are presented is that you can play around and discover what you enjoy the most. And for the most part, they work very well.

Leonardo and his team are passionate about food, but they’re also playful. For example, the rack of veal, which is coated in streusel topping like a dessert: “When we get going in the kitchen, ideas steamroll. Rack of lamb is often coated in breadcrumbs before you bake it.  Why?  For the crunch.  What else would give you crunch, but be more interesting?  Granola, or streusel… what kicks it off is the question ‘Breadcrumbs are good, but what would be better?’” And you can’t assume you know what you’re getting from the name of the dish, because Leonardo enjoys messing with the classics. The Fall menu had a “Chicken and Waffles” dish which was actually a ballotine of chicken topped with several mini-waffles; the Winter menu has some similar plays on familiar dishes.

Incidentally, Vinology only serves bread upon request.  You may want it, because these sauces don’t deserve to go to waste.  And you’ll feel silly licking your plate in a nice restaurant.

Right now, Vinology is running its Winter menu, which will stay in effect until the week of March 20th.

Pork Crepinette: all the tastes and textures of pork in one appetizer. A fried slice of soft pork sausage, with crunchy pork skin, toast with black garlic spread, and apricots as accompaniment. The balance between sweet and salty was flawless; even one of our group who doesn’t like pork much liked this dish.

Sautéed Calamari: a nice switch from the ubiquitous fried calamari served just about everywhere else. Here, it is sautéed and presented with a chorizo risotto and chopped melon, and dressed with a red pepper vinaigrette.

Vitello Tonnato: rather than the usual cold, mayonnaise-based tuna sauce, this dish had veal short ribs, a creamy tuna-based sauce and chopped egg setting it off nicely. Tasting everything together was more important with this dish than with most of the others; taken separately, components could be confusing, but together they were a harmonious and tasty whole.

Roasted Venison Loin: if you think you don't like venison but are open to being persuaded otherwise, try this. It is tender, moist, and the gamey flavor you can sometimes encounter is muted. Served with cheese spaetzle, Brussels sprouts and red wine cabbage, which are quintessential winter flavors, given a twist with the addition of huckleberries and a white peppercorn sauce.

Oxtail Crusted Monkfish: crispy pan-fried monkfish topped with disks of oxtail, accompanied by a mushroom ragout, roasted tomato coulis, and pillowy asiago gnocchi our crew declared “to die for.”  The sweet monkfish contrasts nicely with the oxtail, and the coulis complements it well.

Coq au Vin Rouge: the chicken was prepared as a perfectly slow-roasted ballotine, paired with a spring roll containing the traditional mushrooms, all dressed in a pinot reduction. A lovely mix of flavors and textures, and a fascinating take on a traditional dish. Comfort food for a cold winter's night.

Lamb Osso Bucco: Italian for “bone with a hole,” a reference to the cross section of shank bone used in this dish.  Here, it is braised lamb shank, topped with a mound of parsnip crisps and partnered with a parmesan polenta cake, all surrounded by a rich rosemary-prune glaze. After demolishing the tender lamb, pick up the bone and use your knife to scoop out the juicy marrow.

Squab Wellington: one of the group’s favorite dishes. Puff pastry, enclosing an airline breast of squab, with homemade duck sausage standing in for the pate and duxelles. The squab has an almost red meat-like flavor and richness, and it pairs well with the sweet and sour flavors provided by the cherries, small pickled onions and the date purée.

Roasted Rack of Milk-Fed Veal: easily the hands-down favorite of the entire group. The chops themselves have been coated in an oatmeal streusel, with a duo of contrasting sauces of creamy mustard and vanilla with olive and a demi-glace of miso and maple. Snuggled in with the chops were magically delicious cheese pillows. This is a dish where the sauces marry to create a more delicious whole.

Desserts are on a slightly different rotation from the main menu. These should be available when you go.  (Also consider the Aztec Pave, a spiced chocolate terrine recommended by several friends.)

Winter Creamsickle: probably the most beautiful dessert they have currently; we adored the persimmon sorbet wrapped around the mozzarella di buffala ice cream. The dried fruit and pine nuts complemented the flavors with a sweet flavor and crunchy texture.

Praline Ravioli: a luxurious dish with big flavor.  Three ravioli filled with a chestnut-hazelnut purée, almost Nutella-like in flavor despite the absence of chocolate. The warm malted milk was beautifully rich.

Pain Perdu: it’s hard to go wrong with a dish that is essentially French toast wrapped in a crepe, and this was very good. Served with cinnamon toast ice cream and a touch of bacon, the hot-cold contrast in this dessert was fascinating.