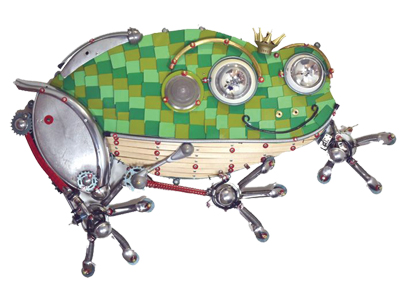 John Schwarz makes big sculptures. Among those familiar with his work, there’s a running joke: If it’s not heavy, John didn’t make it.

“Everything I make is heavy,” he said with a laugh.

Schwarz, 54, has sculpted space men, exotic deep-sea fish and even flying dragons—winged creations reminiscent of Leonardo Da Vinci’s flying machines. The materials he’s used have ranged from golf clubs and old skis to glass bottles and a snow blower. All of which he gathered from garage sales, recycling centers or by walking down the street.

“I’m always looking. I’m always collecting things,” he said.
His latest exhibition—on display at the River Gallery in Chelsea—features a series of robots built from assembled parts, over 90 percent of which is recyclable.

Though his pieces can have a random, chaotic feel, he applies the same discipline and technique he learned studying ceramics in art school, first at Eastern Michigan University and later, for his Master of Fine Art degree, at the University of Michigan. For Schwarz, assembling objects is often no different than a painter deciding which color to select from his pallete.

“You have to think it through. Folks assume you can just put anything together, and you really can’t,” he said.

His passion for machines began at a young age. With a NASA engineer for a father, it was instinctual for him to bolt together incompatible items, learning what looked good and what didn’t—a practice that serves him well to this day. As an avid science fiction fan who found refuge in making art, the seeds for his current mechanical work were planted long ago.

Still, for most of his artistic career, he kept art and machines separate. He stuck with clay, the medium he studied in school. That is, until his wife Patti co-created the River Gallery in 2000 to showcase her husband’s work. Shortly after the gallery opened, Patti turned to John with an unusual request. “We’re going to need some funky stuff,” he remembers her telling him. His response was casual. “Well, I can make funky stuff out of anything,” he recalls saying.

He began bolting and welding objects together, employing skills honed from years of sculpting experience, creating structures befitting a scene from the Star Wars films or the Star Trek television series, both of which he loved as a kid.

From there, pieces began to sell. Soon, he was responsing to requests for his pieces from places as far away as Florida and South Korea. Schwarz did not stop. “I thought, ‘Oh my gosh. I need to keep making these things,’ ” he said.

One piece of his wound up in the Ripley’s Believe or not International Museum. His piece “Reluctant Hero,” which depicts a robot morphing into a flying super hero, found a local home in the University of Michigan Ross School of Business, where the piece has taken on a bit of mythic significance for business students: They touch the sculpture before final exams for good luck.

Had he not switched mediums, he might never have seen this type of notoriety.

“I never would have done this with clay. There’s a potter under every rock between here and San Diego,” he said, adding that though others do similar work with found objects, he distinguishes himself by incorporating clay, maintaining his roots even while constructing metallic, futuristic designs.

“There are a lot of artists who assemble robots with cans and vacuum cleaners,” he said. “The thing that I do differently is I use clay in a lot of mine. I’ll use clay fins for a dinosaur or a fish sculpture.”

Schwarz says one of the hardest obstacles to overcome is the eventual distance between him and the work. After all that time spent scavenging, collecting, assembling, reassembling and deciding, say, which pair of car headlights make the best eyes for a giant-squid sculpture, it can be difficult to let go.

“You have this sense of loss,” he said. “Most of [my sculptures] I’ll never see again. It’s a weird detachment that you go through with art.”