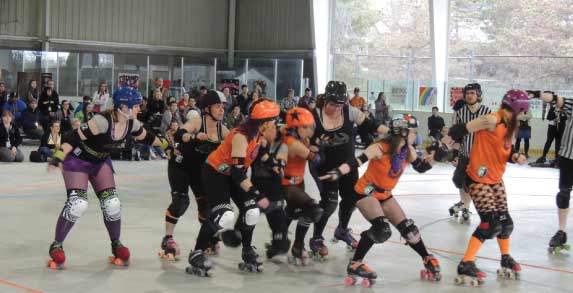 When one thinks of a nonprofit organization, the board members don’t typically have names like Lethal Bo Peep, Loch Ness Mauler, and Helen Killer. But then, The Ann Arbor Derby Dimes (A2D2) are not your typical nonprofit.

A2D2 celebrated its fourth anniversary last month, and now consists of three teams: The Brawlstars, Arbor Bruising Company, and Ypsilanti Vigilantes, becoming a full member of the Women’s Flat Track Derby Association, which supplies the official rules for the league and insurance for players. 2014 has already produced some major milestones for this relatively young organization. According to A2D2 president Scargyle, the Brawlstars have made it into the top 100 teams on Flat Track’s stats page.

For the uninitiated, roller derby is essentially a full-contact race on roller skates. In a jam, the scoring player (jammer) attempts to lap as many opposing players as possible while teammates maneuver aggressively to help clear the way. It’s a rough sport, to be sure. “Injuries are not uncommon,” says Athenya Knocker. “That being said, we take a ton of safety precautions and serious injuries are rare.” 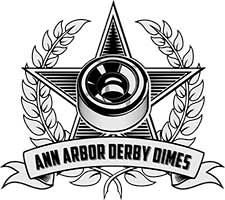 Being a Derby Dime also means having a built-in support group. Teammates on the track are also “teammates in life,” emphasizes Lethal Bo Peep. “There have been several occasions where teammates are down on their luck and we are quick to organize funds, cook meals, give rides to injured players.”

This passion for the sport and for each other makes roller derby fun to watch. Despite (or perhaps evidenced by) the playfully clever noms de guerre and gritty fashion, this sport is something the Derby Dimes take very seriously, devoting time to training, organizing, traveling and promoting. Players include “moms, college students, doctors, bartenders” says Athenya Knocker, but what they all have in common is strength and determination. Mental fortitude plays just as important a role as physical strength, and the empowering nature and sense of community are rewarding. “There is a reason why ‘Roller derby saved my soul’ is such a popular quote.” Our bouts are fun for all ages and a great community event. Kids under 12 are free with a paying adult and they might just make some new role models.”

There are other ways to become involved. Referees strap on skates and are in the thick of the mayhem during the jams. For those who want to help out, but don’t care for the bruises, the group needs non-skating officials (NSOs) and volunteers to help with bout production.

For the truly dedicated, joining the Ann Arbor Derby Dimes doesn’t even require skating experience. Regardless of skill level, size, age, or what sort of shape you think you’re in, A2D2 will take you in and train you as “Fresh Meat.”

The full season schedule, as well as lots of other information about the organization, the sport and the players, can be found at a2derbydimes.org