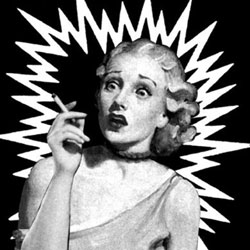 Cannabis, known in criminal statuettes as marihuana, is a weed. And like a weed, Michigan state legislators have had a hard time eradicating the stubborn plant from public debate. Cannabis, throughout history, has alternately been hailed as a gift from the divine, used as a common remedy, demonized as a plague to society, symbolized for a rebellious counterculture and praised for being a life saver.

On November 6, 2012 nearly 60 percent of voters in Grand Rapids, Michigan approved a charter amendment reducing the ramifications for possession of marijuana in quantities up to 2.5 ounces from a misdemeanor conviction to a civil infraction punishable by a $25 fine. The amendment, Proposal 2, is based verbatim on similar legislation which was passed in Ann Arbor in the 1970s. Proposal 2 joins several other local and state initiatives which have been passed across the country to ease the strictness of marijuana laws. Most notably perhaps, Colorado and Washington became the first states to legalize pot for recreational use. However, Colorado’s Governor John Hickenlooper said in a memorable quip, “Don’t break out the Cheetos or Goldfish too quickly.”

On December 6, 2012, two days before Grand Rapids’ Proposal 2 was to take effect, the Kent County prosecutor filed a lawsuit enjoining the measure. One of the problems is the charter amendment does not comply with state laws. The law includes a provision prohibiting Grand Rapids police or city attorneys from reporting cases to county prosecutors and other state officials. A brief filed by the Kent County Prosecuting Attorney argues that the City of Grand Rapids “has no right to interfere with state law governing criminal penalties for the possession, use, control or gift of marijuana” as well as “no right to interfere with the constitutional prerogatives of the Kent County Prosecuting Attorney,” which is to enforce the state laws.

Adding confusion, state laws are not compatible with federal statuettes. Although these pro-pot victories may be an indicator of a growing push for more states to decriminalize the possession and use of limited quantities of cannabis, the current laws have left the average American who is looking to legally spark a jay, as well as law enforcement and the medical community up in smoke. 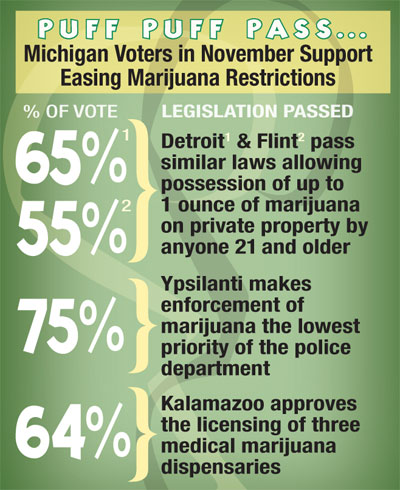 Michigan has a complicated relationship with marijuana. The state government has different penalties for possession and use – allowing patients who are prescribed medical marijuana to obtain registered cards, authorizing legal possession, while licensing caregivers to cultivate the plants for these patients. Police departments and other law enforcement officials are handcuffed, as they take an oath not only to enforce the laws of their jurisdiction, but also the laws of the state.

Also, according to Michigan’s Home Rule City Act, a city cannot pass an ordinance that creates a civil infraction for activity classified as crimes under the Public Health Act or which is punishable by more than 90 days in jail. GR’s Prop 2 complies by being a “charter amendment” not a city “ordinance.” To the Kent County prosecutor there is no difference — “The City cannot circumvent the policy of the state by arguing that they aren’t really adopting a city ordinance, but only a charter amendment that has the precise effect a city ordinance would have. Call it a charter amendment; call it an ordinance; by any other name, it smells the same. Shakespeare, Romeo & Juliet, Act II, scene 2.”

The matter is even more complicated because, under federal law, marijuana is a Schedule 1 controlled substance, meaning it has no legalized medical application and is considered on par with the dangers of drugs like heroin. The Office of National Drug Control Policy’s website states, “there is no such thing as ‘medical’ marijuana under federal law.” Enforcement of federal law resides with the individual who occupies the oval office and the nation’s appointed attorney general.

The Obama administration and Attorney General Eric Holder have been clear that enforcing federal laws in states in which marijuana is legal for medical use or has been otherwise decriminalized is a low priority. But despite the shifting public opinion made clear by recent voter initiatives from coast to coast, Obama still perpetuates the ambiguity of the matter. “I head up the executive branch; we’re supposed to be carrying out laws. And so what we’re going to need to have is a conversation about, How do you reconcile a federal law that still says marijuana is a federal offense and state laws that say that it’s legal?” he told ABC News’ Barbara Walters in December 2012.

Since the availability of marijuana in Michigan for medical purposes was passed by a state-wide vote in 2008, there have been a number of legal hurdles which have made obtaining and using the prescribed substance difficult. The main dilemma is the legality of medical marijuana dispensaries and patient-to-patient sales. Several establishments across the state are operating while a handful of others have been raided and/or have voluntarily shut down. In 2011 the Michigan Court of Appeals ruled that commercial transfers between patients are illegal and the Michigan Medical Marijuana Act of 2008 (MMMA) did not include language allowing dispensaries. The case has now reached the Michigan Supreme Court, which heard arguments in October 2012 and, as of press time, has yet to release a decision. Despite the pending ruling, in November voters in Kalamazoo approved licensing three dispensaries in the city.

The climate concerning decriminalization of marijuana in the Wolverine State lingers in a smokey haze. Even as major court rulings interpret the current laws, there is a push to place issues concerning decriminalization and ‘lowest law enforcement priority initiatives’ on the 2013 ballot in Jackson, Traverse City, Mt. Clemens and Lansing. In the state capital, amidst a heavy political climate where a Republican-controlled state government is dealing with union issues and dire budget concerns, the decriminalization movement has grown more potent.

“It’s more than just a marijuana issue,” says Michael Tuffelmire, Director of DecriminalizeGR, one of the organizations that helped push Prop 2 in Grand Rapids. Tuffelmire says proponents respect the state laws, but on the heels of an economic recession cities are forced to prioritize their spending. “People here, like all over the midwest, are going through tough times. The city spends too much busting users like college students. Now they’re spending even more money to fight in court what was passed by the voters of the city.”

Michael R. Abel, a criminal defense lawyer in Detroit and executive director of the Michigan Branch of NORML (National Organization for the Reform of Marijuana Laws) is more blunt in his assessment of pot politics in Michigan. “We really don’t have much of a representative democracy anymore,” he says. He points out that at the end of the lame duck session of state congress which saw the “Right to Work” laws pass in the middle of the night, the legislature also pushed through six new amendments to the MMMA. “These guys
don’t give a shit about democracy, fairness, openness or transparency.”

Abel, along with others who backed the decriminalization initiatives in the 2012 elections, figures the best way to make the state legislature notice the growing public tolerance for pot is to get the votes city by city. “There are people who think they can convince the House and the Senate to pass decriminalization, and I think that’s highly unlikely unless we get a bunch of new representatives in there…The legislature is more conservative than the people of Michigan, so we have a real problem. Luckily we have the initiative process, and its going to have to be a voter initiative ( placed on the statewide ballot), probably in 2016.”

The only thing that seems clear is that weed won’t go away in Michigan and, if the growing trend continues, to bridge the gap to decriminalize possession and personal use will require an official with legal authority to take the hit instead of passing on grass.

“If legislators are paying attention, it’s pretty clear what the will of the voters is.” says Abel, “As my friend John Sinclair says, ‘marijuana prohibition is over, the government just hasn’t realized it yet.’”