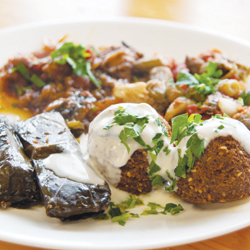 Kibbeh footballs, enrobed in a thick, creamy red pepper-walnut sauce.  “Nobody has this in the United States, except us.” Exotic Bakeries’ red pepper kibbeh is unique and fabulous. It alone would be reason to seek out this restaurant, tucked away in a strip mall near North Campus.  But they also have a number of other dishes you won’t find at other Middle Eastern restaurants around here: most area Middle Eastern restaurants are Lebanese, while Exotic Bakeries is Syrian.  Even more, they focus on home cooking, serving local dishes from their hometown and other areas, which might not be available even at other Syrian restaurants.

Natives of Jisr ash-Shughur, which has suffered much in the current Syrian Civil War, Jinan and Monib el-Khatib didn’t come to Michigan to be restaurateurs. Monib came to get his master’s in urban planning at Eastern, and Jinan, who has formal culinary training including as a French pastry chef, had followed him over. But the economy wasn’t kind, and in 1990, they opened in their current location. They still have the fancy cakes and pastries with a Middle Eastern flair that drive the “Bakery” part of the name (the “Exotic” part is actually a reference to “exotic rivers,” the focus of Monib’s master’s thesis!), but Syrian food has become a major part of their business.

It’s no surprise, really, that Syrian cuisine is so varied: it’s been a trade crossroads for millennia.  Wherever that happens, you find complexity and innovation as differing culinary traditions meet.  What was a bit surprising is how localized Syrian food has apparently remained.  You really don’t see that red pepper kibbeh (or the red pepper sfeeha) anywhere besides Jisr ash-Shughur.  On the beet babaganoug, Monib commented “All my life, I had never seen this dish, until we visited my sister in law who lives 40 miles away from where we grew up.”  Here, though, the el-Khatibs have collected a number of these dishes for your pleasure.  (Jinan has also written a cookbook, available on DVD-R.)

Pretty much anything in the case can be wrapped up in a pita-bread sandwich, or you can get a combo plate of three items. The menu on the wall lists suggested combinations, but you can make your own. Combo plates are generously sized portions, and smaller appetites will have leftovers. Individual items are also sold by weight or piece, and they’re happy to give taste samples where it’s practical.

Vegetarian
Ajjeh – Eggs, parsley, onions and spices baked into a light spongy custard-like “cake,” kind of like a vegetable souffle.  Pleasantly savory on its own, but you can add a thin layer of garlic sauce to the top for a kick. This is one of our personal favorites.

Beet Babaganoug – Steamed beets pureed with tahini, yogurt, garlic, and lemon. The yogurt plus lemon and tahini mellow the strong earthy flavors of the beet enough that even people who are only iffy on beets may enjoy dipping their pita in this surreally bright pink spread.

Damascus Lentils – A regional specialty of Damascus, as the name suggests, lentils and pasta are seasoned with lemon and cilantro and topped with crispy pita bits. Pomegranate molasses adds an unexpected sweet note.

Makmoor – Eggplant baked until soft, then sauteed with onion, tomato, garlic, and mint The spicing delicate. The eggplant is smooth and creamy with rich tomato flavor. Delicious!

Okra – We’d hazard a guess that up here in Michigan, a good portion of the population doesn’t like okra. But here, the okra pieces are firm and not slimy, and the tomatoes give the dish a lovely rich savory flavor. Okra lovers will be happy, and as for everyone else… go with an okra-loving friend and try a bite.

Red Pepper S’feena – A Jisr ash-Shughur specialty, this is a round of flat bread spread with sauce made from red bell pepper, walnuts, onions, olive oil and spices and then baked.  The red pepper has a light fruity flavor, and the walnuts are a great addition. A great fast to-go item that you can microwave or put in a toaster oven later.

Spinach Divine – Spinach cooked down with onions and garlic until it has a creamy texture. Lemon brightens it up, while the roasted garlic adds mellow depth. Topped with walnuts and fried onions.

Meat
Chicken Cheese Round – Chicken and feta cheese seasoned with lemon, sumac, baked in bread. This plus some hummus went over well with the young child in our group.

Oozee – Almost soft-ball sized puff pastry stuffed with a mild mix rice, peas, and beef seasoned with allspice and cinnamon. Very comforting food. A bit oily when reheated, but oh-so-delicious. One of Lisa’s favorites, and a Damascus regional dish.

Pastilla – Chicken, onion, parsley, almonds, and eggs seasoned with saffron and cardamom. When fresh out of the oven, this is divine. Puff pastry does suffer a bit if microwaved. Consider taking some to-go and reheating in a toaster oven.

Red Pepper Kibbeh – Fruity-savory-creamy (but no dairy) red pepper-walnut sauce draped over a ground beef filled bulgur shell (aka “kibbe dough”).  Wow!  For years this has been Joe’s favorite dish at Exotic Bakeries. Hands down, this was the table favorite.  The other Jisr ash-Shughur dish on the menu.

Desserts
Date Mahmoul – One of the less sweet items in her case. Perfect for those who like just a touch of sweet. Dense cookie shell and date filling work well together. Lisa’s favorite. The pistachio and walnut versions are dusted in confectioners sugar.

Syrian Rice Pudding – Unusual whipped texture takes this rice pudding to a whole new level. Delicate, light, sweet, heavenly, or as one of our group put it, “It’s the bomb.” Even if you don’t normally like rice pudding, this is worth trying.

Orange Truffle – Chocolate and coconut wrapped around a center of soft ganache flavored with some candied orange zest. Very good.