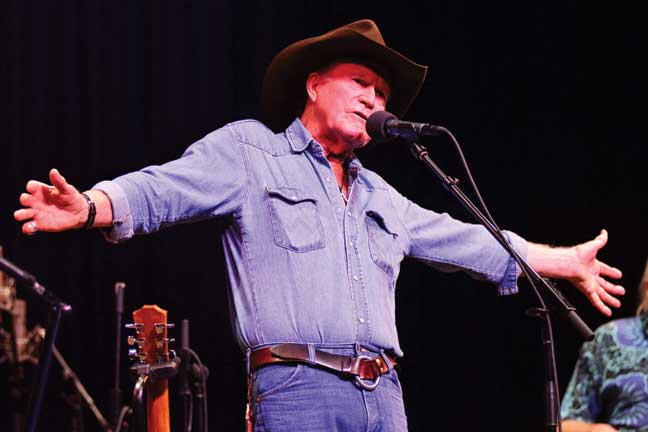 “Just be honest,” says country musician Billy Joe Shaver. “If you’re honest, you’ll be different. And if you’re different, you’ll be good.” The 75-year-old speaks from experience. From driving Nashville’s country music renaissance in the early seventies to performing at the Grand Ole Opry in 1999, Shaver has forged a career of showmanship and songwriting that will be displayed at The Ark on Saturday, July 5th.

“I’m a songwriter at heart,” Shaver says. “God blessed me with [the ability] and I’ve done the best I can with it,”  writing entire albums for both Waylon Jennings and Willie Nelson—his record for Jennings, Honky Tonk Heroes, reinvigorated the Nashville country music scene when it was released in 1973. “It changed everything around town,” Shaver recounts. “Everybody started wearing blue jeans, whereas before you couldn’t get into some of the clubs without wearing a tie. It all changed. [There were] mostly rock ‘n’ roll clubs around Nashville, not country. Everything changed.”

The album galvanized country music by way of a new subgenre, so-called outlaw country. “I guess for lack of anything else to call it,” Shaver says with a chuckle. “Really more like outcast.” Despite the label, his songs began appearing on albums of legendary musicians like Kris Kristofferson, Patty Loveless, Elvis Presley and Bob Dylan. “To me, that’s the greatest gift on earth—for someone to care enough about what you wrote down, and the art that you put forth, to take it and make it their own,” Shaver says. “Just about everybody recorded my songs, so I’m indebted. I’m just happy to be in it.”

This summer Shaver and company set out on a twenty-seven show tour, playing from Texas to New York. “We go up and down the road in a fifteen-passenger van. We tried the bus for about a month; it didn’t work. We share time driving, the four of us. We sell out these little places we’re playing, sometimes we get a big one and we sell it out, too. Long as I got enough money to get to the next gig, I figure I’m alright,” he half jokes. Shaver’s shows inspire memories of bygone days when good music filled small country haunts not sponsored by major automobile brands or cable TV providers. Backed by a proficient power trio, Shaver wins over crowds with his signature blend of rip-roaring country songs and flippant banter. And you can count on hearing the hits like “Ride Me Down Easy,” “Old Chunk of Coal,” “When Fallen Angels Fly,” “Old Five & Dimers Like Me” and “Georgia on a Fast Train.” “I have to do ‘em,” he says, “because they just keep hollering for ‘em and they ain’t gonna quit till you do,” Shaver says gleefully.

But if you’ve seen him before, don’t hesitate to line up outside The Ark one more time. “It’s a different crowd every night—different chemistry—and it’s all new to me. It’s fun. That’s what makes a good show: a good audience,” he says. It will likely be worth the trip just to hear him talk about the old days. From his time with Willie and Waylon to the “same girl I married three different times,” Shaver uses his frank, lyrical anecdotes to bring his colorful past to life. But regarding the future, he speaks only of the road: “I like everything about it. As long as I got my legs under me, ain’t nothing gonna stop me.”