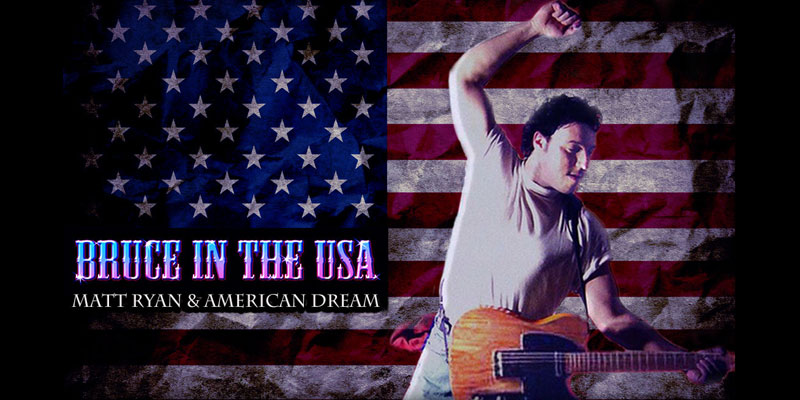 High school nicknames don’t usually stick after graduation, but for Matt Ryan, who performs at The Ark on June 30, a running joke with his friends became his career.

“I was nicknamed ‘The Boss,’ and I didn’t like it,” Ryan said in a phone interview with Current. “I wrote a lot of music, had my own bands and a lot of recording projects in Canada … And no matter how long or short my hair was, it always came down to, ‘You know who you look like? You know who you sound like?’ ”

Yes, Ryan’s voice and appearance bore an uncanny resemblance to Bruce Springsteen, and they garnered him a reputation beyond just his home country. Towards the end of the ’90s, he got a call from a Las Vegas producer of “Legends in Concert,” a show that starred impersonators of the most famous musicians in the world. However, Ryan initially turned them down.

“I didn’t understand at the time that it was the longest running show on the strip, and it was a big Vegas show,” Ryan said. “So I said no, and the calls just kept coming.”

Eventually, Ryan decided that the time was right, to give performing in Vegas as “Bruce Springsteen” a try. Now he serves as leader of a tribute band that tours nationwide: Bruce in the USA, which makes its first-ever stop in Ann Arbor at the end of the month.

Ryan hasn’t been devoted to Springsteen all his life. He loved The Boss’s radio hits when he was growing up, but he admits to not having been a hardcore obsessive.

However, Ryan has now spent years entertaining Bruce Springsteen’s biggest fans, experiencing and growing to understand what he calls an “almost religious, deep thing that’s attached to this massive library of genius writing.” Now in his fifth decade of performing, Bruce Springsteen’s appeal crosses generations and commands a fan-base to rival any artist in the world.

Ryan knows that those who love Springsteen might be a little skeptical of a Canadian from Vegas performing as The Boss, and he makes sure to reach out to fans who love the b-sides as much as Thunder Road. While every Bruce in the USA show is packed with classic hits, Ryan says that the band has over five hours’ worth of songs prepared, and they make sure to include a few deep cuts on each setlist so the hardcore fans can be happy too.

“Immediately they need to know that you understand it, and then it’s ok to like (the show),” Ryan said.

As a performer of Springsteen’s music for over 15 years, Ryan speaks with a real appreciation and understanding of the songs. They’re both challenging and a lot of fun for musicians. And the effect it has on fans is amazing.

“You can have 1,000 of them drunk, drunker than any crowd on the planet, and we won’t need security. It’s all just love and happiness,” Ryan said.

Today though, Ryan stresses that there’s a separation between the Springsteen character and his everyday self — unlike the popular image of Elvis impersonators walking through grocery aisles in Vegas.

“There are a lot of people out there that are basically living it day by day, like it’s some sort of psyche that some people associate to this business,” he said. “So it was really important for me to walk into New York and places like that and let people know immediately that it’s not in first person with Bruce in the USA. I flirt around it. They need to know that there’s a separation here. Although it’s an act, it ends when we walk off the stage.”

But to really be “The Boss” onstage, Ryan has to embrace the sincerity and emotional honesty that fills all of Springsteen’s songs. He wants the audience to be able to close their eyes and hear Bruce.

“When you’re delivering these lyrics, it’s really important that it can’t be an act,” Ryan said. “You really truly have to understand these songs. They’ve got to be inside you.”

Springsteen’s music is beloved not because he was a fashion icon or had flashy music videos, but because there’s a lot of deep truth and powerful meaning to his songs. Without a costume or wig or anything to hide behind, Ryan knows that these shows live and die on how well he knows the music and the feelings behind it.

“You either understand what you’re singing and embrace it, or it’s cheese,” he said.

So Bruce in the USA isn’t just the novelty of a guy who looks like Springsteen singing hits from the ’70s and ’80s. It’s what Ryan calls a celebration of the songs and memories of Bruce and the E Street band. Ryan’s got a loud, seven-piece that includes other E Street characters like Clarence Clemons and Steven Van Zandt, and they all do it live, with no backing tracks.

“For a musician that’s used to cashing a check,” Ryan said, “There’s something a lot more going on here that keeps us all engaged and glued to this thing.”

And although he’s been playing musical and performing as Bruce for a long time, the energy from these shows keeps Ryan going. And, at 49-years-old, Ryan is almost 20 years younger than the man himself.

“He’s giving me inspiration, and to be honest I’m feeling very young. There’s something about doing this for a living that kicks your ass into shape.” Ryan said. “It’s cleansing, like running a marathon kind of cleansing.”