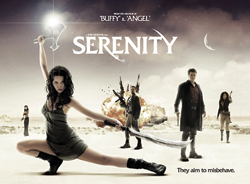 Joss Whedon, creator of Buffy The Vampire Slayer and director of The Avengers hasn't always had the easiest career—in 2002, he created Firefly, a space opera TV series for Fox.

The series told the story of a motley crew of space cowboys making a living on victimless crime after fighting on the losing side of an interplanetary civil war. Melding social commentary, grit and whimsy, the show was absolutely brilliant, garnering a feverish fan base… of course Fox cancelled it after one season.

Do yourself a favor—binge on this cult-classic series on Netflix, and then show up to The State Theater for a Midnight screening that will take you into deep space!