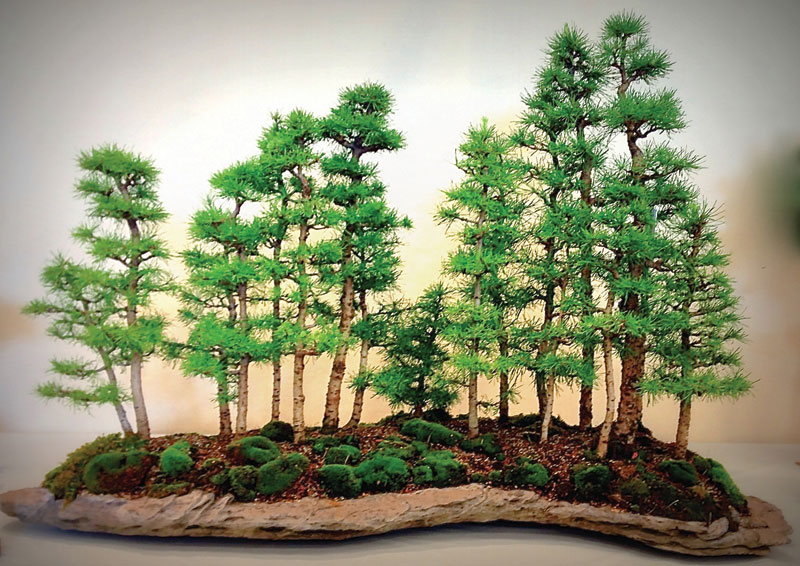 Trees are an integral and beloved part of Ann Arbor’s identity, from the stand of oaks that inspired the city’s name, to the maples that dot our yards and parks, to the willows edging the Huron River. Some of Tree Town’s smaller, more inspiring trees will be out for our enjoyment at the 43rd Annual Ann Arbor Bonsai Society Show. In order to help you better appreciate all the bonsai on display, here’s some insight into the history, art, and practice of this horticultural tradition.

The cultivation of miniature trees in containers spans oceans and millennia. The earliest pictorial recording of the practice was inscribed in 706 A.D. on the wall of a tomb belonging to a Chinese prince; the image depicts two servants holding pots of dwarfed fruit trees and rocks. The tradition is believed to have traveled to Japan via embassy personnel of the Japanese Imperial court and Japanese Buddhist students, who carried home the tiny potted landscapes, or penjing, as souvenirs. The Chinese word penjing translates to “container scenery.” And ancient Chinese practitioners of penjing endeavored to create evocative, ideal worlds using many elements, including rocks, water, grass, and figurines of people, animals, and architecture, in addition to trees and soil.

No fad, penjing became an art among medieval Japanese elite, who, over centuries, developed a set of aesthetic principles. The philosophy of Zen Buddhism influenced penjing as figurines disappeared from pots in favor of a simplified landscape. Gradually, the Chinese penjing developed its own Japanese cultural identity as bonsai—from the Japanese words bon, meaning “tree” or “planting,” and sai, meaning “pot” or “tray.” Like penjing in China, bonsai was too compelling an art to be contained within Japan. In the 19th and 20th centuries, bonsai began to spread around the world by means of international exhibitions and fairs, export nurseries, Japanese immigrants, and U.S. military and civilian personnel stationed in Japan following WWII.

Bonsai can range from a single tree to many, and individual trees can be further sub-categorized according to the posture of the trunk. The formal upright style is characterized by a straight, tapered trunk, while an informal upright bonsai has a somewhat curved trunk that still places the tree’s apex directly above the trunk base. In the slant style, the trunk—you guessed it—slants, emerging from the soil at an angle, with the apex located to the right or left of the trunk base. And then there are those bonsai that seem to pour out of their containers, whose sinuous trunks exemplify the cascade or semi-cascade style.

Bonsai styles are intended to reflect and illuminate relationships between powerful, and, at times, opposing forces: trees, wind, sunlight, soil, seasons, and people. The formal upright style represents a strong tree whose growth is unimpeded. In the other styles, a bent or meandering trunk represents adversity or displacement, suggesting a tree beset by wind or shadowed by another object. “Bonsai should be seen as a representation of a tree, a tree we remember from our childhood or a tree seen on the shore at the Bruce Peninsula last summer, and not a perfectly formed miniature tree,” says Ann Arbor Bonsai Society vice president Paul Kulesa.

According to Kulesa, bonsai growers attempt to emulate a tree’s growth in nature, but on a much simpler scale. Whereas a pine tree in the Arboretum might have hundreds of branches, a pine trained as a bonsai might possess only a dozen or so branches. In order to maintain a bonsai’s shape and size, growers use a variety of techniques, including pruning of limbs, trunk, and roots, trimming of leaves and needles, wiring of branches, and grafting. “It has taken me nearly twenty years to understand that straight bonsai trunks are often boring,” says Kulesa, who is currently tending more than 100 bonsai. “In an urban environment what else do you see? Trees found in our parks and on the berm are nursery-developed to stand tall and straight. Movement of the trunk, even the slightest change of direction, is easy to see and creates interest in that bonsai.”

A beautiful bonsai takes years to grow and requires a deep understanding of horticulture. And a good grower knows when not to work on a tree. Techniques like wiring the trunk or cutting branches take a big toll, says Carmen Leskoviansky, a Bonsai Society member and Collections and Natural Areas Specialist for Matthaei. “If heavy work is needed on a tree, it’s best to let it sit for a year and build up energy reserves,” says Carmen. “It’s all about the balance of keeping a happy, healthy tree.”

Whether you have an interest in bonsai or simply love trees, there will be plenty of these miniature specimens to contemplate and enjoy.