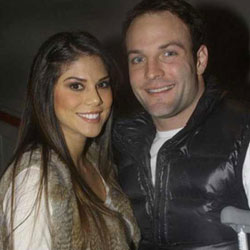 “Proud of my husband and the Pats,” Welker wrote. “By the way, if anyone is bored, please go to Ray Lewis’ Wikipedia page. 6 kids 4 wives. Acquitted for murder. Paid a family off. Yay. What a hall of fame player! A true role model!”

Unfortunately for Mr. Welker, his team is not going to the Super Bowl and his wife uses Facebook like a high school cheerleader.

Leave it to Buzzfeed to give us yet another fantastic Beyonce list. Its the “22 Most Fabulous Beyonce Moments of the Inauguration.”

In other NFL News…

Despite the spotlight on Harbaugh vs. Harbaugh in the upcoming Super Bowl, another NFL coach is gearing up for his own big day. NFL Commissioner Roger Goodell reinstated New Orleans Saints’ head coach Sean Payton after a season-long suspension. Payton was penalized following the NFL’s bounty investigation in early 2012 when they concluded that monetary incentives for causing “cart-offs” is generally frowned upon.

Detroit Red Wings’ new guy Jordin Tootoo and Columbus Blue Jackets’ tough guy Jared Boll reminded the crowd at Nationwide Arena in Columbus Monday night why they really came to the game when they don’t know a penalty kill from a slap shot–sometimes fights start 3 seconds into the first period.