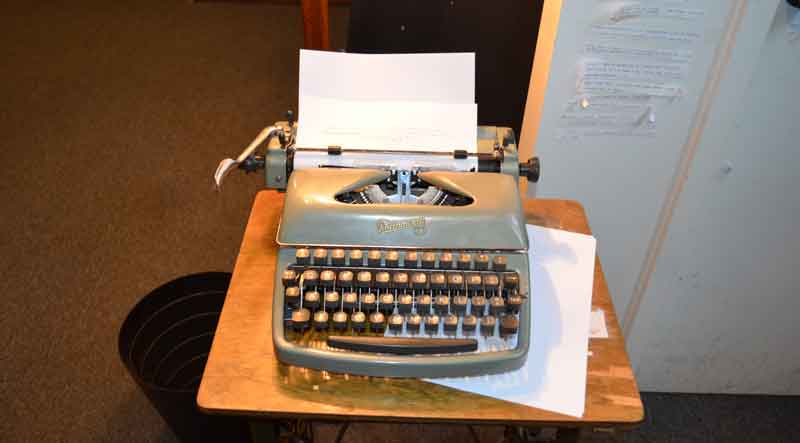 “Thanks 4 such a beautiful shop!”

“Do you know how loved you are?”

Customers venturing into Literati’s basement will first find a typewriter and the thoughts of some grateful, philosophical, and occasionally silly customers, taped to the wall above it.

The different messages delight co-owner Mike Gustafson. “The typewriter is the world’s smallest, most efficient publishing house. Everything is in real time.” And, because he switches out each full sheet, he adds, “There’s at least one person reading everything.”

For Gustafson and his partner Hilary Lowe, it’s hard to say where the idea for the typewriter came from. However, it’s supported by his personal typewriter collection – “I have 15 or 20” he says, mostly from Kiwanis and Treasure Mart – and he believes it fits in with the store.

“A different process happens when you type on the typewriter. When your key hits the page, you have to be very sure of yourself. There’s a similar notion behind an independent bookstore of our size. We have to curate carefully and respond to community needs.”

Literati is now on their third or fourth typewriter, and Gustafson has more than his share of stories.

“We’ve had two people propose on the typewriter. They both said yes.”

Logan and the Violin Monster also arranged their eventual meeting on the typewriter.

Kids like Logan are some of the typewriters biggest fans, Gustafson says, and he loves seeing parents and grandparents introduce them to the technology. He adds, “It’s heavily used by a lot of people who’ve never used a typewriter before, which is the point.”

When repairs are inevitably needed, Gustafson is happy to step in. “As far as I can tell, there are no longer any typewriter repair shops in Michigan, so I’ve tried to do as much as I can myself.”

And when it’s not fixable? “It just gives me an excuse to find the next one.”

But customers are typically respectful when it comes to the machines and what they write on them, and Gustafson emphasizes that he and Lowe value customers’ contributions. They rarely remove messages.

“I like the typewriter to be a mirror of our customers, and I want it to be as accurate as possible,” he says. “We’re a community space. Having people come in and have fun is great.”