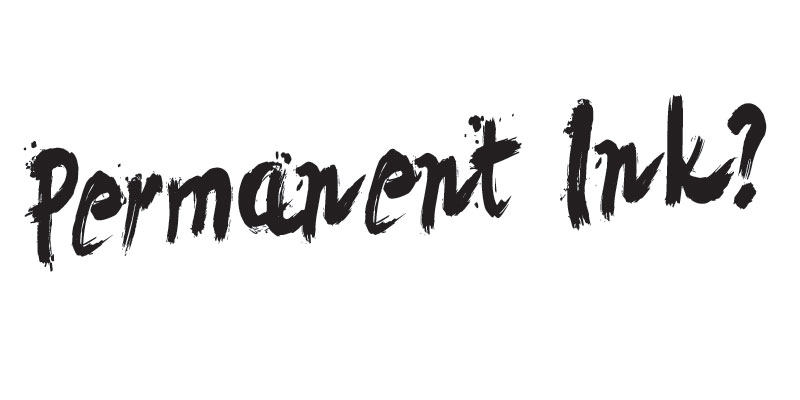 Tattoos and regrets in the age of lasers

I’ve never inked anyone’s name into my skin, but I do have plenty of tattoos (not to mention plenty of regrets, only some of which are tattoo-related). Still, I’ve always considered tattoo removal to be kind of, well, cheating—which is also to say, I’ve never really considered it, despite the tramp stamp I got as a teenager and a series of terrible decisions I made in Fiji.

But with Valentine’s Day around the corner, I’ve found myself wondering about the process behind all those faded names and empty hearts, and about its implications for the craft and culture of tattooing. Without the specter of permanence, do tattoos lose their power? What’s the meaning of “forever” if we can always change our minds? 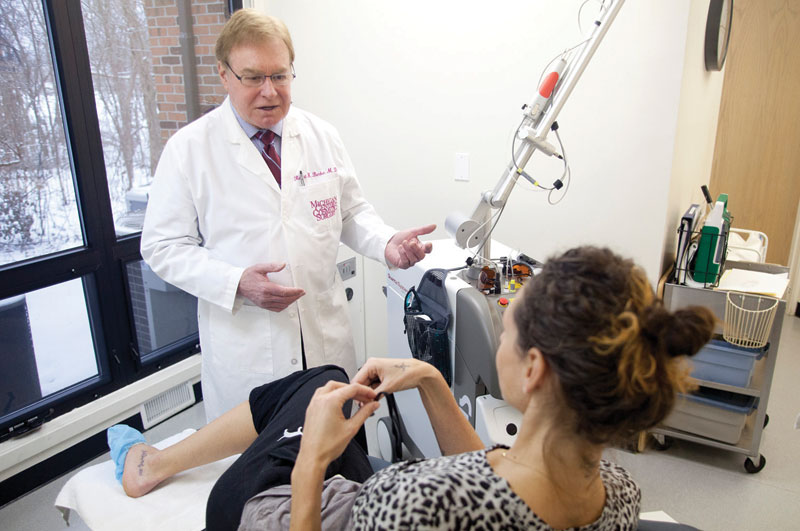 For Dr. Robert Burke, founder and director of the Michigan Center for Cosmetic Surgery, the conundra associated with tattoo removal are more physical than philosophical. A case in point: Dr. Burke has a friend, “a world expert on ink,” who owns a chain of shops that offer both tattooing and tattoo removal. As a tattooee, I’m skeptical. But from a dermatological perspective, I learn, there is much to be gained from a partnership between the guys in charge of putting the ink on your skin and the guys in charge of lasering it off.

The issue, Dr. Burke explains, is that many ink blends are proprietary, so the exact composition of a certain color is often inscrutable to the laser guys. This matters because the efficacy of the removal process is greatly increased by targeting individual chromophores—“Because of physics,” Dr. Burke adds helpfully, having accurately assessed my level of scientific understanding. The better lasers have multiple wavelengths, each calibrated to zap a particular chromatic spectrum.

Dr. Burke speaks, with near-religious reverence, of the Quanta Plus C, which according to him is “the best laser in the world”—a claim corroborated on the QuantaUSA website, which brags that the laser has also been used to restore “countless frescoes, bronzes, monuments and statues” in such venerable institutions as the Vatican Museum; NASA is apparently taking a Quanta Plus C to Mars. 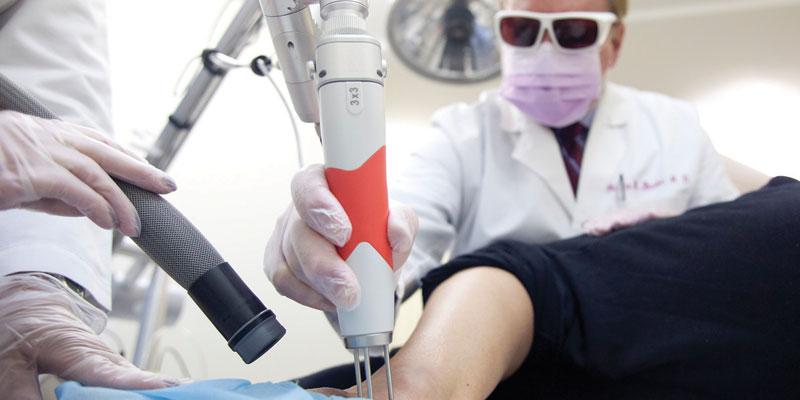 Here on earth, Dr. Burke uses the Quanta Plus C for its more quotidian purposes, such as removing small tree frogs from the ankles of the no longer young. He shows me some videos on his iPhone, narrating: “This red light is the aiming beam…the three prongs keep the laser at the right distance…that’s a cooling device, to keep the patient comfortable…okay, here we go…”

The laser comes to life, beeping and ticking over the black outline of the tree frog. I’m amazed by how quickly the black ink dulls to pencil-gray; the orange body of the frog, immune to this wavelength, remains untouched. “It’s like Photoshop!” I exclaim. Dr. Burke chuckles. On screen, his disembodied hands swap the wrong laser for the right one, and the orange obediently fades.

Dr. Burke’s delight in his work is contagious, and I find myself rooting for the removal. Maybe mistakes can be undone, no matter how much time has passed, no matter how deep the scar. Maybe all it takes is finding the right laser—precision-targeting regrets with a skilled psychoanalyst, instead of, say, binge drinking and denial.

I wonder aloud if removing tattoos, like getting them, is considered addictive.

“Well, a lot of clients end up having other procedures done,” Dr. Burke responds thoughtfully. “That’s what they talk to me about while we’re doing tattoo treatment. They say, I just had a child, I want to get my body back, what can I do? Or they say, I’ve got this scar here, or…”

Is tattoo removal a corrective procedure, in roughly the same category as other cosmetic surgeries? Is there a difference between adding and subtracting, breast augmentation and liposuction, getting a tattoo and getting one removed? Is the Quanta Plus C a tool of restoration or destruction? Is Dr. Burke returning the body to its original pure-skinned splendor, or scrubbing Michelangelo off the Sistine Chapel?

I’ve asked similar questions of less visible regrets, the ones whose names are only figuratively tattooed on my skin. Healing is restorative, additive, an augmentation. But forgetting is destructive, a loss. Does one always require the other? 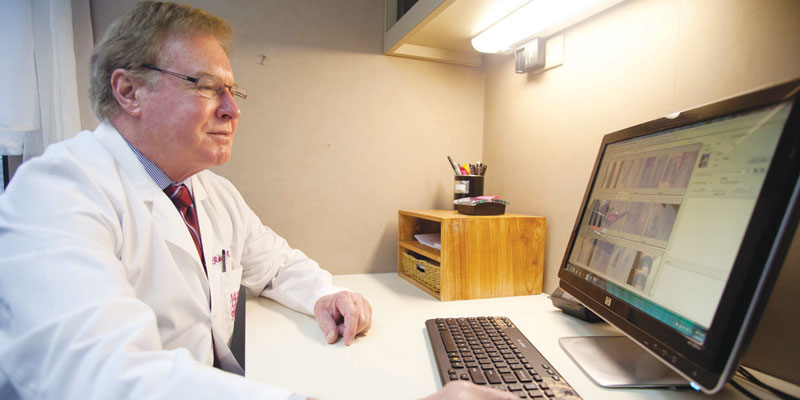 In Eternal Sunshine of the Spotless Mind, Jim Carrey and Kate Winslet play a pair of estranged lovers who pay to have their memories of each other erased by a company called Lacuna, Inc. Spoiler alert: they regret this decision, and spend most of the movie trying to reverse it. Oh, and they end up back together anyway, basically agreeing to do the whole thing over again, heartache and all.

There is no Lacuna, Inc, at least not yet. Dr. Burke can’t erase the brain, only the body. But the body is no ordinary canvas. It changes, ages, and eventually dies. No idea, no image, no decision—nothing in the brain outlasts the body, not even regret.

Some fear of death is universal to our species, but perhaps specific to American culture is our even greater fear of getting old. If the associated industries are any indication, this is a strongly visual fear; we are rabid consumers of cosmetics, surgeries, clothing lines and diets that offer no biological benefits except to make us look younger, to regress the visual body and prolong the illusion of youth.

Tattoos threaten to derail these efforts to regress, on the one hand because they change and on the other because they don’t. They age with the body, fading and stretching and going out of fashion. And they also stay the same, inalterable, indelible, perhaps concealed but rarely completely erased.

“All photographs are memento mori,” writes Susan Sontag in her famous essay on another visual medium. “To take a photograph is to participate in another person’s (or thing’s) mortality, vulnerability, mutability. Precisely by slicing out this moment and freezing it, all photographs testify to time’s relentless melt.”

Tattoos, like photographs, send mixed signals about permanence and impermanence: do our choices matter because we have to live with them forever? Or does nothing matter, because “forever” is only as long as we live? 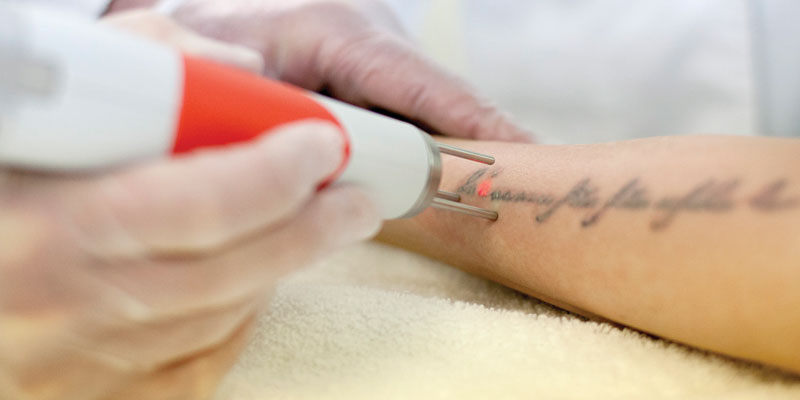 Before I leave his office, Dr. Burke tells me about a new tattoo ink that can supposedly be removed in a single laser session. “But the tattoo artists that I know won’t use it,” he adds with a shrug.

“Yeah, you hear that stuff all the time,” says Jeff Zuck, owner of Name Brand Tattoo, “I mean, there’s all kind of crazy things. Tattoos that would somehow react to electromagnetism—so you could shift the particles, change their shape and color. So you could have a dragon today, a tiger tomorrow.”

He pauses, then echoes Dr. Burke’s shrug. “But I really don’t care anything about it,” Zuck says, “Because I’m a tattooer. And tattoo means to mark the skin. It’s a permanent mark. And to move away from that…it’s moving away from the original idea of what a tattoo is. It’s to mark a point in time. So if we give ourselves an out…”

He trails off, then starts again: “Everything you do defines you,” he says, “And you should live with that. Whatever it is.”

I’m with Zuck: whatever it is, I want to live with it, because that’s what it means to live. Perhaps, like Sontag’s photographs, tattoos are indeed memento mori—but for me, they are ultimately joyous ones, offering a way to simultaneously memorialize and celebrate the present moment, to honor the inviolable now and accept the inevitable then. We can’t ever really go backwards, erase, undo—and perhaps that’s a good thing, or at least a beautiful, difficult, inescapably existence-defining thing. Perhaps that’s the argument for keeping Winona Forever forever: because she will always have been forever, once.