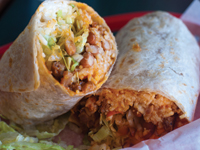 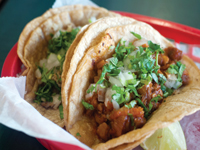 Meat with a little char, straight off the grill, tortillas with that perfect griddle-heated texture microwaves never achieve, tortas with their complexity of textures and temperatures – cram it all together to steam itself in a Styrofoam box while you drive home, and it’s wrecked. When you order at Taco King, you’ll be tempted to take your food home.  Don’t.  Taco King’s dining room is hot, as only an un-air conditioned room next to a kitchen can be.  It can also be crowded. Eat there anyway.

Grab some icy-cold authentic Mexican sodas or big bottles of water out of those coolers, or hook yourself up with some chilled guacamole, and just enjoy the whole experience.  Mostly, enjoy the food, because Taco King is as tasty and authentic as it gets around here.

To find Taco King, you have to look for the Tienda La Libertad market, on Liberty just West of Stadium. The front half of the store is now Taco King. Stand in front of the bright yellow menu, mounted on the wall over the kitchen, and a staff member will take your order for either dine-in or – if you must – take out.  Get your drinks, and find a place to sit.  Commandeer some squeeze bottles of salsa for your table. The smokey chipotle has some nice heat in the medium range. On our visit, the green salsa (salsa verde) was the spiciest, though on a previous day it was milder. They’ll give you fresh salsa too, if you order it with chips. Try everything you get your hands on; they’re all different and all good.

You can get any of the meat options in your taco, tostada, torta, quesadilla, or burrito.

Marinated pork (al pastor): tasty, juicy, just-sweet-enough, chunks of pork cooked in a red achiote sauce, with pineapple and onions.  This isn’t strictly authentic (the meat’s supposed to be cooked on a vertical spit, which we’ve been told in the past won’t get by the Washtenaw County health inspectors) but the taste is right on. One of our favorites.

Braised pork (carnitas): less seasoned and drier than the al pastor, this is a rock-solid rendition of what’s probably the most popular way to eat pork in a taqueria.

Steak (carne asada): small chunks of skirt steak, not overcooked, with a nice char. As with the carnitas, this doesn’t come with its own sauce; some (like Joe) eat it just with the onions, cilantro, and lime; others add salsa.

Chorizo: a spicy, crumbly sausage; the chorizo had a dominant allspice flavor, which is kind of unusual. Many restaurants mix it with eggs, but here it’s presented on its own.  Good, albeit kind of intense for some.

Beef tongue (lengua): if you’re willing to go a little outside the usual American comfort zone, the tongue is served in small pieces which fall apart like a good roast.

Fish: these aren’t the San Diego-style fish tacos with battered fillets, they’re tender cubes of seasoned tilapia pan-fried with onions. Mild flavor that definitely needs a good squeeze of lime, but once you do that, they’re outstanding.

Lamb: the lamb is on the dry side, but not in a bad way, and the flavor’s outstanding. Even better with the hot chipotle salsa.

Authentic Mexican tacos don’t have cheese and lettuce on them, and don’t come in anything called a “shell.” You choose the meat you want, and they’ll cook it, put it on a pair of grilled corn tortillas (if you use just one, it can soak through), and sprinkle it with finely-chopped onions and cilantro. At Taco King, the proportion of meat to tortilla is perfect. Tacos are served with quartered limes (squeeze to taste) and the option of salsa. For most people, 3 tacos will be a full meal, and at $1.50 per taco, a pretty cheap one.

If you’ve ever eaten a burrito where there's more wrapper than filling, you'll be glad to know that's not the case at Taco King. Rice, beans, lettuce, sour cream, cheese, and your choice of meat (any of the ones included in tacos) in good well-balanced proportions are tightly rolled up in the perfectly-sized flour tortilla that wraps the entire burrito without dominating the filling. We tried ours with the marinated pork (“al pastor”), and we heartily recommend it because of the meat’s intense flavor. These are substantial!

In Mexico, a torta is a sandwich served on a crusty white sandwich roll. Filled with your choice of meat and lettuce, pickled jalapenos, guacamole, and mayo. We tried the Chicken Milanesa and the chopped steak.  The first was so delicious that we ordered a second! It was just as good. We particularly like the Milanesa style with the pounded and breaded slice of chicken or beef, which is not one of the taco meats and may not be listed.

Mexican style: We preferred the pork and the bean varieties over the chicken. Unwrap the corn husk and dig in with a fork. Add some salsa for an extra zing.

Lisa and Joe have been blogging about food in the
Ann Arbor area (and points beyond) since 2004.
Check them out at www.kitchenchick.com.