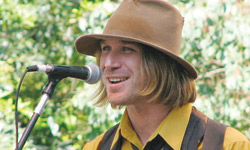 Despite getting shot at in an alley, punched in the face at one of his shows and called a name I can't repeat in this article for wearing a purple scarf in Alaska, Todd Snider is definitely one of the most likable guys in music. He has an easy-going kindness and an interest in his fans that translates into him being viewed as the prototype for the successful "slacker," kind of like your drunk liberal uncle that slips you a dime bag when you leave family Christmas. Current caught up with Snider — who just ended a leg of his tour in Alaska — to talk about the wild stories from above the connected 48, his new rock band and how he met his tour manager of 15 years in Ann Arbor.

How was the trip to Alaska?

We had a blast. The first time we went up there, a friend of mine said, 'Don't ask anyone why they're there, it's not a good story.' And it seems like people are hunkered down up there, so when you do a concert in a town of 400 people, 380 will come to the concert — and they know each other; they'll take mushrooms and jump up and down. It's a strange culture up there.

So, your friend told you not to ask them to reveal their stories, but you seem like a guy that's always picking the brains of his fans…

They're all kind of similar to how someone ended up in Key West: Something bad happened someplace else and they had to leave. But I've ended up getting a lot of people's stories and I've gotten to meet a lot of those cats that do that World's Most Dangerous Catch shit. It's a wild place. They put us up in some house and there was a note, 'If you go for a walk, take a rifle.' It's a different kind of place. Rugged people, rugged terrain.

You dropped two albums basically back-to-back this year. What drove you to spend so much time in the studio?

The Jerry Jeff one came out about a month after Agnostic, but we made the Jerry Jeff one about a year before it came out, knowing that he would be turning 70 in a year and that the band and the producer was in town. We were talking about making the record and we thought, 'Well, fuck, we're here — let's do it right now.' It turned out to be a good idea, because we might not have got it done if we had left it to planning. We knocked that out and I had only about seven songs at the time and then I made about four or five more and then I usually just turn them in. I have a nice team of people that handle all that crap for me. This time I said, 'I don't wanna put them out a year from each other, let's just go ahead and put them out at the same time — cause one's cover songs, one's new songs, one's a very dark record and the other is pretty happy.

And I'm getting old: nobody gives a shit. It's not like I have to worry about the normal, practical stuff that a young rock band would have to care about. And in my mind I thought, 'then I'll just stop making records and start doing other stuff.' But now I'm wondering about that. I've been telling my manager for four months that I'm finished, but I think I have a couple new songs started. I'm trying not to make them up, but, fuck, they just keep coming.

Have the new songs derived from recent experiences?

Yeah…and I've been doing folk music my whole life and I recently started this rock band we started in my neighborhood. We just played this past Saturday night. We're called Elmo Buzz & The East Side Bulldogs [Snider, Bobby Bare, Jr., Elizabeth Cook, Tim Carroll]  and we got Bobby Keys from the Rolling Stones as our saxophone player and we just play balls-to-the-wall rock. No slow shit. Everyone of my records has one fast, Chuck Berry-like song. But that's all we do. We don't play any of my songs. We do cover songs or songs we make up in the moment. Since these last two folkie records came out, that's where my energy has been going. Then the songs turn into words, then you have to remember them, then — all of a sudden — you're writing songs, then you gotta do it or not. Now I think I might do it. I have a few ideas going.

Do you have any stories about Ann Arbor?

I was playing someplace at some little festival in Ann Arbor. I was on my second tour and we were playing at some sort of backstage event. I was doing a radio interview and, as I was doing it, I could see — over by the stage — that the security had found this guy that looked like he might not have belonged backstage. I witnessed this guy be asked for his pass and could see he didn't have it. And it caught my eye. I was distracted by it. Now there's three security guys around him and it looks like they are about to drag him off and he's talking 100-miles-an-hour and then I see him, out of the corner of my eye, as he's talking, point at me. I thought, 'What do I have to do with this.' So, one of the security guys comes over to where I am and says, 'This guy over here says he works for you. And he's on your crew.' And I said, 'Fuck…sure.' I asked him if he could roll joints and he said, 'On the head of a pin in a hurricane.' I said, 'Alright, get your shit.' And Elvis [Hixx] left town with us that night and he's been on the crew since. He's been with me 15 years and around the world twice. He is our tour manager. He plans all the travel: the hotels and the buses. He is just the most loved guy in music. I'm not kidding. He's the one that makes all the friends on the road; I just sit in the little box and wait to go on.