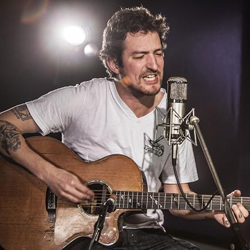 There is a sad, deflating theory that there is nothing new under the sun; that the human race has run out of creative ideas. As it applies to rock and roll, the fable goes, there’s nothing original to stick in your ears. Pop, rock and roll—whatever you choose to call it, now seems nothing more than a series of rehashed chord progressions, recurrent verbal sentiments and redundant guitar solos, all sewn together with a stompin' beat.

End of the world, indeed.
And yet, when you watch Frank Turner's video for "Recovery" (scan QR Code above) all the doom and gloom of musical pop culture just doesn't matter. Turner and his band, The Sleeping Souls, are depicted in the video playing in what looks like a large warehouse with a dancing crowd. The video is artistically clipped into horizontal (and then vertical) thirds. Each segment of the screen cleverly slides to cover and reveal parts of Turner with caricatures of skeletons, sea captains, etc. While the images are pretty catchy, it would be overstatement to describe it as artistically shattering.

Turner delivers clever lyrics (So I've been pounding on the floor and I've been crawling up the walls/ And I've been dipping in my darkness for serotonin boosters/ Cider and some kind of smelling salts)  at the top of his vocal range, and bolsters his songs with catchy melodies and a solid supporting band. Everything about his music just works. One listens to him and thinks 'this man could have been part of the British Invasion of the 60's.' The whole Tape Deck Heart album is filled with great tunage. In fact, the whole Frank Turner back catalog is worthy of your auditory attention.

During his youth in Hampshire, England, Turner started out in a punk band called Kneejerk, and despite the pop and folk overtones of his solo career, the energy and vitriol of punk still runs in his music. One might think that the mixing of two disparate music styles (folk and punk) would make it difficult to find a following. "Some people I knew from the punk scene back in the day have made snarky comments about what I do now, but I think that has a lot more to do with success than anything stylistic,” Turner says. "My duty as an artist is to make the best music I can. Whether any part of that alienates anyone isn't really my concern.”

Turner’s first favorite band spearheaded a different kind of british invasion—the New Wave of British Heavy Metal. "The first band I fell for was Iron Maiden,” he says, “and from there I spent a couple of years as a proper metal kid. Then Nirvana showed up and steered me towards punk rock—The Descendents, NOFX, Black Flag and so on." The power-cord bombs of punk and metal remain in turner's music, and give otherwise pop songs some much-needed gravitas.

Though "Recovery" is a story of making one's way back from a bad relationship (as well as a rockin' love song), Turner is not afraid to use his music to make political and social statements. "My politics come from considering the world around me, and from my voracious reading of history (of all times and places)," Turner says. "I'm a classical liberal, really—Thomas Jefferson, Adam Smith, that kind of thing. I am optimistic about the future. We live in a pretty special time in human history, by most all metrics."

Songwriting as learned art
Because of his background in bands with various musical leanings, he's had to adapt to a changing style of songwriting. " I feel like I've learned about songwriting as a craft in itself, detached from genre considerations," Turner says. "I've also written a lot of songs and am keen not to repeat myself, so you have to dig a little deeper as time goes by; but the flipside is that, hopefully, you find something more interesting."

So how far would he like to see this go? "I'm curious to see what happens when I push on the doors that I come across, and I don't want to get bored. With those as my guiding principles, I'm happy to just see what happens."

Even at the relatively young age of 31, Turner's got some road scars. "The road has its ups and downs," he says. "I've lived like a king and slept like a tramp. I've been running since 1998 (constantly since 2004) so I've covered a fair few miles in my time. On balance though I love it, wouldn't trade it for anything."

During Turner’s TV appearance on Conan O'Brien, his on-camera apprehension was palpable. "Ha, well, that was kind of a new one for me. TV is strange," he says. "It's kind of like playing in a vacuum. Trying to find a way to throw your heart and soul into a song in front of a camera is something that you have to work on. It was good to do though." In his defense, he looked much more at ease recently on Letterman.

Rock stars come and go, but every once in awhile, for whatever reason, one will stick and have substance. Such is the case of Frank Turner, whose persistent sincerity is, in no small part, the reason he’s still climbing.

Frank Turner's Monday, August 5, show at The Blind Pig is SOLD OUT.