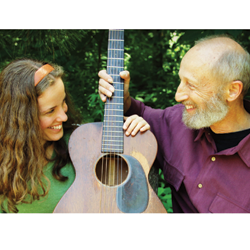 Between the two of them, father-daughter duo San and Emily Slomovits have an extensive history at The Ark. San, a frequent Current contributor, has been playing shows there since 1973. Emily first joined him onstage ten years ago when she was just nine years old. Since then, she’s become an exceptional violinist and vocalist, performing her original folk music both solo, and with her dad or other musicians at venues throughout Michigan. On Saturday, August 10th at the Ark, the two musicians will perform as part of the CD release party for their debut album Innocent When You Dream. The album, which is one part folk and one part jazz, features the father-daughter duo’s beautifully blended harmonic vocals and tender songwriting.