RoosRoast has expanded by tearing down a wall, adding an arch, new furniture and a wrap around bar. In addition, they now serve low sugar, whole grain pastries to accompany their signature coffee choices. 1155 Rosewood St. 734-222-9202. roosroast.com

The owners of the State Theater are exploring the possibility of transforming the upstairs, two-auditorium space into either a renovated theater, a commercial office space or a residential space. It’s just an idea at this point, but, the State Theater could begin a transformation within the next few years. 233 S. State St. 734-761-8667. www.michtheater.org/state/

The former Hollywood Video store at 1480 Washenaw, vacant the last 4 years, will now be occupied by Nankin Hobby. The business is a children’s toy and craft store. 734-961-7575. 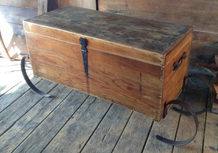 Renovatio Woodworks, a business that sells pieces made of re-purposed rustic wood, has opened above Smokehouse Fiftytwo  at 125 S. Main St. in Chelsea. 734-475-0985. Facebook.com/pages/Renovatio-woodwork

Ginger Deli, a Vietnamese sandwich shop owned by Ann Arbor entrepreneur Te Phan, is slated to open this month on the corner of South Division and East Liberty. The takeout business will have ranging from pho (noodle soup) to classic banh mi sandwiches.