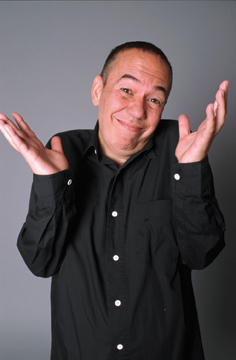 Gilbert Gottfried is squeaky sure, but definitely not clean. The comedian, whose grating voice squawked it’s way into my heart circa 1992 in Disney’s Aladdin, is a veteran of stand-up with a style so filthy his last special coined “The dirtiest joke of all time.” Fresh off a stint of reality TV appearances, Gottfried is hitting the road and will be unleashing his heinous humor on The Magic Bag stage Friday, December 6. The City Paper sat down with Gottfried to talk the origin of his signature screech, the nature of offensive humor, and how to walk the tight rope between saturday morning children’s programming and hardcore porn. But to my surprise, I was greeted by a gentle soft spoken voice on the other end of the receiver…

BD: Thank you so much for doing this. I’m a big fan and really appreciate it.

BD: So let’s hop right in. I’ve gotta say, I can’t help but notice your on-stage voice and your conversational voice are almost polar opposites. How did end up with the trademark shrill persona?

I don’t know, I never really… there was never any thought involved in it. To me it was always kind of like, anybody in any line of work, talks a certain way or moves around a certain way or pronounces things a certain way. I don’t think any of them ever really said, “I’m gonna work on talking this way, or moving my legs or arms around this way.” That was the way it kind of was with me, I just kept going on stage and one day I figured, “Oh, this is my delivery.”

BD: Your sinister comedic alter ego so to speak?

BD: So is that persona lingering in the back of your mind, when writing or a new idea comes up? Or do you just clock out of it when you’re not performing?

Yeah, I never think in terms of that voice. In fact I wish I had a better work ethic. [Laughs]

BD: What strikes me about your writing style is how different it is from most of today’s comics. A lot of what people see in stand up these days is either bit humor, or stories from comic's lives, whereas your style is more based around classic joke structure. Is it more difficult to do? Where do you pull inspiration from?

Wow, I don’t really know. You know, there are certain people, like I know Seinfeld was always a worker. He’ll sit down for a certain amount of hours a day, and write bits and write jokes. I never really worked that way. There were bits—stuff that came to me on stage—that each time after that I’d start repeating it and honing it. I never really knew. Like I said, I’ve got a terrible work ethic.

BD: Another thing that is odd about you, is that you're probably best known for your squeaky-clean Disney stuff, Problem Child, and even reality T.V. as of late. But when you watch your Dirty Jokes special or your roasts, it’s really dark and dirty material. Is it hard for you to reconcile those two personas?

BD: [Laughs] Are you indulging one side more than the other lately?

Not really. But, it is a strange thing to go back and forth like that.

BD: What’s interesting in comedy now, is that dark/shock humor is becoming more and more prevalent even though it’s been around forever. However, simultaneously there has been this rash of comedians having to apologize and society in general being very standoffish with people pushing the envelope. And I bring it up because a few years back you became the figurehead of this after Aflac fired you over tweeting jokes about the Japanese tsunami. Has that changed what you put out there?

It’s a very strange period we’re going through. Especially with the internet, who knows if it’s just a period or it will stay like this. And with that, now everyone has an opinion, so everyone can take offense to things. I feel like now-a-days every joke should come with a set of instructions; if you like the joke laugh, if you don’t like the joke don’t laugh. It’s like the idea of forming an angry mob for every joke or remark that you take offense to. It’s gotten pretty insane.

BD: Has it changed how you write at all? Is there anything that’s off limits to you?

No. Well, it’s like when people ask me, “Do you think twice about saying stuff now?” And I always go, “I think twice, but I do it anyway.”

BD: I appreciate that. It takes a lot of balls because for a long time clubs wouldn’t book really filthy comedians. Granted you can probably name your shows these days, right?

Yeah, but nowadays if Charlie Chaplin was around he’d have to print out formal apologies for the stuff he did. It’s like everything is offensive.

BD: Do you find it strange that comedy is one of the the only art-forms I feel still comes under that level of scrutiny? Do you approach your material as, "This is my art and I refuse to censor it?"

I really try to avoid terms like, “art” or “artist” because that makes you take yourself a little too seriously. I still think of art in terms of, if someone has a canvas and a paint brush, that’s art.

BD: And you're just a comic.

BD: Speaking of art, you’ve been doing a lot of reality tv lately which seems like a precarious fit for you. How did that come about with Rachael Ray, Wife Swap, etc?

I did these shows, first with Rachel and Guy’s Celebrity Cook Off, and people were stopping me in the street and joking that they want my peanut butter and jelly recipe. And I realized how many people were watching it. So then I did Celebrity Wife Swap which I really didn’t want to do, and finally I did it and people come up to me still and that was months ago. I kind of feel like when I was turning it down, I was looking down at stuff. It’s like turning down movies because, “Oh I’m a Shakespearean theater actor.”

BD: You want to be the Taxi Driver of fart jokes.

BD: So at your shows, is there a disconnect in the intended audience because of your clean persona drawing in people who would be offended some of the darker jokes your stage show employs?

I don’t know. I think the majority that come to night clubs aren’t shocked by it. Even if people have seen me do clean stuff, there’s a good chance they’ve heard me on the radio, doing roasts, or the Dirty Jokes dvd. After a while I think everyone gets to watch everything.

BD: When it comes to the Comedy Central Roasts, I’m always left wondering just how much of the jokes each performer writes themselves cause there’s always a huge list of writers scrolling by on the end credits. Do you have a writing team with you?

BD: Do you have a preference for doing TV/movie productions versus stage performances?

BD: [Laughs] So what are you touring now? Is it a special with a theme or just trying out new material? Building toward anything?

No, it’s like I said, no work ethic, no real thought involved. I always think it’s so funny,I think of tours in terms of people traveling on a bus with all their equipment. Im doing a bunch of jobs, I never thought of it in terms of a tours, maybe they are tours.

BD: Are you just hopping in your car and rolling solo or do you have any one traveling with you?

No, no team. Just go on a plane or a train and get to where I need to go.

BD: What’s the down time like? Is it lonely being in these seemingly foreign towns alone, or a bit more strange since you’re famous?

I tend to go a little nutty in hotel rooms. I don’t know what to do. Usually my days are filled up doing loads of press sometimes. which is good and bad. Press can be tiring, but it keeps me from watching a lot of horrible TV, and just snapping away at the remote control, or looking at myself in the mirror, then riding the elevator down, and walking around the lobby, then go back to my room. It’s kind of psychotic behavior.

BD: So you feel cooped up in some strange place.

BD: Do you have a go-to way to break out of that—head down to the bar and meet people?

No, no, sometimes it’s like I’ll be in these hotels where there is no sign of civilization it looks like. If there’s a horrible shopping mall, to me that’s a godsend—at least there’s somewhere to take a walk at.

BD: You’ve been doing comedy since you were 15 years old. Do you still actively watch comedy?

If I run into other comics we’ll talk or whatever. But as far as watching comedians, to me it’s like going to work on your day off. And I’m a horrible audience because at the very best I’ll watch a comic and if they absolutely kill, I’ll just go, “Oh that was kind of clever.” You don’t get real joy out of watching a comic.

BD: Is there anything you’ve seen lately that impresses you?

You tend to get used to it.

BD: Is there anything you’re working on that people should be aware of or checking out?

BD: What do you think about twitter as a forum for comedy?

I still don’t quite understand the internet. Like I’ll send out tweets and I don’t really know what purpose it’s serving.

BD: I think we all feel that way.

BD: Well thank you very much for doing this, I appreciate your time and I can’t wait to see your show.

Gottfried will be performing December, 6th in Ferndale, MI and The Magic Bag Tickets are available here.