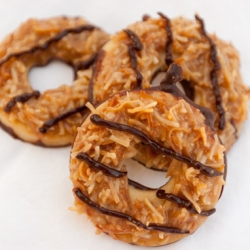 A South Carolina man has been charged with stealing 450 cases of Girl Scout cookies from a Spartanburg warehouse. Christopher Maurice Morton is being charged with breach of trust more than $10,000 after Greenville County deputies found 352 cases of Thin Mints and Shortbreads along with Morton behind an abandoned business. I must ask, why only Thin Mints and Shortbreads, Christopher??? Everyone knows that the two best types of Girl Scout Cookies are Samoas and Tag-A-Longs. Next time go for the good stuff. More

Caroline Guy, of Staffordshire, U.K. is claiming that a giant frozen chunk of pee from an airplane crashed through her mobile home last Saturday night. The giant urinary projectile apparently left an 18-inch hole in her roof and another in the floor. A spokesman for the airline claimed that these incidents are 'rare', but that doesn't mean that they don't happen. I for one think this lady should be compensated. Not only could she have died, but she had multiple people's frozen pee explode all over her trailer. Hopefully the sounds of airplanes passing overhead don't haunt this woman forever. More

A Case of Mistaken Identity

Brianna Priddy, a waitress at Applebee's in Lakewood, Colorado got her sweet revenge after having her wallet stolen earlier in February. After finding out that someone had used her ID and check book to write hundreds of dollars in bad checks, a woman came into her Applebee's and used the Priddy's stolen ID to try and buy a margarita. Priddy returned the ID and told the customer she would be right back with her drinks. But instead, she went straight to the back room and called the cops, who apprehended the suspect and charged her with identity theft and criminal impersonation charges. Ahhhhh karma, you work in strange ways. More