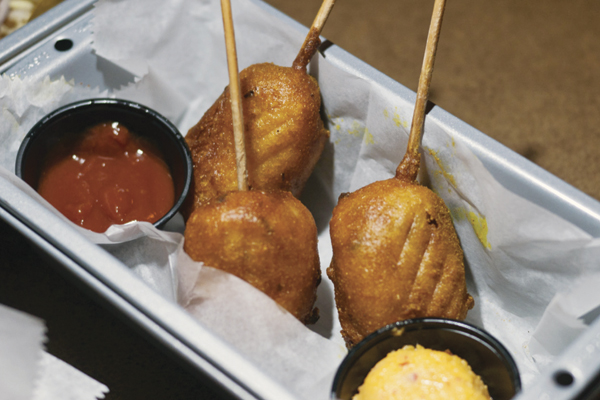 The Wurst Bar has a college bar feel, not surprising given its proximity to the EMU campus. On a week night, it feels welcoming to all. At first glance, it doesn't seem like the place where you'd find gourmet sausage, or really gourmet anything. The sparsely decorated walls — a few pieces of art and posters — speak to its newness.  A cluster of high tables fills the center, lower tables and curved booths line the sides. Funky red crystal and antler chandeliers hang along one side of the room.  Just inside, a large chalkboard off to one side lists the day's specials and tells you to seat yourself. Do pause to read the specials as they are worth checking out.

What sets The Wurst Bar apart from other establishments is its menu. “I wanted to do gourmet food, but at a college price point,” says Chef/Owner Jesse Kronyak, “and making sausage was a great way to do that!”  He’s right.  Their brats, made in house, range from the usual spiced beef and pork to the exotic, like rattlesnake, alligator, and rabbit. (The exotic meats won’t jump out at you in flavor – you won’t say “whoa, that’s what rattlesnake tastes like!” – but it works, because the brats made from them are excellent.)  They even have vegetarian brats.  Also unlike the usual bar, their key items are made from scratch or bought from unusually good suppliers, local where practical. They grind their own meats (or vegetarian ingredients) to make their sausages, get their challah and pretzel buns from Zingerman’s Bakehouse, and make their own pickled condiments. Beverage-wise, the Wurst doesn’t slack, with a spectacular range of craft beers and unusual local beverages such as mead from B. Nektar.

You'll find four mustards and a bottle of ketchup at your table. There’s a diagram to tell them apart, though labels would be nice.  Basic yellow, dijon, stone ground, and cajun. 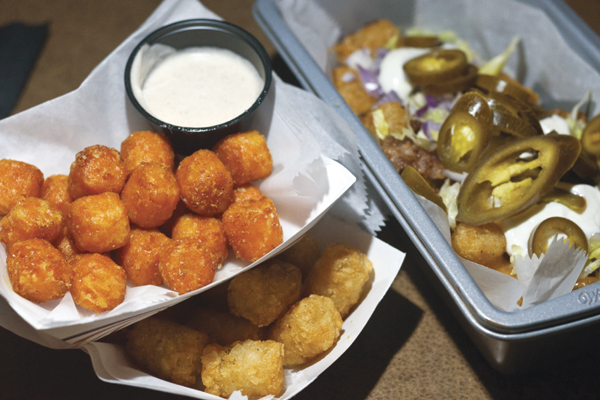 Tater Tots and Sweet Potato Tater Tots: though not made in-house, they’re a tasty accompaniment and were perfectly fried to a light crispness. The sweet potato tots were served with a disturbingly addictive marshmallow fluff & cinnamon sauce.

Tater Tot Nachos: in a great twist on the basic bar nachos, The Wurst Bar takes a pile of tater tots and tosses them with the usual nacho toppings – cheddar cheese, sour cream, zippy jalapenos, and ground beef. Large enough to be a meal in itself, or shared with a good sized group. A vegetarian version is also available.

Curry Wurst Mini Corn Dogs:  Herta Heuwer is said to have invented currywurst (a dish so popular in Germany that it has its own museum), back in 1949. The Wurst Bar does their take on this by using three slightly crumbly mini-curry wursts wrapped in crispy corndog batter. Served with pimento cheese and a curry-spiked ketchup. A great combination of flavors.

Your first choice is between a preztel bun or a challah bun. Both are delicious, but when choosing, consider whether you want the heavier pretzel bread or the softer challah. For softer sausages like the Boudin, you’ll want the softer bun.

You can also add a variety of toppings all made in house: Sauerkraut, Kimchi-Kraut, Sauteed Onions, Sweet Peppers or Spicy Peppers. The toppings are great, and they aren’t what you get everywhere else, but the sausages are so flavorful that we’d suggest that you start by getting the toppings on the side and experimenting with them. Loaf pans lined with parchment paper serve as baskets. Make sure to look underneath your brat for a few slices of Toledo’s own Tony Packo’s sweet pickles. 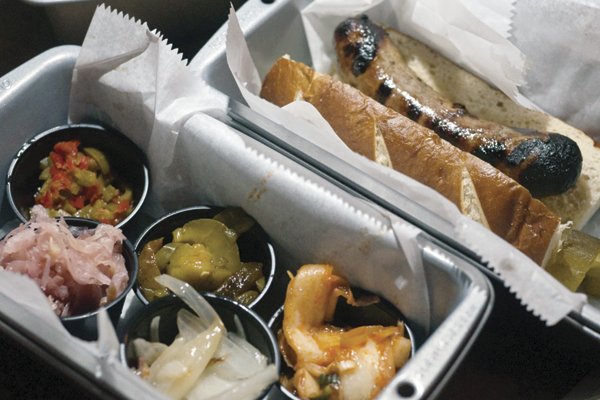 PBR Poached Brat: pork spiced with marjoram, ginger, celery seed, and coriander. Their "regular" brat is, simply put, a really good brat, with great snap on the skin, and a nice blend of spices.

Rabbit, Fig & Viognier: rabbit blended with chicken and spiced with fig, cumin, coriander, and the viognier. This wurst has a light sweetness from the fig and the wine, with cumin and coriander lending additional depth.

Bison & Lamb Merguez: a blend of bison, lamb, pork seasoned with harissa, sumac, and fennel.  Adding the lamb to the buffalo raised the fat content just enough to make it juicier, but it’s still drier than some. It’s great with the spicy peppers.

Vegetarian Apple & Pecan: tofu flavored with ginger, apple, pecan, nutmeg. Mild, nutty/savory with a bit of sweet from the apple.  This "wurst" had a softer texture; one of our group described is as sort of like a moist cornbread.

Turducken:  how can you not? Duck, turkey, chicken, pecans, cranberries, apple.  Mild, juicy brat with some sweetness, this was a favorite. A very nice contrast to some of the stronger flavored brats.  Try it with the sauteed onions.

Rattlesnake Chorizo: rattlensake, pork, chipotle, oregano, red wine.  Some say rattlesnake tastes like chicken (what else?), but others claim it’s more like allegator, quail, or frog legs. Whichever it is, give it a try. This brat earns its "chorizo" moniker with the heavy chili seasoning.  If you like your food spicy hot, this is the spiciest option on the menu (though not dangerously hot).

Alligator & Crawfish Boudin: alligator and crawfish blended with cod, brown rice, chives, red pepper, and parsley. This wurst has a delicious full-seafood flavor without being overly strong or fishy. In texture, it’s sort of like a crab cake.  Very different from the others! 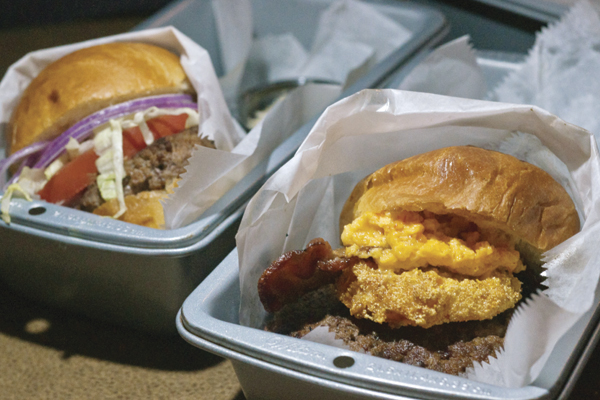 Here, you get a choice between a brioche bun and a pretzel bun.

Nut burger: a high-quality beef patty augmented with “umami spices” topped with aged cheddar, bacon, and crunchy peanut butter, this burger is in some ways the most unusual item on the menu.  The combination sounds crazy, but honestly?  It works, and it works well.  The peanut butter tastes like it belongs there.

Southern Burger: the same basic burger, but topped with a cornmeal-coated fried green tomato, pimento cheese, and bacon. The Pimento cheese melts into the patty, and the cornmeal crust on the slightly-sour tomato is just awesome.

So far, this place hasn’t been excessively crowded, but we expect that to change, so keep in mind that you might have trouble getting seating at core bar hours.