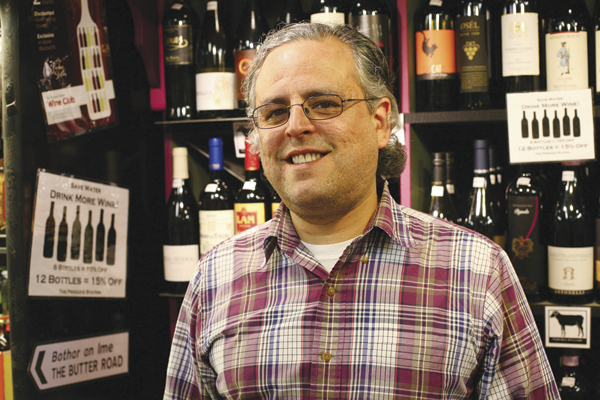 When I accidentally stood up Jorge Lopez-Chavez, the Produce Station’s “wine director,” for a recent lunch meeting, I had trouble getting ahold of him. He has no cell phone, and until they recently set up a Produce Station account for him, no email. Jorge (pronounced HOR-hey) is old school. He listens to vinyl. He reads old paperbacks. He’s even got a landline (albeit with a decidedly modern answering machine).
So how did this casual, good-natured Peruvian native come to settle in Ann Arbor, and find work in the sophisticated field of wine sales? Jorge always loved good food and drink. He believes that Peru’s cuisine is underrated and will be “up and coming,” Moving to Puerto Rico at age 12, he reveled in the comforting meals of “grease, fat, and pork.” He stayed there until 11th grade, when he went to live with an aunt in Farmington Hills, earning a full ride to the University of Michigan.

Unfortunately, he flunked out. “Ladies and parties,” remembers Jorge. He earned his degree five years later. In the meantime, he got a job at Village Corner, where he did it all – counter sales, cooler, beer, manager, and butcher. He told owner Dick Scheer, “I’ve done everything here, Dick, it’s time to move on.” Dick retorted, “You haven’t done
wine sales.”

So Jorge became a wine salesman, focusing on wines of the USA, southern hemisphere, Germany, and Western Europe from VC’s fabled wine section. At Dick’s urging, he read Hugh Johnson’s “World Atlas of Wine,” and also learned among the other veteran salespeople, attending tastings, including first and second growth Bordeaux from the storied 1982 vintage.

When VC closed in 2010, its wine staff scattered. Jorge ended up at the Produce Station, where manager Andrew Gorsuch has been fully supportive, collaborating on promotions and giving Jorge free rein. Jorge lowered markups and sales shot up. He increased the visibility of the wine department, with his popular monthly “Uncorked” tastings at the Alley Bar, and special events at the Ann Arbor Art Center.

But Jorge had a problem: he would get nervous before presenting. His initial strategy was a shot of tequila, but over the course of a few months, he gained enough confidence without it. He studied hard and learned to speak without notes. Local beverage consultant Ari Sussman reminded him, “People are interested in the stories more than anything else.” So Jorge told stories. At a recent tasting of Argentinean wines at the Alley Bar, Jorge was cool and unruffled, greeting guests unhurriedly before speaking. Weaving history and culture, he talked about how Italian, German and French settlers eventually assimilated with the Spaniards, bringing soccer from Europe — all to explain why an Argentinian grape was called Bonarda — “one of three different grapes with the same name in Italy.”

The Uncorked tastings at the Ann Arbor Art Center, held about twice a year, are incredible events. Jorge will bring between 40-50 wines, with about six per table, grouped logically among the artwork. The event is designed for mingling, sumptuously catered, and draws fans from wine aficionados (meticulously taking notes in their catalogs) to young couples on a date. It’s a great example of Jorge’s unpretentious approach to make wine accessible, and to appeal to people who want to learn about wine at their own pace, while also having a good time.

From his Peruvian roots via Puerto Rico, Jorge Lopez-Chavez has found a home in Michigan. He can speak eloquently of the Porcupine Mountains and Pictured Rocks, to the cosmopolitan nature of Ann Arbor, of which he has only one problem: “There’s no Peruvian restaurant.
We need one.”

And no doubt, he would know the right wines to pair with its cuisine.

To get on the Produce Station email list, send Jorge a carrier pigeon note to wine@producestation.com or follow his tweets @WineAnnArbor.