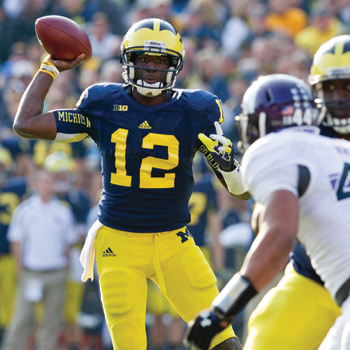 The “Western Conference” began competitive play with Michigan, Illinois, Northwestern, Minnesota, Purdue, Wisconsin and Chicago. There were only 45 states in the Union.

Wisconsin won the inaugural conference season with thrilling victories over Lake Forest, Madison High School—yes, high school—Grinnell, and Beloit; along with wins against Chicago and Minnesota. Their only loss was to the Carlisle Indians, who were real Native Americans. That’s the school Jim Thorpe went to 15 years later.

1899 – Indiana and Iowa joined the conference. Chicago won the title, the first of seven for legendary coach Amos Alonzo Stagg.

1912 – Ohio State joined the conference. Women were still not allowed to vote. New Mexico and Arizona become the 47th and 48th states, respectively.

1924 – Illinois stunned Fielding Yost’s defending national champions of Michigan, keyed by five touchdowns from the Galloping Ghost, Red Grange. Michigan’s defense had only given up 3 touchdowns in their previous two seasons, plus the first two games in 1924, before this game. Grange scored four times in the first quarter alone.

1950 – Chicago had left the conference four years earlier, to be replaced by the “Michigan State College of Agriculture and Applied Science.” The U.S. was still stuck on 48 states.

1969 – Michigan’s new coach Bo Schembechler and Ohio State’s coach Woody Hayes commenced their “Ten Year War” with perhaps the greatest win in Michigan history, a stunning 24-12 upset over what many considered to be the greatest college football team of all time.

1990 – Penn State became the eleventh member of the Big Ten, which stubbornly refused to change its name or number.

2008-2011 – Michigan temporarily ceased its football program, instead filling its stadium with a circus side show led by Tricky Ricky Rodriguez. Tremendous embarrassment ensued.

2011 – Nebraska became the 12th team in the conference, which obstinately remained the Big Ten. Paradoxically, the Big 12 has only ten teams. Nebraska’s modest academic standing saved Michigan State from being the lowest ranked academic school in the conference.

2012 – It was also announced that Rutgers and Maryland would join the Big Ten for football commencing with the 2014 season.

2013 – The unbridled excitement continued, with Johns Hopkins joining the Big Ten as an affiliate member for men’s lacrosse. Would Madison High School be next?

The coming Big Ten football season will feature the last season of two-division play; the “Leaders” and “Legends” will be phased out next year. In the meantime, despite the great strides Michigan has made in recruiting and competitiveness under coach Brady Hoke, Ohio State is favored to win the conference, and perhaps the national championship.

Urban Meyer was hired to coach the Ohio State Buckeyes in 2012, surprising everyone who actually believed him in 2010, when he announced his retirement as Florida’s head coach to concentrate on “faith, family and his health.” Hoke and Meyer are in the second year of what could ultimately be a rivalry the likes of Bo and Woody. Meyer edged Hoke last year, 26-21, to cap an undefeated season and deny Michigan a share of their division title. He continues to outpace Hoke in recruiting and rankings, but Michigan is right on his heels.
Making change

While Michigan’s return to football prominence is welcome, other ‘updates’ are more controversial. This year marks a change in student seating at home games, from reserved seats to general admission, angering upperclass students who anticipated having seats near the 40 yard line according to previous practice.

Other ticket prices continue to rise, with season ticket fees becoming the norm not only at Michigan but throughout the country. Luxury box seating now dominates the upper tier, which was once reserved for the ring of wine bottles that would be passed to the back row as they were emptied during games. Alcohol is now strictly verboten at “The Big House,” as are purses, water bottles, umbrellas and marshmallows.
Rivalry with history

Despite the corporate feel of college football today, it is all expected to disappear on Saturday, September 7, when the Notre Dame Fighting Irish visit Michigan for a night game. Their visit two years ago, for the first-ever night game in Michigan Stadium, was not only a welcome opportunity for an all-day tailgate, but one of the most fun and exciting games in Michigan history, with a 17-point comeback capped by the winning touchdown with 2 seconds remaining.

Ironically, the Michigan football team introduced the game to Notre Dame in 1887, stopping by their campus on the way to a contest in Chicago. The teams began their rivalry later that year. Since then, the two teams have been the winningest programs in college football history, with Michigan currently holding the edge.

The Big Ten has seen many changes since the teams traveled by train in the late 1800’s, and Michigan was considered the “West.” But one constant has been the game itself. From the moment of the opening kickoff to the final gun, fans’ passion for their team transcends time and history, no matter where they sit, how much they pay, or whether they’re allowed to bring marshmallows. It’s one of the few pursuits in life where tradition actually means something.